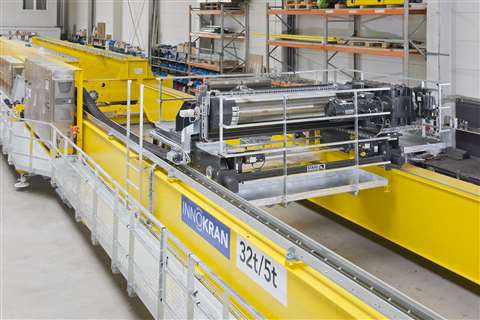 The job comes in the wake of the 13th amendment of the Atomic Energy Act, which was passed in the summer of 2011. The Act saw a move away from use of nuclear power as a source of energy in Germany, with the government aiming to decommission all nuclear power stations in the country by the end of 2022. This has proved a fruitful source of work for Innokran.

“We completed our first job in the power plant sector back in 2012 and have continuously expanded our experience in this field,” commented managing director Christoph Fischer.

Located on the river Rhine, around 30 km (18 miles) south of Mannheim, the Philippsburg nuclear power plant (NPP) is operated by the German electric utilities company EnBW.

The first contact between EnBW and Innokran, which is a “certified partner” with Stahl, was in January 2017 and dismantling of the plant’s boiling water reactor in Unit 1 (NPP 1) started four months later.

The pressurised water reactor in Unit 2 (NPP 2) is also approaching the end of its operating life and will be shut down by the end of 2019.

The radioactive spent fuel elements of the two reactors are being stored at an interim storage facility in the NPP and are not affected by the dismantling process. 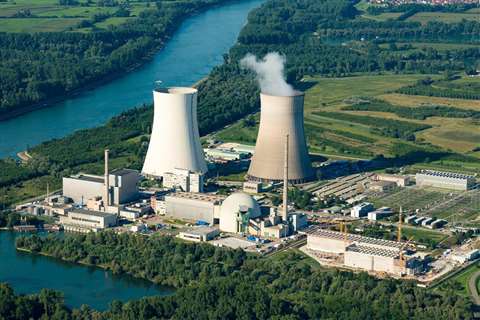 Up to 98% of the total mass can be recovered, with between 1 and 3% having low to medium-level radioactive residues.

For these radioactive parts, EnBW has built a residue processing centre (RPC) to treat them and a waste storage facility (WSF) where the radioactive waste is being be stored until a permanent disposal site is ready.

At the RPC and WSF Innokran installed a Stahl Crane Systems frequency-controlled SHWF 8 winch with a lifting capacity of 32 t on a double girder overhead travelling crane with a span of 20 m (66 ft).

According to Stahl, the SHWF 8 winch is being used with a continuously variable lifting speed range between 0 to 4 m/min.

An auxiliary SHF 50 hoist with a lifting capacity of 5 t has also been installed.

The power supply lines for the hoists are protected in an energy chain. When the load moves downwards, the generator-generated energy is converted into heat by the braking resistance and released into the environment via convection.

In addition, the systems’ brakes and measuring systems have redundancy systems to comply with industry safety standards., and the system’s switch cabinet is made of corrosion-free stainless steel for easier cleaning.

“The biggest challenge with such a plant is the complete documentation of all work processes – also those of supplier companies,” said Christoph Fischer.

“EnBW attaches great importance to this.”

This documentation encompassed stamping steel components to ensure traceability and the inspection of all welds by an external assessor.

EnBW is constructing a similar residue processing centre and waste storage facility at its Neckarwestheim site. Three Innokran crane systems will also be used there. 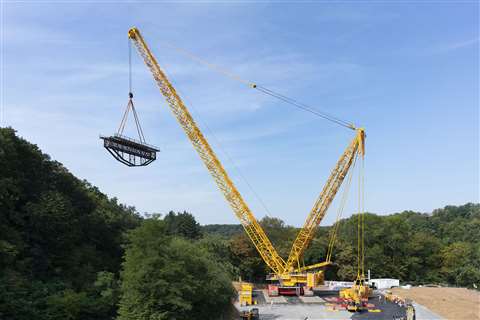 Crane contractor Wiesbauer, also based in the south of Germany, has been operating a Liebherr LR 11000 crawler crane since the autumn of 2017. The company operates on a nationwide basis and has five sites in Baden-Württemberg, concentrating on heavy haulage and industrial assembly work in addition to its classic crane business. The new 1,000 t crawler crane is currently the most powerful machine in the crane contractor’s fleet. While the LR 11000 initially exclusively tackled jobs in the wind industry, the large crane has now also shown what it can do for the first time on an infrastructure project.

The new crawler crane’s first job involved the removal of a decommissioned steel bridge. With the 100-year-old railway bridge being in a flora and fauna habitat conservation zone, the crane had to be set up a considerable distance away. The crawler crane had to remove the “fish-bellied bridge” using a radius of around 60 m (189f ft). Fitted with its 96 m (315 ft) main boom and a derrick boom, the crane moved the decommissioned lattice construction, weighing around 60 t, out of the conservation area.

More than 400 t of ballast, 225 t of which were on the derrick pallet, ensured that the crawler crane had sufficient counterweight. However, before the load could be placed on the ground, the fish-bellied girder, an arch running under the bridge support, had to be removed using flame cutters.

Marco Wilhelm, authorised signatory and project manager at Wiesbauer was also at the site. He planned the bridge in detail from setting up the massive site area on a slope to the actual hoist. The second phase of the job also had to be included in the planning because a new steel bridge weighing 150 t is to be assembled and hoisted into place in two years’ time on the large site.

This will replace the temporary structure which is currently in position. The complete performance potential of the LR 11000 will be required for this crane job. 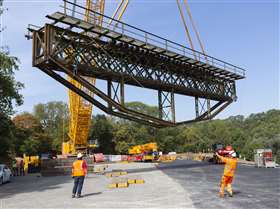 According to Wiesbauer, the crawler crane could have several hoists like this to complete during the next few years.

“We have already had several enquiries”, said Marco.

“We do not just want to use the crane in wind farms, but we are also trying to attract jobs in industry and on infrastructure projects. Just from a handling point of view, the crane is perfectly designed, very well planned and practical. And, of course, the performance parameters of this crawler crane class are ideal,” he added.

Crane operator Thomas Kley, who alternated in the cabin with his colleague Hans-Günther Zelewski, is delighted with his new machine.

“When I arrived for the crane handover, I thought that the switch would be difficult. But things went relatively quickly because the crane has a very logical design.”