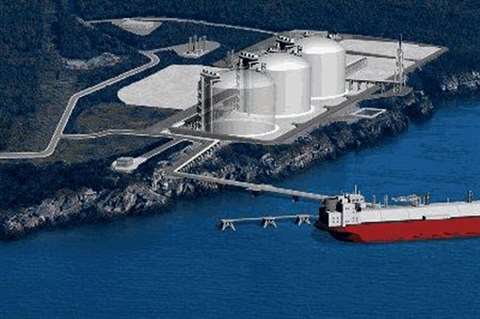 A project to construct a floating liquefied natural gas (LNG) terminal in Omislaj on the Croatian island of Krk has come under fire from residents, environmentalists and local authorities.

Supported by local residents and environmental groups, the mayor of Omislaj, Mirela Ahmetovic, has asked the Constitutional Court to assess the legal position of the project.

She believes plans for the terminal are in breach of urban planning rules and the government’s approval of a new law to fast-track the project is unconstitutional.

Vjeran Pirsic from the environmental group Eko Kvarner said, “Some 8,000 cubic metres of underwater rock must be removed with dynamite. Also, we have no guarantee that chlorine would not be involved in the regasification process. Both are potentially harmful to sea life and to water quality.”

The €250 million first phase of the project is being funded to the tune of €100 million by the Croatian government, with the European Union providing a further €101 million.

The government is keen to reduce the country’s dependence on gas imported from Russia – a policy also supported by the US.

US Ambassador to Croatia, Robert Kohorst, said the LNG terminal would be a valuable asset to Croatia, as an insurance instrument for energy diversification and security.

Meanwhile, the EU, with its own gas production winding down, is becoming more dependent on imports, increasing the strategic importance of countries like Croatia.

The terminal – with a planned overall capacity of 2.5 billion m3 of gas per year – is due to go into operation early in 2021, and aims to fulfil demand from southeastern central European markets.

Currently, however, bids have only been received for 520 million m3.