Engine manufacturer Cummins is continuing to expand the scope of its genset offering with the launch onto the North American market of its new 12kW C12D6RE mobile genset at this year’s ARA Show in Orlando, Florida, US. 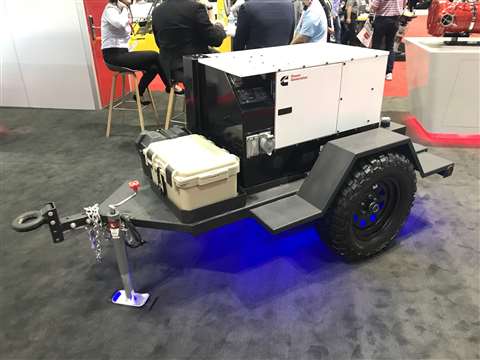 This follows the introduction of Cummins’ 500kW Tier 4 Final C500D6RE mobile genset at the 2020 United Rentals Supplier Show at the start of January, which marked an expansion of Cummins’ range at the top end of the power spectrum.

The C12D2RE been engineered to operate in extreme temperatures, from -29°C to 49°C. In addition, the unit’s weatherproof enclosure incorporates sound attenuation that keeps noise levels down to 68dB at a distance of 7m.

Designed to be robust, the C12D2RE offers 500 hour maintenance intervals and has built-in self-diagnostic capabilities to simplify troubleshooting.

Mike Bradford, Technical Support Manager, Rental Accounts at Cummins, told IRN, “This is likely to be particularly popular with small independent rental companies, which opens the door to that 75% of the North American market.”

The lowest power genset previously offered by Cummins delivers 70kW, so Bradford expects the gap between that and the new 12kW C12D2RE will be filled in in due course.