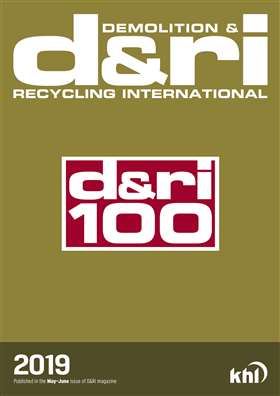 A decade on from arguably the worst financial crisis in a lifetime, demolition looks to be converting some of the optimism attributed to it in the past 12 months into real money. That is the verdict from this year’s d&ri100, the annual snapshot of the leading contractors by turnover.

With a combined turnover of more than US$6.4 billion (all figures quoted in this article are in US$), the companies making up this year’s list recorded their highest figure at any time in that decade, a whole $1 billion higher than the level of four years ago and almost $300 million greater than 12 months previously. The only way, it would seem, is up.

Probing further, it was the North America who made the difference. With many of the companies involved declaring their figures at a time that coincided with the mid-point of President Trump’s term of office, demolition as well as construction looks to be seeing the benefits.

With a slight decline in Europe being cancelled out by a small increase in the rest of the world, the performance of US and Canadian contractors mirrored the boom in the market overall.