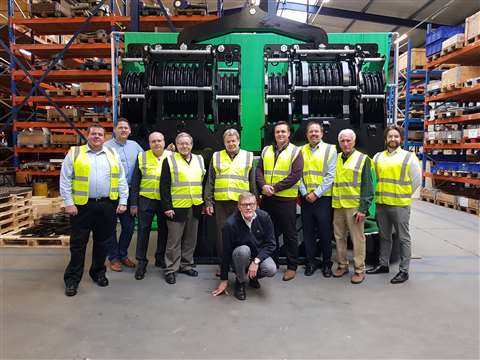 The new US representatives for De Haan stand in front of a 1,000 tonne hook block at the company’s headquarters in the Netherlands

Dutch manufacturer of lifting blocks and wire rope and chain accessories, De Haan Special Equipment, has appointed a group of companies to represent it in the USA.

The seven companies will give De Haan representation across the country. It is the first time the company has had appointed sales and distribution representatives.

On offer will be hook blocks, snatch blocks, hooks, wire rope sockets and other rigging accessories. Crane owners, crane dealers and original equipment manufacturers (OEMs) will be target customers. De Haan forecasts that within four years it will have a market share of at least US$7 to 10 million.

After an initial meeting in October 2019 in the USA, the first representatives’ day took place in January at De Haan SE in the Netherlands. As part of its launch the company and its new representatives will be all present at the ConExpo exhibition in Las Vegas in March 2020.