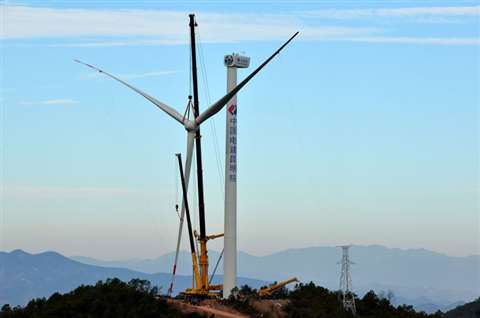 A 2,000 tonne capacity XCMG XCA5000 all terrain crane has completed the installation of a 2 MW wind turbine

A 2,000 tonne capacity all terrain crane from Chinese manufacturer XCMG completed its first installation of a 2 MW wind turbine in Yunnan Province, China

The XCA5000 arrived on site after a five-day journey crossing seven provinces, a spokesperson said. The journey included driving through 10 km of rough mountain road, with tight turns, snow and several inclines of more than 30 %.

The site was situated more than 3,000 metres above sea level. Challenges included a working area of only 600 square metres and strong winds.

The first task for the XCA5000 was to install the 22 metre high lower tower section onto its foundation base. It weighed 68 tonnes. Once installed, the all terrain lifted the remaining two tower sections into position, giving the tower a height of 81 m.

Heaviest of the loads lifted was the 91 tonne nacelle, which measures 8.5 m long, 4 m wide and 4 m tall. Wind speed at the time of the lift reached 16 metres per second, a spokesperson said.