Demolition at a distance - new demolition robots from Husqvarna 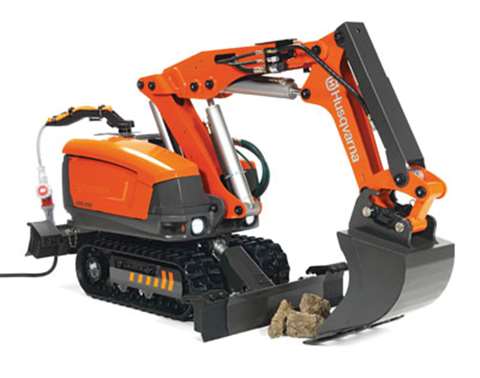 Husqvarna will use the bauma trade show in April to give its new DXR250 demolition robot its formal European launch, following on from its introduction at the World of Concrete earlier this year. The DXR250 weighs in at 1,620 kg (3,564 lb), has a working reach of 4.5 m(14.8 ft) and has a power rating of 18.5 kW (25 hp), although a 22 kW (29.5 hp) version is available. According to Husqvarna business manager demolition equipment Thomas Nilsson: "We have developed our new robot because we know there is a demand for a machine in this size class. The DXR250 is compact and flexible to operate."

But Husqvarna has not stopped there. Bauma will also see the launch of a third even smaller machine in the form of the DXR140. Detailed information on this new machine was not available at time of going to press, but D&Ri again hopes to report more fully on it in the March-April issue.