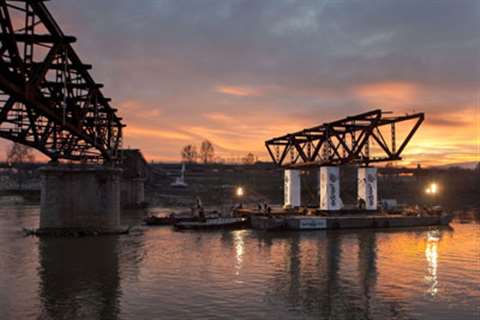 The 2010 World Demolition Awards Contract of the Year went to Despe srl, who was cited by the international judges as having carried out an extremely challenging contract with efficiency and expertise. To quote members of the panel: "the judging panel was looking for the extraordinary - that is what Despe provided"; "Despe made a very complicated job easy" and "From the submission, it is very clear that Despe knew exactly what it was doing."

The Award was made to Despe for the work it carried out for main contractor ANAS on the partially collapsed 1 km long Piacenza-Lodi road bridge that spanned the Italian River Po. The bridge formed the sole road link between the two Italian provinces, thus necessitating a rapid response to minimise disruption to the civil population.

Despe commenced work in September 2009, and had to contend with a number of constraints imposed by the contractor. First, no work could be carried out from on top of the bridge structure because much of it was unsafe. Second, all the existing support piers for the bridge were to be retained. Third, there was to be no adverse environmental impact on the river and its environs of any kind arising from the demolition activities. Finally, all demolition had to be completed within a 90 day window.

The most challenging feature of the job therefore arose from the fact that much of the work had to be done from the surface of the River Po itself. A particular challenge was the need to remove steel girders in absolute safety, both in terms of the environment and the personnel involved in the task.

Operating from the water to remove structures of great weight is not as simple as when removing them from the ground. Currents in the water can compromise stability and there are also uncontrollable changes to the river's depth arising from rainfall and, particularly, sudden thunderstorms. As a result, close collaboration between Despe and AIPO (the local agency with responsibility for the River Po) was essential. AIPO regularly briefed Despe over the state of the river, covering probable water heights and possible flooding. The next day's programme of works could only be established the evening before on the basis of these AIPO updates, and on a number of occasions work had to be suspended until after the river had fallen to appropriate levels.

In addition to these constraints, Despe was restricted in terms of its working envelope because of the presence of a temporary pontoon bridge that was being put in place just 50 m (164 ft) away. On a number of occasions, working methods had to modified or even changed completely because of this limited working space.

The bridge in detail

The Piacenza-Lodi bridge was made up of three distinct sections. The first of these, on the Lodi side of the river and the actual site of the collapse, consisted of a reinforced concrete structure with 14 support piers covering a total length of 208 m (683 ft).

The second central section consisted of a 600 m (1,970 ft) long steel and reinforced concrete frame consisting of eight bays, with three of the bays forming the actual river crossing.

The final section on the Piacenza side was again a steel and reinforced concrete frame also over the water, consisting of 21 bays and stretching for 280 m (918 ft).

To carry out the demolition, Despe established a double shift work pattern that together involved a team of 20 personnel. Mirroring the bridge structure itself, the work was divided into three phases that ran simultaneously at points during the project.

On the Lodi side, two 100 tonne class excavators equipped with long booms and crushers first processed the reinforced concrete bridge deck and, thereafter, the beams and piers, while a third machine carried out secondary processing of the resulting debris.

The demolition of the centre section could luckily be carried out when river conditions meant that the channel was largely dry. Steel plates were therefore laid on the riverbed to establish a roadway for 70 tonne class excavators also equipped with long arms and mounting hammers, crushers and shears that dealt with the roadbed and then the arches' metal support beams were cut and lifted out by a 500 tonne mobile crane. The beams, 75 m (246 ft) long and weighing 250 tonnes, were then further reduced in size for transport.

The Piacenza side of the bridge posed the greatest challenge since demolition had to be carried out from the surface of the river. River barges were used to support 70 tonne excavators equipped with 45 m (148 ft) high reach booms that processed the reinforced concrete. Debris from the demolition went into additional barges moored alongside, thus preventing any from falling into the water. Once this was completed, the challenge was to safely remove the steel supporting beams, with a total length of 200 m (656 ft). Despe divided the structure into three sections.

A four hydraulic jack system, custom designed and produced for the work was placed onto a maxi-barge on the river and the barge was then moored in position under the 45 m (148 ft) central section. The jacks, appropriately positioned, then raised the section, allowing Despe to "withdraw it" from its bases. Tugs then manoeuvred the barge to Maggi Island, where it was landed by a 500 tonne crane and reduced in size for onward transport. The remaining two sections were removed using the same method.

In total, 2,700 tonnes of steel and 13,500 tonnes of concrete and rebar debris resulted from the work, all of which was transported to appropriate recycling facilities. Despe completed the work within the 90 day timeframe, with no accidents or injuries, and with no adverse environmental impact.

The job itself was sufficiently challenging for most contractors, but Despe accepted further complications by agreeing to allow a film crew from National Geographic to record their work. According to Despe: "working with an American film crew, constantly on site and with specific requirements, was a major challenge for us."