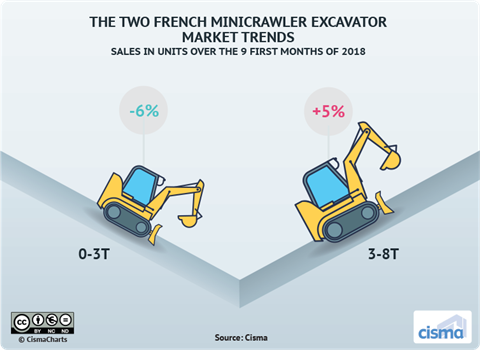 Two divergent trends have been identified in the French mini crawler excavator market over the first nine months of 2018.

The drop in the smaller of the two sub-segments was attributed primarily to a lower level of sales to rental companies, which saw a 24% fall over the nine-month period, while sales to other customers increased by 2%.

Regarding the larger of the two sub-segments, sales to rental companies were said to have remained stable compared to the same period in the previous year, while sales to other customers were up 6%.

Manufacturers are forecasting a strong fourth quarter, which is expected to give an overall 2% increase in 2018 compared to 2017.

Last year, for the first time since the financial crisis a decade ago, the French market for mini crawler excavators was said to have reached the high levels seen back in 2008, and this year the market should be even higher.