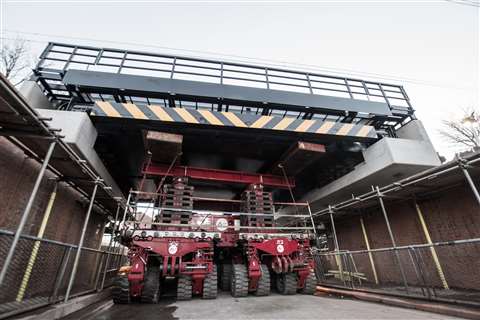 ALE jacks down one of the new bridges into place as part of a double bridge replacement in Newcastle, UK

ALE has completed a double bridge replacement in under 110 hours in Newcastle, UK.

The two bridges, which help serve 36 million passengers every year, were replaced as part of a modernisation project for the region’s metro system.

To carry out the replacement, ALE first had to remove the old bridges. The 55 tonne structures were jacked up off the abutments using climbing jacks mounted on self propelled modular transporter (SPMT) trailer beds, before transporting them to a laydown area almost a mile (1.5 km) away.

Weighing 200 tonnes, the new bridges were transported to the site and jacked down into position and installed.

Each of the transport moves were carried out using 24 axle lines of SPMT in a 2 x 4 file 6 configuration, with the bridges supported using ALE trestles. Multiple items of street furniture were removed to facilitate the transport, which required the co-ordination of numerous parties, including multiple energy companies and two local councils.

ALE was given just 52 hours to complete each replacement over consecutive weekends, to minimise disruption to traffic.

The bridge replacements required ALE to first remove the old bridges, weighing 55 tonnes, and then install the new ones, which weighed 200 tonnes.