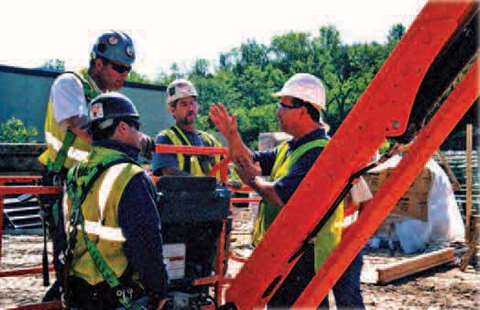 Two ANSI standards regarding the proper use of aerial work platforms became effective in August – A92.3 for manually propelled machines and A92.5 for boomsupported aerial lifts – and notice of these revised standards were distributed throughout the industry. These are our standards, created by stakeholders of our industry and designed to help make our workplace safer.

What has changed in the standards?

How has the industry changed to meet the standards?

My first response is to the question of what has changed in the standard. This can be a lengthy answer as there were significant changes. However, I think the response can be distilled into two basic themes, training and maintenance.

The issue of training may have previously been confusing to some due to the terminology and title “Training on Delivery” that was used in the A92.5–1992 standard. Many in the industry renting lifts would inform their rental customers that they needed to be present on delivery to receive training. Today's standard has added specific definitions and language to separate information provided at point of delivery from training.

Familiarization is a term first appearing in the A92.6–1999 standard defined as “providing information regarding the control functions and safety devices for the aerial platform to a qualified person or operator who controls the movement of the aerial platform.” By definition alone, this cannot be training, as the information is being given to a qualified person or operator. To possess the title of “qualified” or “operator,” the individual must be already trained.

In the new standards, however, training is defined as “instructions to enable the trainee to become a qualified person regarding the task to be performed (operate the aerial platform in this case) including knowledge regarding potential hazards.” All parties in the standard – dealers, owners, users, and operators – now have new language to describe their responsibilities regarding both familiarization and training. While the intent of the 1992 standard is the same as the 2006 standard, the language today better ensures the distinction between familiarization on delivery and operator training. This is a significant update as the industry has much ground to make up in this area.

This issue of maintenance has also received some noteworthy changes in the standard. There are added definitions and language to expand the focus on the task. However, the requirement to maintain, inspect and repair “in accordance with manufacturers’ manuals and instructions” change the rules from “just go make that thing run” to “assure that it complies with manufacturer's specifications.” The ability to just have anyone who can turn a wrench service aerial lifts is clearly controlled by their knowledge of the manufacturers’ manuals and instructions.

It is worth noting that anyone who owns an aerial platform (contractor, manufacturer, other businesses, etc.) has the same requirement to maintain, hold pre–delivery inspections when allowing others to use, carry out frequent and annual inspection defined by the manufacturer, and provide training, familiarization, record keeping and more.

New language for dealers under the title of training requires them to offer training to owners, users and operators to comply with the requirements of the standard regarding inspection, maintenance, use, application, and operation of the aerial platform.

That means training includes every one of those areas to ensure the safe use of the equipment. An important word in that sentence is offer. It is the responsibility of anyone who directs or authorizes an employee to operate an aerial platform (loading, unloading, inspecting or any form of use) to ensure they have been trained, familiarized, and aware of their responsibilities of operation as outlined in the standard.

There are other changes in the standard beyond those defined in this article. Two more changes are the requirement to have the ANSI standard supplied on every unit and the extension of recordmanuals retention from three to four years. You will need to read the standard in its entirety.

As I said at the start, there is aspecificasecond response to the question of what changes the industry to what's changed, in regardsmade to comply with the new standard. My response will be very subjective. Adding to my 30–plus years in the rental industry, I have immersed myself over the last months in the regulations and training needs for aerial platforms. During this time, I have had conversations with manufacturers, small to large rental companies, associations, unions, contractors, and operators. The simple fact that I have had so many discussions on this topic is a positive sign that the industry recognizes the need to comply with our standards.

The stark truth is that most perceive that someone in the chain of responsibility is failing to deliver. The most notable failure is the lack of operator training. The reality of increased pressure on improved productivity on all parties has opened the door too widely on compromising our responsibilities. It would be a stretch to imagine that even 50 percent of all operators on aerials last year received operator training as defined by ANSI.

The number of times a week that familiarization is either inadequately or not given at all is staggering. The number of pictures that I have seen that show operator error is countless. The ongoing reports of serious injuries and fatalities continues to plague the industry, not to add the even greater number of small incidents and near misses. Can we really afford not to change?