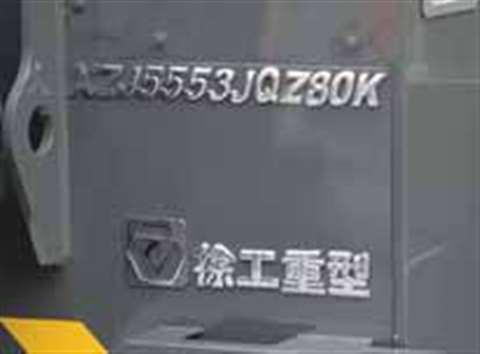 It is a Chinese government requirement that all product types are registered. Product designations or model numbers are sometimes long

Much of the talk around the BICES and ConExpo Asia exhibitions in October and December 2007 was stories of massive growth at the Chinese manufacturers.

Figures from the CCMA (China Construction Machinery Manufacturers' Association) make interesting reading. The mobile crane branch is one of 29 in the CCMA. Its 54 members include manufacturers of wheeled mobile, crawler and truck mounted cranes, plus ancillary suppliers and institutions.

Truck cranes are more than 80% of mobile crane demand, according to CCMA. While there are 12 manufacturers of mobile cranes in China, a group of four have more than 80% market share, led by XCMG with more than 50%. Next are Zoomlion with around 19%, Sichuan Changjiang (50% owned by Terex) with about 11%, and Taian Dongyue at 8%.

Four manufacturers also dominate the crawler sector, according to CCMA. Between January and August 2007 Fushun Excavator had more than 40% market share, followed by Sany with 25%, XCMG with 24% and Zoomlion with about 8%, according to CCMA. For other figures on the market see the IC December 2007 report on the BICES exhibition.

Fushun Excavator Corporation's recent financial performance is an example of the astonishing growth at Chinese manufacturers. Turnover in 2007 was RMB 1 billion ($ 138 million), up by nearly 100% from RMB 550 million ($ 330 million) in 2006.

It is a similar story at Zoomlion: “In the first three seasons this year, both the business income and profit of the company have increased by over 100% year-on-year, and it is estimated that the net profit in 2007 will rise by 100 to 150% from last year,” says Zhang Jianguo, Zoomlion senior president. Turnover of RMB 2.4 billion ($ 330 million) was generated by Zoomlion's crane sector in the first three quarters of 2007, close to half of the group's turnover of RMB 6 billion ($ 826 million) in the same period.

“In 2006, the company ranked 24th among the top 50 engineering machinery manufacturers in the world, rising by nine places from the ranking in 2005,” says Chen Peiliang, assistant to president of Zoomlion and general manager of Zoomlion International Trade Co., Ltd. Zoomlion is endeavouring to be in the top 10 of engineering machinery manufacturers in the world in five to ten years.

As a former technical research institute, technology is a particular strength of Zoomlion. “Chinese technicians are clever,” says Jimmy Pan, vice general manager, “we can provide technology similar to Westerners. We have lower labour costs and we can maintain this.”

In addition to strong growth in domestic market sales, exports are also taking off. Over the whole sector of Chinese construction equipment manufacturers it is estimated that between 3 and 5% of equipment is exported. Dealers and distributors are being appointed around the world, most notably in the US, Europe and the Middle East.

At Fushun Excavator the contribution from exports increased from US$30 million in 2006 to $70 million in 2007, while the company forecasts $100 million for 2008. Fushun exported about 100 units in 2007 and destinations, in addition to India and the Middle East, include Europe and the US.

At Zoomlion revenue from outside China is already 15% of total sales and, by the end of 2010, the company forecasts that this will be 40%. Zoomlion's best export markets are the BRIC countries (Brazil, Russia, India and China) and the Gulf countries in the Middle East. Western Europe, the US and Australia are the next focus. In October a Zoomlion tower crane was delivered to Belgium and there is also a truck crane in Europe and the range of truck cranes is undergoing CE certification.

Zoomlion has made good progress in Australia and there are already some truck and crawler cranes in the US. Significant additions will follow there with the recent appointment of Lewis Equipment as a distributor (see News). South East Asia is a tough market to export to, Jimmy Pan says, due to the large number of used machines available there.

There is even a truck mounted Zoomlion crane at the South Pole, being used to build China's station there.

Among the truck cranes on show at ConExpo Asia was the new 50 tonne capacity Sany QY50C on four axles. The chassis is built in-house using a Euro 3 engine giving a claimed fuel consumption of 50 litres per 100 km. It is aimed at all world markets. The 43 m main boom uses steel from Sweden and, with the jib, maximum tip height is 58 m. Wen Wei, Sany international sales manager, said the company is looking for distributors all over the world for its mobile truck and crawler crane products.

Continuing the export theme, XCMG says it has CE certification for six of its truck crane models between 25 and 130 tonnes capacity. Dealers for Belgium and Poland, Michielsens and Hortpak Construction Company, respectively, have each ordered 20 units, Toni Peng, XCMG sales manager, told IC. The machines will be for sale and rent and each company offers spare parts and service backup.

Some XCMG all terrain cranes have CE certification, including the 200 tonne capacity QAY200, and the company is working on others. It means that the cranes can be sold in Europe but it is also intended as a wider standard indicator or reference point for the level of quality and standard of design, manufacture and quality control.

Fushun Excavator Corporation, China's largest manufacturer of crawler cranes, built 450 units in 2007, Zhou Zhi Bin, deputy general manager, told IC. That total equates to about 40% of the Chinese market or close to 15% of the annual world total of somewhere between about 2,300 and 3,000 units. It puts Fushun, which only makes crawler cranes, in the world top three by number of units.

Exports of XCMG crawler cranes are also starting, Toni Peng at XCMG told IC. Things are also moving at Zoomlion. Following the launch of the 600 tonne capacity QUY600 crawler at the Bauma China exhibition in Shanghai in November 2006, three units have been sold in the domestic market and one unit has been confirmed for delivery to a customer in India in 2008.

Most, if not all, the crawler manufacturers have plans to offer higher capacity models. Fushun Excavator will increase its 16 model range by adding its first 500 tonne capacity crawler in March 2008. Sany announced it will build a 900 tonne capacity model and that there are plans to go above 1,600 tonnes capacity (see the Sany crawler crane development news story, 23 October 2007, on www.khl. com). The specification brochure for the SCC9000 is already available.

Developments in the tower crane sector saw several new models on show at the ConExpo Asia exhibition in December 2007. Zoomlion and GJJ both showed new flat top models. Tower cranes is one of the top three product sectors where Zoomlion forecasts expansion.

GJJ's new QP5013 flat top at the show was the first unit built. GJJ's other tower crane on show, the hammer head type JT7030, was also a new model. Tower cranes are a relatively new product for GJJ, which says it builds about 80 units a year.

Tower cranes are also a new product for Jarlway, previously known for its concrete pumps. It has been building tower cranes for a year and offers 11 models, all of which have been built, William Ho, tower crane chief, told IC.

Two primary factors prompted Jarlway's diversification into tower cranes, Ho, explains. First was the strong demand in China, especially for mid-size (100 to 300 tonne-metres) and large tower cranes upwards of 300 tonne-metres. Second was the potential of the international market. India, South Asia, South America and the Middle East are primary target markets and units have already been delivered there. A total of 50 units have been built and 90% of those were exported.

“Jarlway is a top quality brand in China,” Ho says, “the quality level is good.” The next step is to get CE certification and a European distributor is being sought. First in line for CE are likely to be the smallest and the largest models in the range, the JT7030 and flat top JTT100, respectively.

Jarlway's plans are to tackle the US market by around 2010 and the range will be extended with larger models and, possibly, self erecting towers, Ho says.