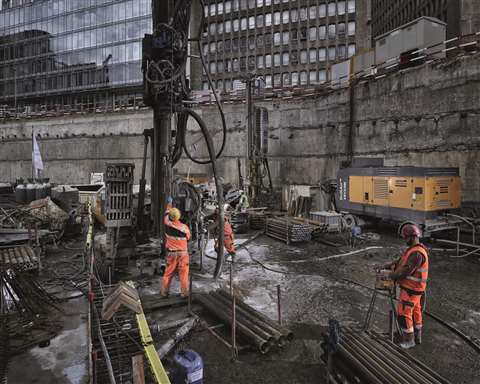 The use of drilling equipment is needed for projects of all sizes, including those on a grand scale, such as the work which is currently occurring in Thailand’s capital.

The second most visited city in the world, Bangkok, is to welcome a new ‘city within a city’ when ‘One Bangkok’ is constructed. The new development is set to provide a total floor area of 1.83 million m², making it the largest private sector property development initiative ever undertaken in Thailand.

Due to be completed in 2025, Thai Bauer, the local subsidiary of Bauer Spezialtiefbau, was commissioned by developers Frasers Property and TCC Assets for the foundation works for the buildings and execution of the diaphragm wall.

“In order to minimise the impact of the construction activity on nearby road traffic, concrete batching plants have been set up on the construction site itself. This allows us to continue working irrespective of traffic flow,” said Mike Sinkinson, managing director of Thai Bauer.

The specialist foundation engineering works began in March 2018 and are expected to be completed by April 2019.

As in any job, picking the right tools is essential – something that is very important regarding drilling. For example, when drilling several thousand holes into concrete for dowels  a one- or two-gang concrete drill is the most efficient alternative to handheld drills. However, for contractors a three, four or five-gang unit can be the best solution, such as during the construction of Maasvlakte 2, one of the Port of Rotterdam’s most recent harbor additions. 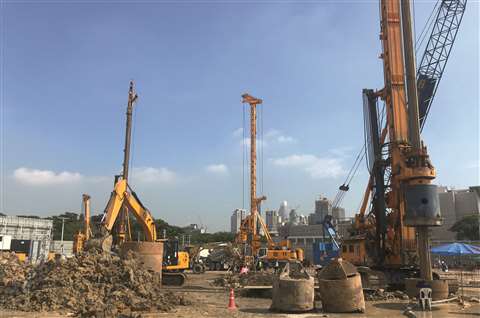 One Bangkok is scheduled to be completed by 2025

For the project’s 11km seawall, a portion of the North Sea was reclaimed. Contractors extracted more than 238 million m3 of sand and dredged the seabed to make room for the seawall and shipping traffic. They protected the harbor and beach from tidal waves by building two new seawalls – one hard, one soft – with the highest seawall 14m, above sea level.

“We needed to drill a massive number of holes,” said Karel Van de Moosdijk, owner of Bemo Betonboor & Zaagtechniek, a concrete drilling and sawing company in the Netherlands.

Bemo developed the massive concrete infrastructure to support the new harbor, which needed roads, railway lines, bicycle paths, utility infrastructure, and wharfs for loading and unloading containers. To stay on task, the company had to drill 800 to 1,000 holes per day over the course of the three-year project.

The solution was a diverse fleet of three and five-gang slab rider drills that allowed operators to drill multiple holes at a time. In addition, the units’ alignment systems were critical in keeping the contractor on pace. The systems allowed operators to quickly reposition the drills.

When Bemo’s portion of the project was completed, operators had drilled 180,000 holes, a feat that only could have been economically accomplished within the timeframe using multi-gang drills.

Drilling jobs pose different challenges when underwater, and in Germany two new tide gauges had to be installed along the river Elbe, the fourth largest river in central Europe. Hamburg Waterways and Shipping Office (WSA) arranged for new measuring stations containing state-of-the-art technology to be installed alongside the existing reference levels. 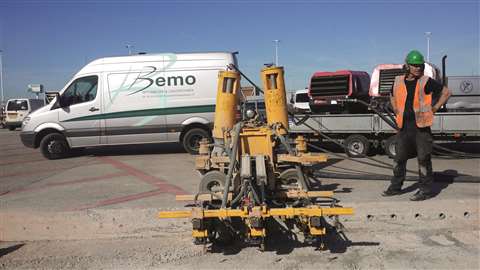 E-Z drill products were used on the construction of Maasvlakte 2, one of the Port of Rotterdam’s recent harbor additions

Since the land connection could not be made using the open-trench construction method in this sensitive and partially protected area, the WSA issued a tender for the project that specified the application of a trenchless installation method. The Damendorf-based company Paasch Rohrleitungsbau was awarded the contract for the horizontal directional drilling (HDD) project and the company used a Grundodrill 15N for the job.

The actual task for Paasch was the installation of two cable protection pipes, each from the beach to the foundations of the tide gauges at the bottom of the riverbed under water, at Grauerort over 234m and at Krautsand over 180m in length. The job was completed successfully and on schedule.

Another project which required lateral thinking occurred in Mongolia, Asia. Atlas Copco was approached by a state-owned drilling contractor to support a test project at a residential site in Inner Mongolia. As the drilling would be conducted in an urban area, the project co-ordinator demanded the compressor being used would provide low noise and carbon emissions, thus a diesel-driven compressor was ruled out. Consequently, Atlas Copco adapted its XRYS 1050 35 bar drilling compressor with a 315kW electric motor. The compressor is to be integrated into a drill rig and will be powered via connection to a local Power Station.

As the contractor is seeking to conduct drilling at depths in excess of 800m, the use of a 35 bar compressor represented the only viable option. Until recently, the accepted norm for operating pressure had settled at 25 bar, which is acceptable for water well drilling where average wells are between 100 and 150m in depth and most jobs can be completed in a single day.

For companies seeking faster drilling techniques, the use of 35 bar compressors is emerging as a powerful solution. For geothermal drilling to a depth of 250m or more, a pressure level of 35 bar is best suited to the task, with drilling 500m in a single day achievable. 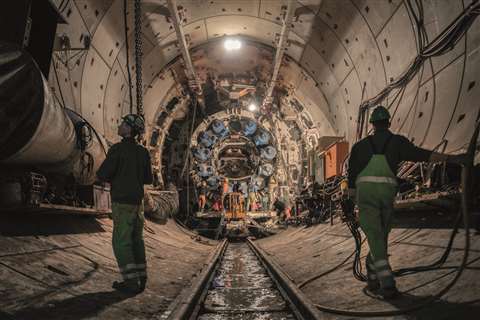 The Herrenknecht tunnel boring machine Stuttgart-Ulm schneller erreicht (SUSE) recently finished excavating the western tube of the Filder Tunnel, in Germany, for a railway project. The 120m long 2,000 tonne Multi-mode TBM was then disassembled into individual parts and turned around underground in a specially built cavern inside the rock mass before it commenced excavation work in the remaining 3.4km section of the eastern tube.

“Such an about-turn underground with a TBM of this size is absolutely exceptional,” said Dr Martin Herrenknecht. “This shows what extraordinary technical feats are being achieved during the construction work on the Filder Tunnel.”

Due to the complex project requirements, initially no mechanised tunnelling was planned for the prject. However, the flexible TBM machine convinced the client Deutsche Bahn of the advantages of mechanised tunnelling. The only area the machine was not used was in the geological transition zone, where miners removed the material from the rock using diggers and loosening blasting.

Available only within the StructureScan Mini XT user interface, the drill hole indicator is designed for concrete coring applications. In complicated slab situations, the drill hole feature can help users determine the safest location for coring concrete.The company made clear that the feature is not a substitute for careful analysis by a trained operator and operators should receive special training prior to using this new aid.

A different aid has been launched by Japan-based Koden Electronics. The DM-604 drilling monitor uses ultrasound to show the condition of holes before piling and whether the hole is straight. The condition of the hole can be seen by four checking points, and one measurement takes 15 minutes.

Elsewhere, Vermeer has launched a new horizontal directional drill, the D40x55DR S3 Navigator, for a broad range of ground conditions. The new rock drill features Vermeer dual rod technology that uses an inner rod to provide torque to the drill, while the outer rod offers steering capability and rotation torque for reaming. The combination is said by the company to provide powerful downhole cutting action and the flexibility to select the appropriate tooling to best match the ground conditions.

“Dual rod drilling rigs are much easier to use than other rock drilling solutions and provide more versatility when a contractor is drilling soil conditions that vary significantly throughout the bore path,” said Tod Michael, product manager of trenchless products at Vermeer.

Another new product launch is the RH560 DTH hammer from Sandvik. The drill is said by the company to have an enhanced air cycle and piston design to deliver higher striking power, while fewer internal parts reduces failures and downtime.

With many contractors working in the mining industry wanting to reduce their costs and increase productivity by using premium hammers without a foot valve, as some consider it to be less reliable, the RH560 is positioned for those wanting hammers without foot valve design.

In tests in varying rock condition, the new design has been proven to deliver up to a 15% increase in penetration rate, with smoother collaring and straighter blastholes. Higher power output comes from lower air consumption. The hammer improves reliability and economy through optimised air consumption.

At the Hillhead show in England, Epiroc launched what was said to be a first in hydraulic breaker technology. All of the company’s heavy (HB) hydraulic breakers now feature the patented Intelligent Protection System (IPS). Combining Epiroc’s AutoControl and StartSelect functions, this fully automated system is said to provide simpler and more economical operation.

AutoControl optimises breaker performance by automatically adjusting the piston stroke length, while the StartSelect system offers manual switching between two modes: the AutoStart mode enables easy positioning at the beginning of the breaking cycle, and in the AutoStop mode the breaker stops automatically to avoid blank firing at the end of the breaking cycle. Epiroc now takes these features to a higher level across the HB range for 22 to 140 tonne carriers.

Now the functions are combined in IPS which ensures that the hydraulic breaker always starts in the AutoStart mode. When the contact pressure between chisel and material increases and AutoControl switches from a short piston stroke to a long piston stroke, IPS switches automatically to the AutoStop mode. When the chisel breaks through the material the breaker automatically shuts off. 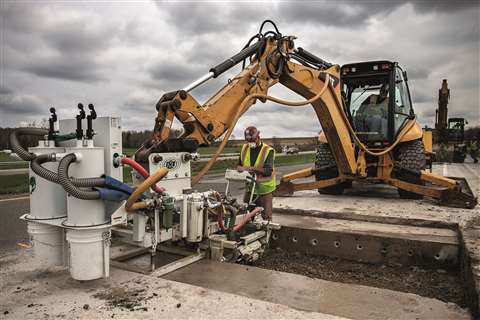 Javier Guerrero, international sales representative for Minnich, on the latest in this sector.

at once and drive down the slab to drill the next set of holes – all while standing in the grade away from the equipment. From this vantage point, operators can drill faster and more accurately on airport and highway jobs while reducing exposure to dust, debris, noise and obstacles.

Dust control is a growing need as contractors continue to strive to increase operator safety, meet project requirements, and comply with regulations. The pneumatic Minnich dust collection system for dowel pin drills features Venturi-style suction and manual or automatic purge control, helping remove dust from the air as the operator drills. The canister-style unit can be retrofitted to any Minnich on-grade, on-slab, machine-mounted or utility drill model. It can also be adapted to fit other dowel pin drill makes and models.