“A direct electric drive is an electric motor that generates rotational motion at various speeds and torques using electrical energy,” explains Jordan Cuadrado, LGMG North America’s product manager. “There are two types of direct drive mechanisms: AC and DC motors. Not getting deep into the specifics; LGMG primarily uses DC motors on our scissors. Our direct current (DC) motor utilizes the electric energy from the battery and converts that energy into mechanical motion by the means of a voltage and rotates the motor in one direction or another.”

“Electric motors are generally more efficient means of driving a unit than a hydraulic motor due to the mechanical losses found in a high-pressure hydraulic system,” Schnarre explains. “This can mean either longer operation between charges, or reduction in the overall battery capacity required, reducing battery costs.”

Regarding maintenance, Schnarre says, the “use of electric traction motors allows for simpler hydraulic systems, meaning reduced number of components and reduced maintenance. This also means that machines are less prone to hydraulic leaks and/or failure, beneficial for lifts that are often operated indoors or in commercial spaces where a hydraulic fluid spill would be especially problematic.”

“Not to mention comfortability of proportional drive performance of an electric motor oppose to that of the “bang-bang” (open and close) hydraulic drive systems are known for,” Cuadrado adds. “Electrics may cost more initially, but the increase in efficiency, reduction in maintenance and proportional controls it tends to outweigh hydraulic systems.” 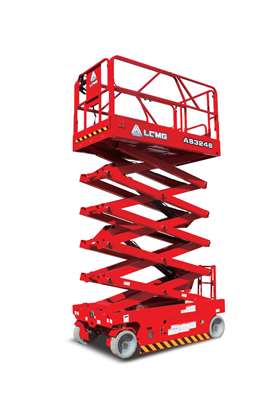 LGMG North America says for scissor lifts, the movement toward electric-motor-driven or e-drive units is well under way and in some cases e-drive units are outselling their hydraulically driven counter parts.

“There is a demand for ever-higher levels of efficiency in lifts,” says Schnarre. “As such, manufacturers are looking to more advanced, higher efficiency motor technologies for both traction and hydraulic pump applications.”

Schnarre explains that initially, e-drive lifts were driven by brushed DC motors, which are common in several traction applications (such as golf) and require relatively simple motor controllers.

“As demand has grown for higher efficiency and lower maintenance lift systems, OEMs are turning to low voltage, 3 phase AC induction (LVAC) and even brushless permanent magnet (BPM) motors for traction applications,” Schnarre says. “These motor types feature higher power density and significantly improved efficiency compared to brushed DC motors. These motors also feature reduced maintenance since there are no brushes or wear parts that need to be serviced regularly.”

This trend toward higher efficiency motors is not limited to just traction motors, as lift manufacturers are also looking at LVAC and BPM motor solutions to improve efficiency of the hydraulic pumps and further extend battery life in electric lifts.

Hy-Brid Lifts has been using electric drives on its products for many years. The combination of electric drive to the wheels with hydraulic lift for the scissors is where the name “Hy-Brid” originally came from, the company tells ALH. 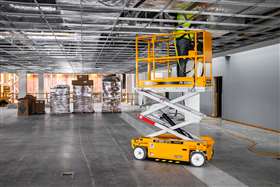 “We are the experts in this arena, and our time-tested designs and experience allow us to build the most robust scissor lifts in this segment,” says Ben Froland, vice president of engineering for Hy-Brid Lifts. “Hy-Brid Lifts completely eliminate the hydraulic components in the drive system, and instead use electric motors with planetary gearboxes mounted directly to the drive wheels. We also eliminate the hydraulic steering and instead use an electric linear actuator.”

According to Froland, electric drive, working in conjunction with an electric steer actuator, increases efficiency by up to 40 percent over hydraulic powered steer and drive systems.

“Because of this, Hy-Brid lifts using two 12-volt batteries can last just as long, if not longer, than units running four 6-volt batteries,” Forland says. “This means lower charging power consumption (more units can be plugged into the same source), lower replacement cost (two batteries versus four), fewer batteries to maintain and fill with water, and an overall lighter machine.”

Hy-Brid’s motor controller is paired with high-torque electric drives, which Froland says have a substantially higher torque output than electric motors previously used in the marketplace, allowing units to easily climb ramps, trailer, parking structures and other obstacles many face in the equipment rental industry.

All of Hy-Brid Lifts’ self-propelled units use a two-step planetary reduction gear box designed and manufactured specifically for the company by Auburn Gear.

“The planetary gear design is superior to spur gears for high-torque applications, because it shares the load over several gears with greater meshing tooth surface area,” Froland says. “This ensures maximum durability so the motors will operate quietly for a very long time.”

There are currently four main motor types that can be found in a traction drive on a piece of access equipment. Please see the below graphic for a breakdown. 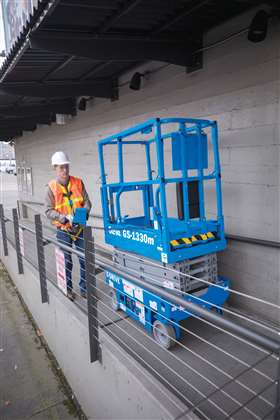 Genie’s recently debuted GS-4655 scissor lift is equipped with a front wheel AC electric drive system. The GS-4655 is Genie’s largest slab scissor; it features a working height of 52 feet. On the smaller end of the spectrum, the company’s GS-1330m, with a platform height of 12.8 feet, also utilizes electric drive systems.

“Electric drive systems can offer some benefits to the jobsite, such as longer runtime due to higher efficiency, as well as increased proportionality enabling precise control and maneuverability, when navigating congested jobsites or in jobsites with restricted access,” explains Mike Flanagan, Genie product manager, Terex AWP. “Increasingly, applications are looking for ways to mitigate hydraulic leaks, and incorporating electric drive enables manufacturers to reduce the total hydraulic fluid required in the scissor.”

Flanagan says for rental companies, AC electric drive systems, like those found on the Genie GS-4655 model, offer a low total cost of ownership (TCO) solution to help improve rental return on invested capital (rROIC), due to the fully sealed and maintenance-free design that eliminates the challenges associated with water or dust ingress on the jobsite.

“There are many different variables that can impact slab scissor lift performance and cycles, for example the machine configuration, front wheel or rear wheel drive, machine weight and battery size,” Flanagan says. “For rental applications, runtime is not always the most important spec; performance, such as ramp climbing and robust design, as well as resistance to extreme jobsite conditions must be considered when evaluating electric drive systems.”

For larger boom lifts, the trend is shifting toward diesel/electric hybrid units with electric traction motors. The three key drivers for hybrid systems in boom lifts are: flexibility, fuel efficiency and costs.

Hybrid units can be used both inside and out by utilizing electric-only operation or diesel power. Using a diesel/electric hybrid system generally allows the diesel engine to be reduced in size, sometimes reducing engine output by 50 percent. Couple those with the costs in association with diesel engines that meet more stringent emissions.

“As tougher emissions standards have gone into effect in the U.S. and Europe, the cost of the diesel engines has risen significantly due to additional equipment required such as after treatments and catalytic converters,” says Schnarre. “Lift manufacturers are turning to electric hybrid systems that allow the use of a lower output, lower cost diesel engine.”

“With two modes of operation (all-electric or hybrid), the Genie Z-45 FE boom offers rental companies a versatile, sustainable and powerful ‘2-in1’ solution adapted to indoor, as well as outdoor, applications, even where on-site electric power is not available,” says Marie Engstrom, Genie product manager, Terex AWP. “And with its robust lift capacity, operators can take up 30 percent more materials in the platform for increased productivity as compared to other hybrid machines in this height range. These features translate to additional jobsite utilization and longer rental opportunities.” 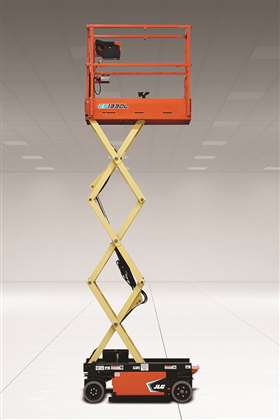 The company’s new ES1330L is a lightweight, 1,984-pound, electric drive scissor. The unit has a narrow 30-inch width combined and a 13-foot platform height make it well-suited for use in confined areas and on suspended floors with weight limitations, such as those found in data centers, hotels and museums.

The ES1932 is modeled after JLG’s R1932 model with the only differentiating feature of electric drive, which has long made JLG ES-series scissor lifts best-in-class and the industry’s benchmark.

Both the ES1932i and ES1530L, while not on display at the show, also join the JLG compact, electric drive scissor line.

All new ES series scissors have only six hoses, a significant reduction over hydraulic drive machines, which reduces the chance for leaks and minimizes service calls. Customers will benefit from the commonality between the R and ES-series line for simplified servicing and parts stocking.

JLG also showcased its first all-electric scissor lift this year at ConExpo. The AE1932 is the first lift in a new category of all-electric lifts for JLG called the Davinci series, a nod to the famous inventor who reasoned that by fully understanding how each part in a machine worked, it could be modified and combined in different ways to advance technology. The AE1932 is powered with a single lithium-ion battery with no compromise to performance.

“JLG electric drive scissors have long been accepted as the benchmark in the industry when it comes to performance,” says Nunez. “When customers asked us to reduce their maintenance costs and to help them minimize leaks, we wanted to be progressive and set a new benchmark, so we developed a scissor that didn’t just contain leaks but one that eliminated them altogether.”

“The technology that we’ve developed is robust and timely as it relates to the change we are seeing in consumer behavior and an increasingly stringent regulatory environment. When applied to the AE1932, this new technology allows us to deliver a scissor solution with exceptional productivity and minimal maintenance,” says Shashank Bhatia, director of engineering, MEWPs, JLG.

The 19-foot platform height, 32-inch wide AE1932 scissor provides a class-leading platform capacity of 600 pounds both indoors and outdoors, a 20 percent improvement from typical scissors and is compliant to A92.20 standards. The machine travels 2x faster than a standard scissor lift and charges 3.5x faster, delivering unmatched uptime and flexibility on the jobsite. Each wheel is controlled independently for reduced tire wear and limits damage to sensitive flooring.

Its single lithium-ion battery is backed by a class-leading warranty and is expected to last 120-plus months, so owners should never have to replace a battery during the machine’s lifespan. This will be the first unit in the industry to recover energy while the platform is being lowered which contributes to a 70 percent decrease in power consumption with longer life on a charge than a standard scissor. Optimized components and fewer serviceable parts further reduce service requirements.

“The Davinci AE1932 is an intelligent machine that conducts self-diagnostics and allows operators to test all systems on their mobile device. This eliminates the more traditional hand-held analyzer,” says Nunez. “Having the ability to proactively keep track of a machine’s health improves the total cost of ownership, an equation JLG is committed to improving.”