Construction sites are inherently dangerous places, and dumpers are part of the problem. Taking as an example the UK, which is one of the most mature rental markets in the world, statistics from the Health and Safety Executive (HSE) show that between June 2016 and July 2017, site dumpers alone were responsible for eight deaths and 127 personal injury claims.

For this reason, safety is a central concern in the design of dumpers and it is driving a trend for more cabbed machines. 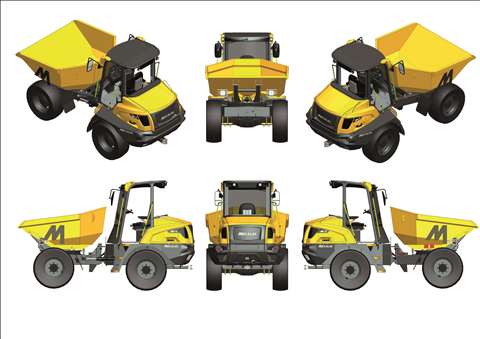 France-based Mecalac is among those manufacturers putting a greater emphasis on cabbed dumpers. The company launched a range of cabbed models in 2017. This was closely followed by its next-generation Shield safety packs, including features such as seatbelt warnings, a speed limiter and stop/start control, which are now included as standard on all Mecalac roll-over protection structures (ROPS).

This year, Mecalac is introducing its fixed-canopy site dumper, which aims to bridge the gap between ROPS and cabbed models.

Based on the company’s MDX cabbed dumper, the new model removes the rear and sides of the cab to leave a windscreen and roof as an open-air canopy. While offering high levels of protection in the event of the machine rolling over, the design provides the operator with good visibility around the machine.

It is initially available on the 6 and 9 tonne payload models, which are both driven by a 55kW Perkins 854 IIIB-compliant engine with DPF (diesel particulate filter). They also have Mecalac’s next-generation Power Brakes, driven by the main hydraulic system.

The fixed canopy models can be fitted with Mecalac’s Shield technology packs.

Another new model from Mecalac is the TA3SH power swivel dumper. At just over 3.9m in length and 4.4m in width, it is designed to be a versatile machine for use on small to medium jobsites – as is the case with the whole TA3 range, to which the model belongs.

Peter Bigwood, General Manager of Mecalac North America, said, “We are constantly looking for gaps in the marketplace and innovating products to meet those needs. These site dumpers deliver outstanding power and performance with the flexibility to operate in challenging areas.”

The dumper’s load can be rotated 90° in each direction before being tipped, reducing the need to manoeuvre the dumper, improving both productivity and safety.

The TA3SH’s payload capacity is 3 tonnes, putting it towards the lower end of Mecalac’s range of power swivel models, which have capacities of between 0.9 and 9 tonnes. 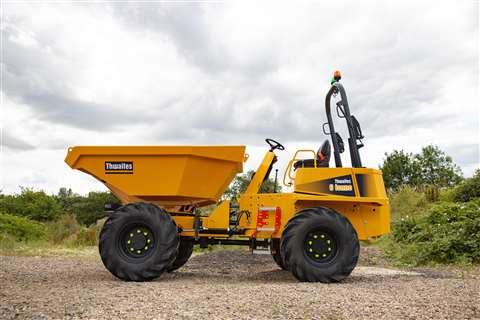 Thwaites’ 6-tonne power swivel dumper is among the models to benefit from new safety features, including high-visibility steps

While the new Level 2 ROPS and FOPS (falling object protective structure) cab protects the operator, an integrated camera system also helps to protect on-site personnel around the dumper. Compliant with ISO 5006 and waterproof to IP67 rating, the camera system provides the operator with 360° visibility.

Thwaites Engineering Manager Bob McElvogue said, “The inclusion of these critical safety features will significantly reduce the risk of site incidents, accidents or near misses. Having listened carefully to our customers, it was important that due consideration was applied to operator ergonomics.”

The side and rear glass panes are tinted to reduce solar heating inside the cab, and the ‘pop-out’ glazing system makes it easy to replace damaged windows.

New safety features have also been added to Thwaites’ 6 and 9 tonne dumpers. These include a spring-activated hydraulic release handbrake, which automatically engages in the event of an engine stop, and improved LED road lighting housed in the mud guard. The machines are powered by Stage V engines.

Wacker Neuson’s product manager for dumpers, Stefan Kurzmann, has highlighted the importance not only of safety but also operator comfort in driving the demand for cabs on dumpers. 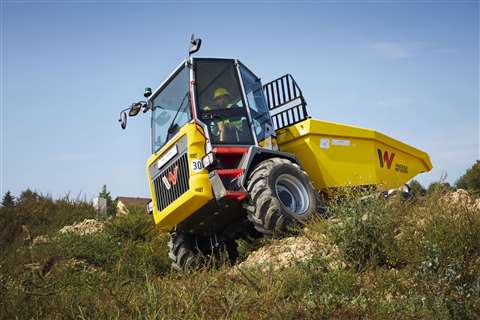 “The demand for cabbed dumpers is increasing in Europe, not only in the UK. At the moment, Germany shows growing interest.

“The main reason is the increased safety for the operator. Furthermore, comfort also plays a role that should not be underestimated, as construction companies sometimes have difficulty recruiting and retaining employees. Providing a dumper with a cab and air conditioning helps to make work easier for the operator.”

Wacker Neuson also offers a good example of another trend in the sector: reversible driving systems.

The company’s Dual View dumper, which is available in payload capacities of between 6 and 10 tonnes, has an operator control panel and seat console that can swivel 180° to face the opposite direction. In this way, the operator is given a clear view of their direction of travel without having to twist their body awkwardly. This can be of particular benefit on confined jobsites and it allows the dumper to be driven without a full bucket load compromising visibility ahead.

In order to keep the environment around the skip in view, a rear-view camera can be installed as an optional extra on the three Dual View models: the DV60, DV90 and DV100. There is also the option to have a front-view camera installed.

In addition to the canopy version or fold-down ROPS, the Dual View models are also available with a cabin. A sturdy protective grating on the skip protects the operator and cabin from falling material and from slewing excavator buckets.

Spanish manufacturer Ausa also offers a dumper with a reversible driving position, which was launched at Bauma 2019.

The DR1001AHG is a 10 tonne capacity, all-terrain vehicle with a closed ROPS/FOPS cab that can rotate 180° to give the operator a better view in the direction of travel, helping to improve on-site safety.

The dumper, which has a hydrostatic transmission, is also equipped with a front camera, a seatbelt buckle sensor and a reversing alarm.

The DR1001AHG uses the same electronic components as the company’s D601AHG, including ECO Mode, Smart Stop, Hill Holder, and a digital screen integrated with the dumper’s telematics systems.

Although the focus for this model will be the European market, it will also be available outside of Europe.

As with much compact construction equipment, the dumper sector is exploring the possibility of electrification.

This is illustrated by Ausa’s first prototype electric dumper, the D100AHA Electric, which was originally unveiled at Intermat 2018, with new features showcased at Bauma 2019.

The 1 tonne capacity D100AHA Electric dumper has an electric power unit that delivers 15kW and can last for a full working day. At the end of the day, it can be connected directly to a mains power supply for full charging in 4 to 8 hours, depending on the voltage.

A spokesperson from Ausa told IRN, “Rental companies and clients show interest in this type of machinery, however we will not see the majority of their fleet being electric until technology evolves enough to be able to offer lower prices.” 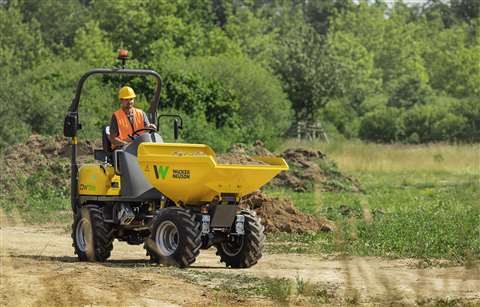 As one of the latest additions to the company’s zero emissions line-up, the DW15e has four-wheel drive and a payload of up to 1.3 tonnes. It is equipped with two independent electric motors – one for the drive system and the other for the work hydraulics – in order to better manage output demands and minimise energy consumption.

When the dumper is driving downhill, energy is recovered from the brakes to top-up the maintenance-free battery, which has an integrated charger that can be plugged into a conventional 230V socket.

Meanwhile, the DT10e electric tracked dumper has a payload capacity of 1 tonne and its compact dimensions make it suitable for indoor work since it can fit through standard doorways.

The dumper’s stability is enhanced by the fact that its batteries are fitted low down in the machine. 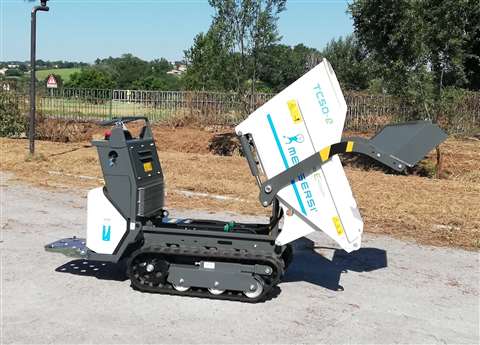 The new TC50-e tracked model measures 66cm in width and has a payload capacity of 500kg. Its 28-cell lithium-iron-phosphate battery, which can last for a full working day, powers a 5.5kW electric motor that drives the open-circuit hydraulic system.

Bruno Tarocco, Fleet Manager and Service Manager of CGT Edilizia, said, “Our decision to include some electric models in our fleet is part of our desire to feed the growing demand for electrification on site.”

The demand for electric equipment is being fuelled by emissions and noise restriction on construction sites.

Looking ahead, Tarocco said, “Over the coming year, we plan to add at least twenty more of Messersi’s diesel and electric dumpers to our fleet.”

Another recent development is that Messersi’s largest tracked dumper, the TC350d, is now available with a closed cab. 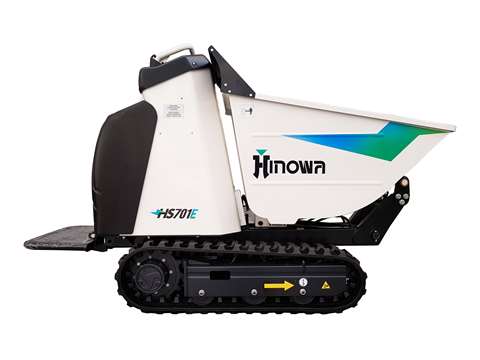 Hinowa, another Italian manufacturer, has also developed an electric tracked dumper. The company’s HS701 Lithium model is powered by a 48V lithium battery pack that can operate for a full working day on a single charge.

The battery has no memory effect, which means that it can be charged at any residual capacity without affecting the battery’s life. The charging time is 1.5 hours at 230V or 45 minutes at 380V.

One key feature of this dumper is the fact that the tracks are electrically powered, meaning that the electrical energy does not need to be translated into hydraulic energy first, which can waste 0.5kW of energy, according to Hinowa.

Another important feature is the fact that electric permanent magnet traction motors developed specifically for Hinowa are used in the tracks  instead of traditional hydraulic ones. This allows the tracks to run through bodies of water without  any electrical problems. 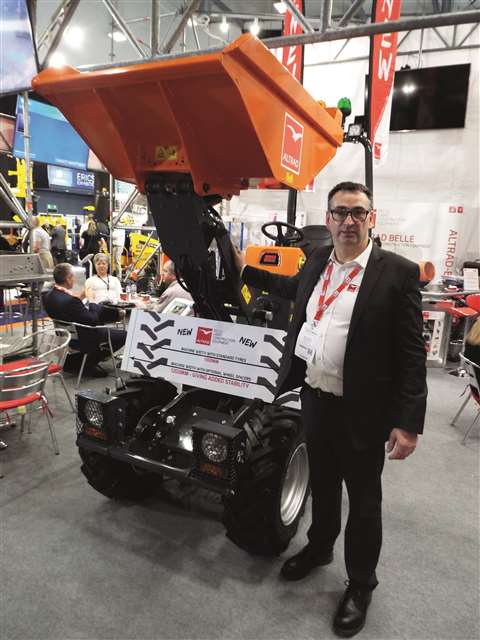 The model has been in production for nine months and Altrad Belle plans to roll 300 units off the line in its first year of production. The DX 1000 is only available in the UK at present, but will be launched on the European market in a couple of years, once production capacity has been ramped up.

Ray Neilson, Managing Director of Altrad Belle, told IRN that the model is now Speedy Hire’s standard dumper in this class, having won second place in the innovation award at the rental company’s conference last year.

How to improve sustainable practices in rental
Appleton Column: When it comes to sustainability in the equipment rental sector, Kevin Appleton says businesses should stop the virtue-signalling and look for meaningful actions