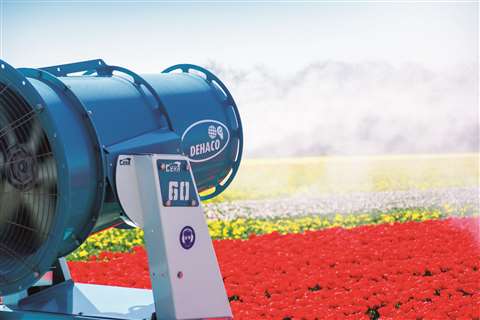 Dehaco has launched the Tera 60 GTM, which is described as an all-in-one solution for dust control. According to the company, it is not dependent on water or electricity supply, as the unit is equipped with a built-in generator and water tank. Moreover, the dust control unit features the possibility of being connected with a water supply in the field.

The Tera 60 GTM, which extends the existing Tera series, has been developed and designed using the in-house expertise of the Dehaco production team in co-operation with customers who are already active users of the Tera products.

Dehaco says that its introduction has broadened the range of possible applications, making it highly effective when preventing asbestos being released from burning buildings, preventing dust from spreading at recycling centres and controlling odour nuisance at waste treatment sites.

In addition, the unit is designed for preventing dust emissions during demolition, renovation and recycling operations.

Governments are applying stricter regulations on dust supression during demolition operations, so the use of dust control units is increasingly common. With these measures, governmental bodies aim to prevent residents and operating staff from contracting health issues.

The company believes that what distinguishes the Tera 60 GTM from its competition is the technology used to disperse the outgoing water flow. The rotating fan has been specially designed for the Tera series and fits perfectly with the cone, while the rotating spray head is designed with openings that distribute the water evenly when operating. The openings are designed so that lime and dust particles do not clog up. The unit also features the application of adjusting droplet sizes with a single push on a button.

The galvanised aluminium frame of the Tera 60 GTM is built for carrying a heavy load and features an integrated water tank placed on the underside of the unit and equipped with baffle plates. This makes sure the Tera is well balanced when on the move, as a result the towing vehicle experiences enhanced road holding. The top cover of the machine can be disassembled, making it always accessible.

EmiControls’ V22Orca is a hybrid dust suppression machine designed specifically for countries with colder climates. If, due to the cold temperatures, it is no longer possible to suppress dust using water mist, the V22Orca immediately makes snow. 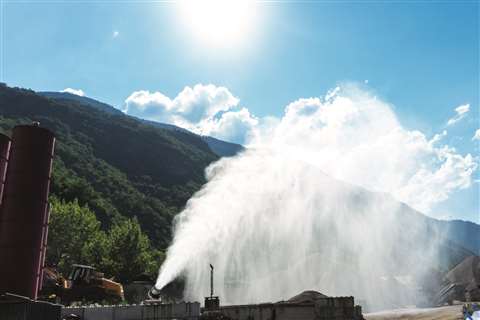 The V22Orca hybrid dust suppression machine from EmiControls, seen here in its summer guise, can also produce snow for dust control in winter

The company says its new machine guarantees effective dust suppression all year round, and ultimately, this hybrid solution may be defined as the “machine for extreme conditions”, as it suppresses dust up to a temperature of 50°C with water mist, while in winter it can operate down to -25°C with snow.

According to EmiControls, snow is particularly suited to suppression, as the dust particles bind with the snowflakes. As well as this feature, the V22Orca is equipped with an air compressor to generate snow, and depending on the atmospheric temperature and the humidity in the air, the machine automatically transitions from summer to winter mode.

After the huge success of the restyled V22 – EmiControls’ biggest dust controller – the silent V12s unit was the next in line to receive a new design.

The biggest difference is the size. The new V12s is much smaller, making it easier to transport and integrate into existing systems, yet the company says it retains the stability and robustness to operate in challenging conditions. The machine can be started and rotated much faster, and angles can be quickly adjusted and there are three different water consumption speeds available.

The water pressure is now higher too, which makes it possible to create an even finer water mist to abate the dust more efferently.

At the same time, all functions known from the previous model are still the same: the specially developed turbine is particularly quiet with a noise emission of 60 dB(A) within a radius of 20 m (66 ft). The turbine works with two speed levels, so it has the possible flexibility to spray fine water mist from 30 to over 55 m (98 to 180 ft). Thanks to a sophisticated valve technology, the amount of water can be controlled by remote control on three levels. Water flow is from 16 to 100 l/min.

Due to its low noise level the V12s is described as ideal for work in city centres or areas where noise levels need to be kept low. It is suitable for a range of industries including demolition and recycling.

Australian company Grydale has announced the appointment of  AJ Gammond as its United Kingdom dealer for its dust collectors. It described the dealership as a key part of its expansion into the European market.

AJ Gammond is a family run business established for over 40 years and managing director Bruce Gammond said: “We have been following Grydale with great interest over the last year and are looking forward to being able to offer an effective solution for dust control to the UK market.”

The link up included AJ Gammond sending a highly experienced team to Australia for training on the JMS M Series dust to work with Grydale’s engineering and manufacturing team during in-depth training and develop a close working relationship.

Grydale products include the JMS 50 LS hybrid dedusting system featuring a 250 kW centrifugal exhaust fan mounted on a single mobile base. The hybrid machine with Volvo Penta Tier 4/5 Final diesel engine is a large volume dedusting system that can be used for general ventilation as well as providing effective dust extraction at source. 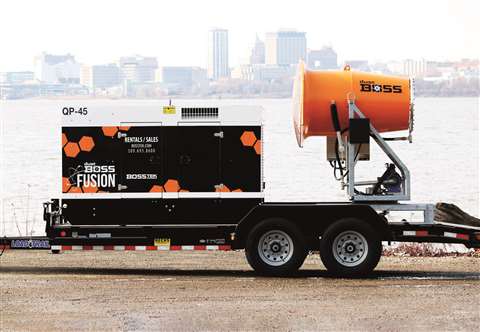 The BossTek DB-60 Fusion Unit, a Stateside solution updated for 2019

BossTek made the announcement with the debut of the new DustBoss DB-60 Fusion, a suppression system driven by a high-reliability 25 hp electric motor and paired with a genset powered by a heavy-duty four-cycle indirect injection diesel engine.

The new generator series is designed with sound attenuation for excellent noise reduction and a multi-voltage switch with utility power outlet in all voltage modes. The digital engine/generator controller is equipped with single button stop/start and a 300 litre fuel capacity, giving the units a run time of more than 24 hours at a prime rating of 45 kVa.