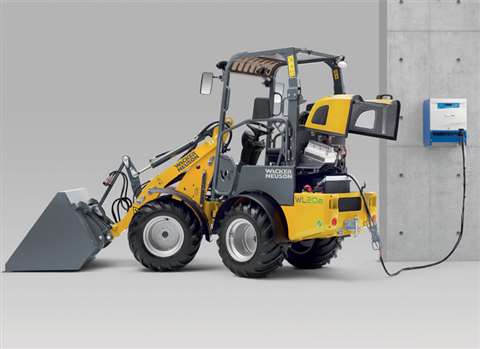 Wacker Neuson said it would showcase a range of compact machines including examples from its ECO range at the Intermat exhibition.

The new 0.2 m3 bucket capacity WL20e wheeled loader with an electric drive system for emission-free work will be on display. The machine features two electric motors, one for the drive system and one for the operating hydraulics, ensure that the performance features match those of the conventional machine, according to the company.

The new 10 tonne EW100 excavator will also be on the stand, featuring a new ECO operating mode, while visitors can also view the manufacturer’s 803 dual power mini excavator – which couples with an external electro-hydraulic power unit as an alternative to the standard diesel engine.

Another ECO product on show will be the company’s battery-powered AS 30 and AS 50 rammers, which also emit no exhaust emissions during applications, designed for compaction work in trench applications or indoors.

Wacker Neuson said it would also be expanding its soil and asphalt compaction range with the introduction of new tandem and combi rollers in the 1.8 to 4.5 tonne classes, as well as 7 tonne class drum rollers.

Wacker Neuson sister company Kramer also plans to present new compact machines, including new 5085 and 5085T wheeled and tele loaders from its basic series, with a bucket capacity of 0.85 m3. The 0.35 m3 bucket capacity 5035 wheeled loader will also be on show – the smallest basic line model that the company produces.

Machines from the 8-series of wheeled loaders, which is the premium line of products from Kramer, will also be on display, including the 8095 and 8115 models, which have bucket capacities of 0.95 and 1.15 m3 respectively.