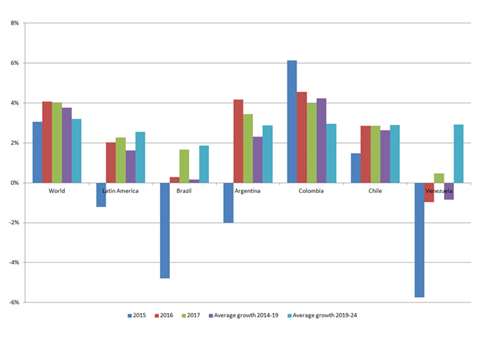 As the favourable external environment vanishes, old problems are surfacing in Latin America. The end of the commodity price supercycle and the end of easy and cheap credit is exposing the structural economic problems of old and the need for reforms.

Corruption scandals in the region are evidence that little progress has been made in terms of institutional reform, and this is now hurting business sentiment, investment, and growth prospects.
In addition, fiscal prudence has been abandoned in Brazil, and other countries are at risk of wider fiscal deficits as the plunge in commodity prices will constrain revenue.

Volatility in foreign-exchange rates is not necessarily bad news, as depreciation of local currencies will help reduce fiscal deficits. However, the inflation picture remains bleak in Brazil, Argentina and Venezuela, although in most of the other countries in the region, prices are stable and the risks of deflation are negligible.

The economic outlook for Latin America sees modest growth in 2015 and acceleration in 2016. However, the Brazilian economy, which heavily influences the regional average, is falling into recession again, and the outlook is not encouraging.

Once credible policies and commitment to structural reform are in place, the country might return to the path of sustainable growth. As it stands, sluggish growth is expected to resume in 2015 – IHS Global Insight’s latest forecast is for Brazilian GDP to contract -0.5% for 2015 as a whole before accelerating to +1.0 to +1.3% in 2016.

The recessions in Argentina and Venezuela will continue and Argentina is struggling to avoid a full-blown economic crisis. Government intervention is keeping the Peso on a managed devaluation trend, although there is the possibility of sudden drops due to the gap between the official and real-world exchange rates. Public sector deficits will persist even if commodity prices recover.

In Venezuela, the lack of official statistical data is adding to speculation on the severity of the country’s economic woes. In dealing with an annual inflation rate above 40%, the government will continue to blame the private sector and resort to failed policies from the past. IHS Global Insight’s forecast is for GDP to plunge -5.5% in 2015 and -3.7% in 2016.

On the bright side, Chile, Peru and Columbia will see modest growth. Colombia will grow +3.5 to +4.1% in 2015, with domestic demand looking strong, inflation below the central bank’s target and foreign direct investment (FDI) flowing to the extraction sector.
Peru and Chile will recover from a slowdown in 2014, although commodity prices (mainly copper) will preclude a strong rebound. Sound macroeconomic fundamentals and a dynamic domestic economy will drive the acceleration of these two economies during 2015.

The impact of lower prices will differ within the region. Lower oil prices are good news for Chile, Uruguay (and Caribbean and Central American nations), but not for oil exporters Ecuador, Colombia and Venezuela. Bolivia may be hurt as well, as contracts for gas exports are partly based on oil prices. Peru and Brazil are net importers and will benefit slightly from the lower cost of fuel imports.

The relative waekness of Latin America compared to the world is shown by the graph for total construction. Spending will contract in 2015, and post gains lower than the global average over the forecast period.

Despite the need for its Olympics build-out, the weakness in Brazil combined with poor performance in Venezuela and Argentina will hold the region back.

Brazil’s outlook is further clouded by Operation Lava Jato (Car Wash), the investigation into alleged kickbacks at state-owned oil company Petrobras. The investigation is having negative effects beyond the energy sector, such as shipbuilding, airports and highways. What’s more, the investigated companies are responsible for 8 of the 10 largest public works projects in the country and it is likely that the probe will derail or cause severe delays to key schemes.

Residential construction is slowing on a regional basis, largely due to Brazil, where credit restrictions, weak household income and the conclusion of the government’s popular housing program Minha Casa, Minha Vida (My House, My Life), a BRL 278 billion (US$ 95 billion) programme.

Housing shortages and affordable homes remain an issue for Venezuela where spending on public housing is being curtailed by over a third.

Peru has one of the stronger housing markets in the region, and shortages will persist even with modest growth over the next few years. The country needs an estimated 1.9 million homes in the near future, and rising wages and low mortgage rates have driven home prices up 121% over the last five years.

Infrastructure spending is vital to the region’s economies, but it is bearing the brunt of the slowdown as fiscal problems limit public investment. Argentina, Brazil, Chile and Venezuela all reduced spending in 2014, and will remain parsimonious in 2015 and 2016.

Apart from Venezuela, growth will return, but it will be limited. Chile, in particular, will be making investments in energy infrastructure. Given that Chile has virtually no reserves of non-renewable energy, it risks becoming reliant on Argentina and Bolivia for fuel imports. Accordingly, the government is focused on developing renewable and unconventional energy projects, particularly hydroelectricity and solar-power.

Brazil and Argentina have the largest markets for infrastructure, and are the most exposed to economic slowdown and fiscal challenges. Infrastructure spending for the region will average under +1% growth over the next five years, hindering total construction market growth.

Latin America still faces significant challenges in the near term, and the largest markets will see little governmental leadership. Of the major economies, only Columbia could be considered to have a strong market.

There is potential in some smaller economies, such as Peru and Ecuador, but are not big enough to make a difference on a regional level. The situation is particularly grim for the heavy equipment sector, as cuts to infrastructure combine with weakness in mining and energy to limit potential.