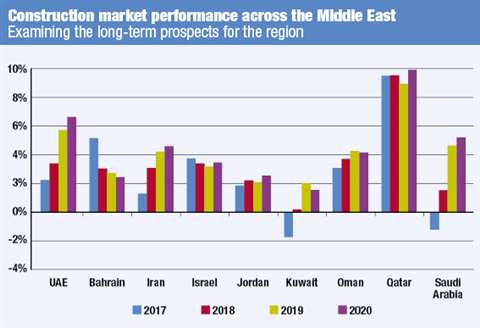 The oil price outlook is critical to expectations for the region. There remains much uncertainty regarding the oil market, including Libya’s ability to sustain the recovery in its oil output, security and technical issues affecting Nigerian production. Fallout from regional crises will continue to cloud prospects for growth. Fighting continues in Syria and Yemen. While the Saudi economy has not been materially impacted by the war in Yemen, the Syrian conflict has taken a significant economic toll on Jordan, Lebanon and Iraq.

Higher oil prices will allow Saudi Arabia to continue its ambitious Saudi Vision 2030 initiative to diversify its economy from oil. A key component is the National Transformation Program, three five-year phases of goals and targets, with the first to be completed in 2020. The vision includes tourism investments, including a luxury resort on the Red Sea featuring 50 islands and 34,000km² of upscale tourism and leisure developments.

A $4.8 billion effort to re-develop the Jeddah waterfront is expected to launch in 2019, creating five million square metres of residential and commercial space. The most audacious proposal would invest $500 billion into a new city on the Red Sea, named Neom, that would include a bridge spanning the Red Sea to Egypt.

The Trump administration’s decision to withdraw from the Joint Comprehensive Plan of Action (JCPOA) between Iran and the UN Security Council and apply primary sanctions on Iranian oil exports and secondary sanctions on companies doing business with Iran will lead to sharp revisions in the outlook. Uncertainty remains the watchword for at least the remainder of the year, with substantial downside risk remaining on Iran’s outlook. While the current forecast features modest growth for Iran’s construction market, it is likely that will diminish significantly as developments unfold.

The UAE will also see an improving construction outlook, given strong oil production and prices. The construction, trade, tourism, and transportation sectors are expected to strengthen as investment into infrastructure and development projects picks up after the slowdown of the last two years. Alongside project spending associated with Dubai’s Expo 2020, Abu Dhabi has announced a three-year, $13.6-billion stimulus package to jumpstart non-oil activity.

Efforts to promote key non-oil sectors and attract investment have been highlighted to boost activity across the UAE and create jobs, with new incentives offering ten-year residency visas for foreign investors and professionals, and 100% ownership of companies to foreign investors. Although authorities are taking a more prudent approach to launching projects, with new regulations and improved governance, the economic boost from the Expo will be significant.

The inflow of foreign investment will shift from Dubai to other major urban centers such as Abu Dhabi. Other emirates have just begun to open their economies and imitate Dubai’s economic policies. While their expansion will not reach the magnitude of Dubai’s, it will sustain the country’s growth momentum. One of the important factors that will contribute to the UAE’s long-term growth is the large volume of fiscal resources currently being spent on infrastructure and education. Both federal and emirate governments are investing in the expansion of the country’s roads and the development of rail transportation. 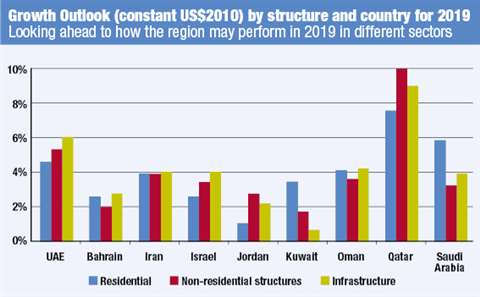 This chart indicates the importance of infrastructure to regional development

Qatar’s economic outlook should be brighter in 2018 as the impact of its rift with Saudi Arabia, the UAE, Bahrain and Egypt diminishes in severity. While both sides have yet to find common ground, the blockade has not materially affected Qatar’s hydrocarbon sector.

Qatar aims to devote $200 billion in capital spending during the next few years. Although most of the projects are linked to the 2022 FIFA World Cup, the government will also invest in transport, infrastructure, health, and education.

With higher and slowly rising oil prices, Middle Eastern construction markets return to growth. While regional risks undoubtedly remain, they are less threatening than a year ago, and opportunities are among the strongest of any region, including Asia.