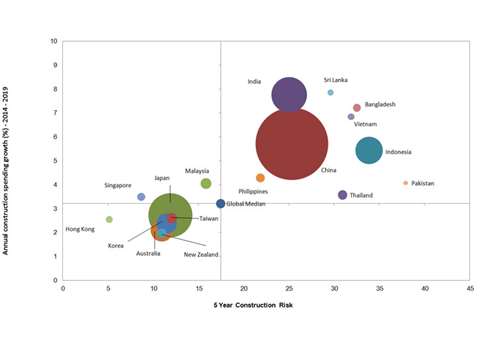 The Asia-Pacific region continues to lead global economic growth. The region is projected to expand +4.8% in 2015, considerably higher than the world average of 3.0%. However, this headline number conceals variation across the region’s economies.

While Japan should be stronger in 2015 following near stagnation in 2014, the opposite is true in China, where IHS Global Insight expects the slowdown to intensify in the near term. Chinese economic growth will moderate to +6.5% in 2015.

Meanwhile, India is shining brighter than it has for some time, and not simply due to historical data revisions. Aside from the cyclical lift from lower commodity prices – which helps to reduce inflation, fiscal deficits, and external imbalances and allows interest rate cuts – there appears to be genuine progress on reforms.

The decline in global oil prices is a plus for Asian economies, particularly the large hydrocarbon and energy importers. Aside from the direct positive effects on external balances, there is also a broader beneficial effect of lower inflationary pressures and a subsequent boost to household buying power and corporate profit margins.

Thailand, the Philippines, India, South Korea and Japan should be among the biggest beneficiaries of the price declines, while Malaysia, whose fiscal revenues are highly dependent on hydrocarbon revenues, stands to lose out.

The strongest negative impact, however, is likely to be felt in the small economies of East Timor and Brunei. Meanwhile, weakness in prices of minerals and other commodities will adversely affect Malaysia, Australia and Indonesia.

Fiscal policies will gradually turn less accommodative, but low inflation will delay monetary tightening. The financial market volatility of the past year has refocused attention on fiscal health and structural reforms and Malaysia, Japan, India, and Indonesia, are among the countries which have revived efforts to tame excessive fiscal deficits.

Subsidy reform is one tool increasingly used across the region, and tax reform is another. As a result, fiscal discipline is likely to strengthen, so support for construction investment from fiscal spending will diminish. On the other hand, the plunge in oil prices has unleashed powerful deflationary forces across the region, to which central banks have responded by pushing through monetary easing or delaying additional rate hikes.

Asia’s manufacturing landscape is undergoing important changes, with both regional and global implications. As China moves up the value-added chain, due to rising incomes and labour costs that have eroded its competitiveness in low-cost industries, it will compete more directly with current trading partners within the region and globally for investment and market share.

While this presents a risk for countries such as Korea, Japan, Malaysia and Singapore, new opportunities are arising for lower-cost countries such Vietnam, Cambodia, Indonesia and India.

These countries have the potential to benefit from improved market share as China exits some low-end industries, as well as from increased investment and outsourcing from the very countries now more directly threatened by Chinese competition. There is compelling evidence that this phenomenon is already taking place, with countries such as Korea and Japan sharply boosting investments in the Association of South East Asian (ASEAN) countries in recent years.

Much of the region falls into the lower left quadrant - slower growth, but also low risk, or the upper right quadrant which offers higher growth, but also higher risk. Singapore and Malaysia have the enviable position of offering above average growth with below average risk. Indonesia, India and a band of smaller countries join China offering above average growth with some higher risk exposure. Pakistan and Thailand hover just over the threshold of lower growth and higher risk due to their political uncertainty.

Japan, the largest low risk market in the region, saw its economic growth resume in the fourth quarter of 2014, led by an improvement in net exports. Lower oil prices are supporting consumer purchasing power, while a weaker Yen is boosting exports and corporate profits.

Labour shortages will encourage capital-intensive development, although long-term growth will depend on how the Abe administration implements reforms in labour and product markets.

Housing starts are also showing signs of life, due to new stimulus measures and low interest rates. A stimulus plan that injects US$ 30 billion in 2015 and another US$ 42 billion in 2016 will help accelerate the economy, although we still expect real GDP growth of only 1.4% in 2016.

In the longer run, a declining and aging population limits Japan’s long-term growth potential, and high government debt may become a serious challenge.

The outlook for Australia as a whole, and construction in particular, has been weakened by the slowing Chinese economy which had lowered the demand for Australian raw materials as well as their prices. New Zealand has moved from high to low growth as its earthquake rebuilding efforts have wound down.

A recovering global economy, especially in the US, will increase demand for high technology products which benefits Asian markets, especially Taiwan, Korea and increasingly Vietnam and the Philippines.

Over the past year, total construction growth potential has fallen, almost solely due to China. Most emerging markets still perform quite well, with India moving upwards. The region as a whole offers above average potential, with key countries as solid bets for the medium and long term.