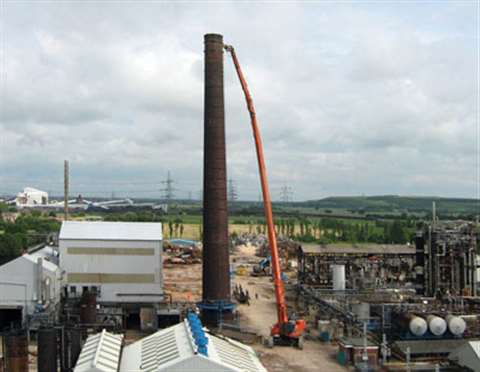 Euro Decommissioning Services (EDS) is currently finishing off the demolition and site clearance at the former Oxiris chemical factory in Knottingley, UK. The factory was closed last year by its German owners, Arques Industries, as a result of increased competition from companies in the Far East.

EDS started on site in March 2009, and to date has demolished some 70 concrete, brick, steel and timber constructions, in addition to a 50 m (164 ft) brick chimney that was brought down by the company's 60 m (197 ft) high reach demolition excavator.

According to EDS operations manager Greg Lannon: "This project is a highly complex and delicate operation due to the volume and variety of chemicals within the site. The site operated around five production units which manufactured cresols, sulphonic acids, thiophenes, phenolic ethers and polyacrylate over seven separate plants or zones. In order to conduct the programme of works to the highest level of safety, we undertook detailed studies of each chemical zone in order to locate residual products accurately. Additionally, we employed two former plant workers on a consultancy basis, who have a combined site experience of some 60 years, to advise on our approach to each zone."

Further decontamination and site clearance work is ongoing and the project is due to be completed by September of this year.