Equidist speeds up drilling for Hilti

Diamond drilling specialist Hilti has announced that it is renewing its entire core bit portfolio. 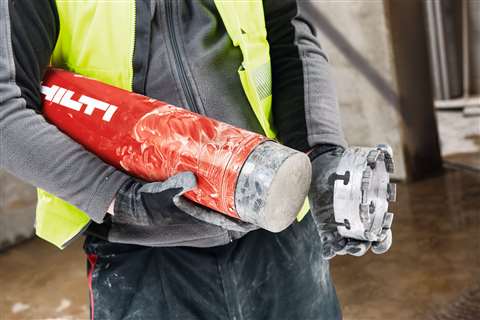 Hilti said the new range works well with the X-Change Module, allowing for easy re-tipping of core bits on site

The company said it is making its SP and SPX core bit ranges even better performing and easy-to-use with the use of Hilti Equidist (EQD) technology, which delivers increased drilling speeds of up to 50% when compared with their predecessors.

During the manufacturing process high-quality, industrial grade diamonds are precisely placed at an equal distance and in the best possible formation to deliver even higher drilling speeds and durability.

Hilti Equidist (EQD) ensures that all the diamonds in the cutting edge are in constant contact with the base material to maximise productivity throughout its lifetime.

In recognition of the fact that different materials require different diamond segment specifications the company has also began colour-coding its core bits for easy recognition. Those marked with a grey dot are for use on concrete, green for abrasive concrete and orange for masonry.

The new range works with the Hilti X-Change Module (X-CM), which allows users to quickly and easily re-tip core bits on the jobsite.

Core bits traditionally come as one single unit which means that when the diamond segment wears down, the entire unit had to be sent for re-tipping. The X-CM features a removable ring on the barrel which can be quickly and easily removed with a screwdriver before a new one is pushed, twisted and clicked into place.

With standard core bits there can also be challenges if the core bit gets stuck in the hole or base material lodged in the barrel, which increases downtime and can result in a damaged unit. With the Hilti X-CM the system’s geometric design means users can simply remove the ring and slide the core out, providing a quick and simple solution for previously costly and time-consuming situations.

The X-CM’s removable ring also makes it possible for users to pack one barrel alongside different rings for different base materials, all in one small portable bag.