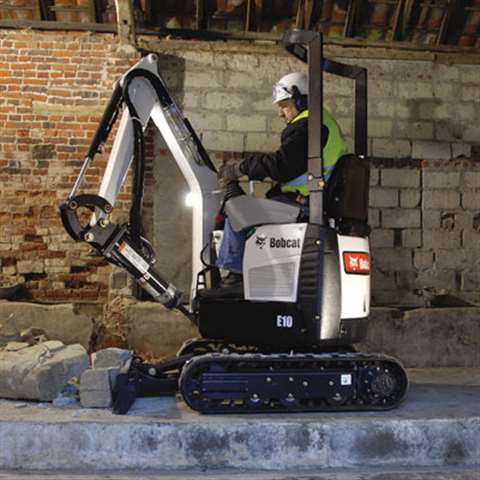 Bobcat has launched the new E08 and E10 (pictured) micro-excavators - the smallest models in the Bobcat range – weighing 1.3 tonnes and 1.7 tonnes respectively.

Compact equipment is growing in popularity in markets such as India, China and Latin America according to manufacturers, but low labour costs in these countries is preventing any rapid market development. Becca Wilkins reports.

The global compact equipment market is showing signs of change mainly due to a slow down in the US market and increasing demand in emerging markets such as China and India. What was a strong sector in all major markets is now appearing less stable.

In 2007 the worldwide market for mini excavators totalled more than 130000 units. Meanwhile, sales of skid steer loaders reached 70000 units and compact wheel loaders totalled 25000 units. According to the latest figures from Off Highway Research equipment sales will not be as high this year. Despite the slow down equipment manufacturers have told iC they expect the overall market to be flat in 2008 rather than it experience any major decline.

Pier Daniele Ferri, executive vice president of the global alliance between New Holland Construction and Kobleco, told iC, "With regards compact equipment, Latin America is still a market where the backhoe loader is still very popular and other compact machines like the skid steer loader and mini excavator are becoming more popular but they are still a niche market and labour costs are still low, so manual labour is still used instead of machines."

According to Mr Ferri, although not strictly considered a compact machine, the backhoe loader is popular in most underdeveloped markets because it is versatile and cheaper than other compact equipment and is growing the fastest in India. In Asia Pacific, meanwhile, where labour is still cheap and heavy equipment is generally preferred, compact machines are becoming more popular, he said. Mini excavators in particular are growing, albeit slowly, in this region.

"Developing areas are moving along - as more large-scale construction projects are completed the more you need to do maintenance work and this is where the compact machines are needed," Mr Ferri said.

"With compact machines you are really competing with hand labour which is still very inexpensive in China. There's more potential to develop the market for the larger sized mini excavators there because they are still reasonably priced and they can do more than the hand labourers," Mr Miller said.

He added the South American compact equipment markets have traditionally been dependent on government stability but said there is room for growth here despite the low cost of manual labour.

According to Mr Miller the market for skid steer loaders in China has been a little slow which he said could be attributed to difficulties with replacing manual labour or due to the fact that demand for machines featuring sophisticated technology is not yet required here.

Todd Lynnes, supervisor for Caterpillar commercial marketing said, "China has been an interesting market because it is a relatively small industry for skid steer loaders. We estimate about 250 to 300 units a year being sold in the country right now most of which are imported by world class manufacturers but we are starting to see a lot more Chinese manufacturers coming out with skid steers now... "We (Cat) are over there testing the market, carrying out research and trying to grow the market."

Todd Dohnal, International sales manager for Mustang manufacturing and Gehl company, said the compact equipment market is increasing ‘dramatically' in Asia, South America and the Middle East. He said the growth rate of compact equipment has increased in the last 12 months in South America, including countries such as Argentina, Chile, Colombia and Venezuela, and currently stands at +23% compared to the same period last year.

He added skid steer loaders have seen the most explosive growth in this region.

Mr Dohnal said the company will continue to see these markets increase over the next few years. He added the Mustang brand has been well received in Australia and in South Africa preparations for the 2010 Football World Cup is also providing good business.

Meanwhile, business in the US market has been disappointing for compact equipment manufacturers in the past year because much of the machinery is tied to the housing market. Jim Hughes, brand marketing manager for Case in North America told iC 2008 is going to be challenging for skid steers and compact tracked loaders with industry numbers projected to be down.

"We (Case) are projecting our market share to grow ... but the industry volumes are projected to fall," he added.

He said the compact tracked loader market has grown at a more rapid pace than the skid steer market because they are relatively new machines.

"People are only just finding out what that machine can do for them and so there has been some significant growth over the last few years."

Mr Lynnes echoed these sentiments. He said during the last five years one of the trends in the US market has been the growth of compact tracked loaders.

"This is because of the versatility these models offer. They are able to work in soft underfoot conditions and the amount of traction and stability you are able to get with these machines allows for more control, more digging performance and more up-time," Mr Lynnes said.

Heavier skid steers in the US market are another trend, he added.

The slow down in the US market has affected everybody in the sector, according to Mr Lynnes. "But I think there are still growth opportunities for Cat's products in this market - especially when you look at the versatility of the machines - people are still finding new uses for these machines because of their work tools and attachments."

Meanwhile, David Wolf, brand marketing manager, for Case in North America said the market for compact excavators grew in 2007 but flattened out towards the end of the year. He added up until now the market had been growing by +10 to +15% year on year.

"The compact excavator is a valuable tool to anybody, it's easy to transport, can work in very tight locations - it's a very versatile machine and so I would say there is potential for worldwide growth," Mr Wolf said.

Contractors are increasingly using compact equipment because it can be applied to many different jobs on a construction site. Mr Miller said tracked skid steer loaders are ideal for working on varied ground conditions and where extra floatation of the tracks is needed.

"The weight of the machine with its tracks on the ground allows for more pushing power and more digging performance - and, if you are using a bucket, - more loading performance," he said.

Mr Hughes said skid steer loaders are very popular in the US residential and commercial construction markets, the agricultural and landscaping sectors as well as for road and bridge construction and utility work.

"The diversity of the attachments is what really what makes these machines so popular on all jobsites, Mr Hughes said. "They are versatile, have a small footprint and therefore great manoeuvrability."

Meanwhile, he said compact tracked loaders are mainly used for landscaping, residential construction and utility work as well as being popular in the rental market.

According to some manufacturers there is a trend for larger compact machines in the US market.

Mr Dohnal said, "Mustang has stayed fairly small over the years - the 614 to 748 kg range has primarily been our dominant size class for our company's skid steers. Now we are just starting to see that market get a little bit bigger - the 900 and 1200 kg class is getting a little stronger. It seems as if the knowledge of what these machines can do is getting out there."

New compact equipment launched at various exhibitions - the World of Concrete, Samoter and ConExpo - earlier this year, feature engines compliant with Tier 3 (Stage IIIA) emissions regulations. Some manufacturers have updated and re-launched models to comply with this legislation. Tier 4 requirements do not apply to smaller engines between 19 and 37 kW and Tier 3 emissions regulations in the 37 to 56 kW powerband are the same as Tier 4 requirements - therefore no change after Tier 3 is expected in this engine range.

Improving the operator's working environment in the machine remains an important driver in new product development.

Mr Hughes said operator comfort is a big factor in productivity. "That's why Case is always striving to improve the cab and operator's platform when designing and upgrading models," he said.

Mr Miller echoed these sentiments. He said, "To find a good operator in some cases is difficult so the better the cab, the longer you can retain that operator."

The issue of fuel efficiency is also starting to become more important to the compact equipment sector in North America according to some manufacturers.

Mr Wolf said the challenge now was to find a way of continuing to bring down engine displacement and achieving the same or more horsepower while balancing out fuel efficiency and productivity.

The latest report from Off-Highway Research reveals emerging markets, particularly China, as areas of future growth for compact equipment. According to the research the outlook for China is for more growth across all product sectors, "the most significant new trend being the remarkable rise in popularity of mini excavators." The research also projects an increase in mini excavators as well as skid steer loaders in India during 2008. However, the research forecasts a decline in the top three markets for mini excavators; Western Europe, North America and Japan and it is a similar outlook for sales of skid steer loaders.

Manufacturers say that sales of compact equipment will fall in the US market during 2008 and increase slightly in developing regions of the world. They believe the overall compact equipment market will flatten out in 2008 rather than experience a huge decline.