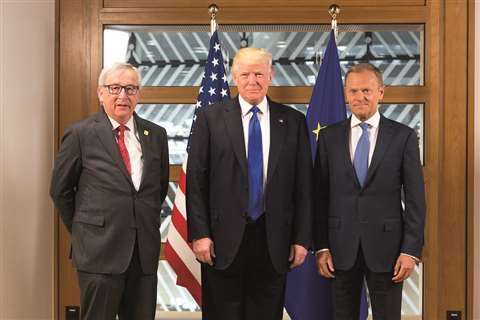 With the political uncertainty that is currently occurring in Europe at the moment, it would be difficult to find someone with all the answers for the future of Europe’s construction industry. However, despite this uncertainty, the industry has cause for optimism going forward.

For example, construction equipment sales in Europe last year hit their highest level for a decade, according to specialist market research and forecasting company, Off-Highway Research. Sales rose 10% to 177,694 units.

This took demand to its highest level since the global financial crisis, although it was still some 15% lower than the remarkable peak of 210,000 units sold in 2007. However, the company said that the boom of the mid 2000s took the market to unsustainably high levels, resulting in a prolonged and painful crash. At the current level, European equipment demand is regarded as extremely healthy.

Off-Highway Research managing director, Chris Sleight said, “Equipment sales increased in every Western European country apart from Switzerland last year and the market was more buoyant than many expected. Sales could have been even higher were it not for supply issues and long lead times for some equipment types.”

France, Germany and the UK accounted for 64% of European equipment sales last year, with all three seeing growth. Germany had the biggest share of sales, with demand for construction equipment at 43,106 units last year.

It isn’t all plain sailing though, as there is an ever-present feeling of something unknown in the water.

With the current geopolitical climate, trade links are more important than ever to maintain. The European Union (EU) will need to look to its trade partners to get the best fair-trade deals available to its member states.

Liebherr-France celebrated the manufacture of its 60,000th excavator to be built by creating a one-off special edition model of its latest R 922 excavator range

Both the US and the EU have their own agendas concerning any agreements. The US aims to reduce the trade deficit with the EU, whilst the EU, with its export-oriented industry, is particularly interested in limiting the burden – both financial and administrative – for placement of products in the US market.

More recently, the Committee for European Construction Equipment (CECE) launched its latest manifesto aimed at the candidates of the May 2019 European parliamentary elections. A common goal discussed was for greater collaboration in the construction value chain with the European Commission to develop the construction sector in Europe.

Member of the European Parliament, Jens Gieseke, said that a European strategy was needed if it was going to compete with counties like China. Speaking about the US, he said if Donald Trump was promoting an ‘America First Strategy’, “Then we have to have an answer. What is missing is openness.”

German machinery manufacturers have said that construction’s positive outlook must not be jeopardised by potential political chaos in Europe. A meeting was held by German machinery manufacturers at the VDMA German construction equipment and building material machinery trade association’s conference, where they expressed their concerns that the EU must not be allowed to collapse in the wake of current political turmoil.

The feeling from the manufacturers was that there were many positive prospects on the horizon and that, in the wake of the European Parliamentary elections on 26 May, politicians must not lose sight of how important the construction industry is to the livelihood of the 500 million people living in European countries. 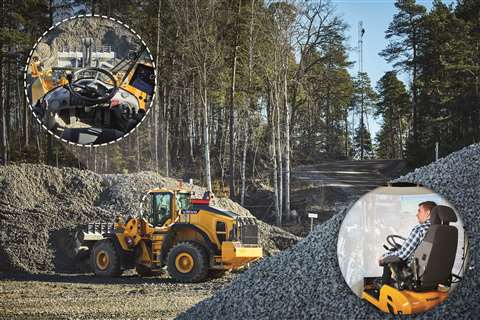 5G technology is to be implemented into remote controlled machines, improving safety and efficiency

Dubbed the fourth industrial revolution or construction 4.0, digitalisation in the construction industry is seeing greater investment. According to the latest economic report from financial services firm ING, companies are now investing more in software, relatively speaking, than they are in new equipment.

The president of FIEC (the European Construction Industry Federation), Kjetil Tonning, said, “It is a threat that the stakeholders and the authorities consider the IT industry to own this topic and not the end user, which is the construction industry.”

The ability to steer the future of the construction industry in terms of digitisation is said to be of great importance. Both FIEC and CECE believe that only sensible and useful innovations that make the jobsite more efficient – and safer – should be implemented into the industry.

Staying with the theme of new technology, Europe will soon be seeing the implementation of a 5G network for industrial activity.

Technology firms have launched a 5G network in Sweden that has been made available at Volvo Construction Equipment’s (Volvo CE) research facility in Eskiltuna.

As one of the first companies in the world to have access to the technology, Volvo CE will be testing the potential applications on its remote-controlled wheeled loaders.

In comparison to the current 4G network, 5G is faster, has a shorter lag time, higher accessibility and is able to handle more connected devices at the same time.

The new technology should help to reduce the delays seen in inputs from an operator to radio-controlled machines. It is said that this will offer a greater degree of precision to the operator and make the machine safer for people nearby.

Over the past few months major investments have been made in key transport links that will play a big role in industry growth.

The Société du Grand Paris plans to invest €3.5 billion (US$3.96 billion) in 2019 – an increase of approximately 40% compared to 2018. The Grand Paris project currently represents 65 civil engineering projects and 35 preparatory works on the entire network. Currently there are only three tunnel boring machines (TBM) in operation on the south track of line 15, however, there are expected to be a dozen in simultaneous use by the end of 2019. By 2020, there are expected to be 21 TBM working simultaneously.

Another major project, the UK’s HS2 high-speed rail line, has recently seen contracts awarded to contractors Mace, Dragados, Balfour Beatty, Vinci and Systria. It is claimed that the project will support 15,000 jobs by 2020, and as many as 30,000 at the peak construction period. One of the UK government’s plans to keep HS2 on track is the addition of 2,000 apprentices that will be involved in the design and building aspects.

Artist’s impression of part of the new Genoa replacement bridge

Over 7,000 jobs are currently said to be supported by the project. HS2’s CEO, Mark Thurston, who began his career as an apprentice himself said, “We are committed to equipping the next generation with the technical skills to not only  help design and build HS2, but to leave a lasting skills legacy for the country.”

Elsewhere, a Chinese investment firm has offered €15 billion (US$16.96 billion) in investment to part-fund the world’s longest underwater rail tunnel.

When completed the rail link is expected to cut travel times to around 20 minutes, benefitting tens of thousands of daily commuters who currently make a two-hour crossing by ferry.

Following a period of sustained growth in the EU, investment in infrastructure has been declining since 2009, following the worldwide financial crash of 2008. While there has been a gradual easing of this negative trend since 2015, investment rates remain below pre-crisis levels. 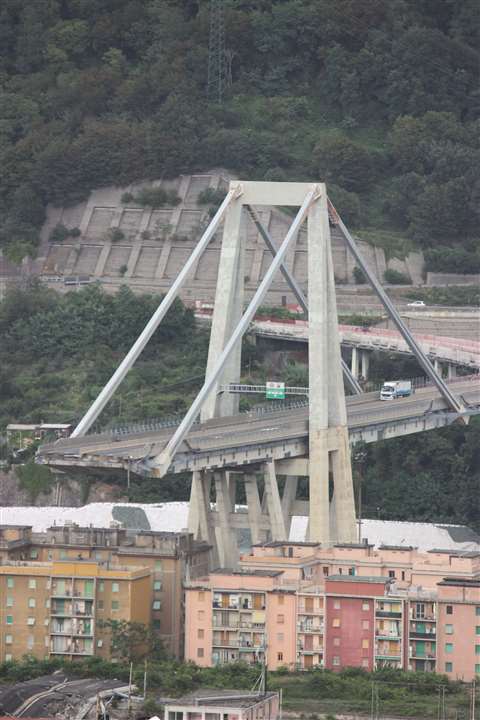 A section of the Morandi Bridge in Genoa, Italy, collapsed in stormy conditions last year

Projects that could link transport and infrastructure with new 5G technology moved a step closer after the European commission (EC) set out rules that will accelerate deployment of Cooperative Intelligent Transport Systems (C-ITS) on European roads.

The C-ITS project is intended to be used in the development of automated transportation. The idea is that vehicles will be able to communicate with each other and road infrastructure, such as traffic lights and electronic signage, to create a safer environment on the roads. However, the plans have been criticised for supporting existing wi-fi networks over new cellular technology.

Further European infrastructure construction is planned in Stockholm, Sweden. A total investment volume of €111 billion (US$125.44 billion) up to the year 2040 has been reported by investment agency, Invest Stockholm. This bulk of the money would be spent on housing and rail projects. This is a significant increase from the figure projected in 2017, when investments were worth €95 billion (US$107.36 billion).

In 2020 Stockholm will have a population of one million people. By 2030, the city is expected to see a 40% increase of inhabitants to 1.4 million.

With a rapid growth of people and business, the need for new infrastructure, housing and workplaces is vital. Over half of the total investments are in residential buildings, with the planned projects creating more than 400,000 dwellings. 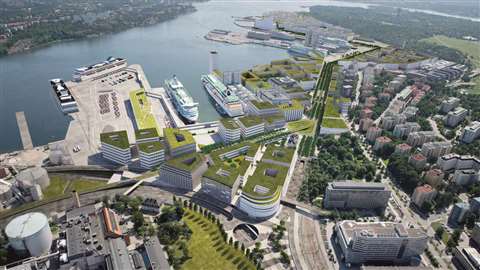 The sheer volume of planned construction in the region exceeds what can be accomplished by the current regional workforce. In order to achieve the targets by 2040 there will need to be an additional 46,000 construction workers employed in the region.

In other positive news, construction of a replacement bridge after the disastrous Genoa bridge collapse in Italy is said to be ready to commence by 31 March, 2019. More than 40 people were killed in August 2018 when an 80m section of the Morandi Bridge collapsed in stormy weather.

The original bridge was just over 1km in length. The new bridge, which is expected to take over 12 months to be completed, will be 1.15km.

The bridge, designed by architect Renzo Piano, will be built by contractors Salini Impregilo and Fincantieri.

Salini Impregilo’s CEO, Pietro Salini, said, “Twelve months to help relaunch Genoa. That is the dream that we are hoping to give the Genoese before Christmas, to relaunch the city as quickly as possible and send a strong message to the entire country. Public works can kickstart the economy and start to create jobs again.” 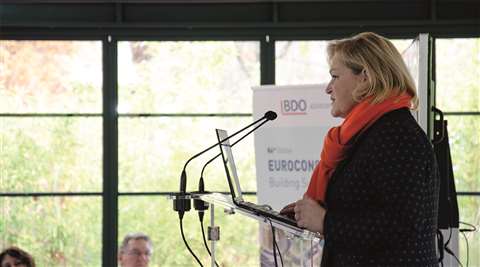 In 2017, the European construction industry saw output grow in all 19 Euroconstruct (a European research network specialising in construction) member countries for the first time since Germany’s reunification in 1990, achieving an overall growth peak of 4.1% by volume.

At the 86th Euroconstruct conference held in November, 2018, in Paris, France, it was discussed that the market may have reached its full growth potential. A slower growth of 2.8% was predicted for 2018’s year end and, looking ahead to 2019-2021, a growth rate of 1.6% is predicted. Although, this figure is a slower rate, it is likely to be more sustainable.

The construction market volume for 2021 is expected to remain 15% behind the pre-crisis level seen in 2007 for the Euroconstruct countries. However, once the biggest outlier countries have been accounted for – Spain, Ireland and Portugal – the output for the remaining member countries is expected to recover to previous levels.

Valérie Plagnol, an economic advisor at Le BIPE, said that Europeans were not appearing to be comforted by the improved economic data.

The negative effects created by the withdrawal of the UK from the EU was said to be causing issues with public opinion, believing the prospects of a no-deal Brexit will create mass disruption.

Despite this, the forecast for total construction across the Euroconstruct countries between 2018 and 2020 had been revised upward by 0.1% compared to the figures announced in the previous Euroconstruct conference held in Helsinki, Finland, in June.

In the EU construction sector, confidence seems to have reached a peak, now that it is back at pre-crisis levels. This increase in confidence is expected to energise the new-residential sector.