Conditions in the European equipment rental market, along with optimism for the future, remained at a high level in the third quarter of 2017, according to the ERA/IRN RentalTracker. 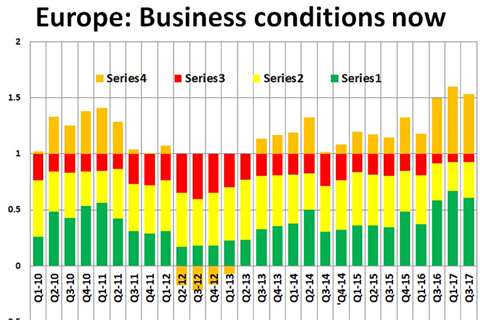 After a record-breaking first quarter this year, which saw 60% of respondents opting to answer ‘improved’, rather than ‘stable’ or ‘deteriorating’ to the survey question based on current market conditions, the results time round were marginally down from that, but still comprised a balance of 53% – second only to this year’s first quarter since the ERA/IRN RentalTracker began in 2009.

Reviewing the overall trend of current market conditions, a second-best record 53% of respondents said they felt market conditions were improving, compared to a record balance of 60% in the first quarter of 2017 – the last time ERA/IRN Rental Tracker survey was published.

Most notably, 85% of respondents in France said they believed market conditions were improving.

This is echoed by the ERA, which has forecast steady growth in France through to 2020.

Going hand-in-hand with improving market conditions is a general perception of year-on-year growth and, that said, there was also a strong balance of respondents saying that conditions had improved since the third quarter of 2016, at 50.8%.

Looking back at the comparable 2016 third quarter ERA/IRN RentalTracker, however, a marginally balance of 51.4% said improvements had been made year-on-year.

Again in Spain, 83% of respondents said this was the case while, while 63% of French respondents agreed.

Looking ahead to the next 12 months, an overall balance of exactly 50% of respondents said that they expected market conditions to be better in the third quarter of 2018. As previously stated with France, most European markets are said to be on the up over the next few yards, according to the ERA, hence the optimism.

This time there were 80% of Spanish respondents believing the next 12 months would see an improvement.

The Spanish market is one of Europe’s strongest in terms of growth rates at the moment, which explains the strong belief of growth within respondents’ respected businesses.

In France, 63% of respondents said the next 12 months would reap improvements, which continues the general theme of French optimism.

In the UK/Ireland, exactly 60% of respondents said conditions would be better in 12 months, while just over 13% said they would be worse, and the other 27% saying they would be the same.

Overall, the ERA/IRN RentalTracker has continued to see general optimistic in the third quarter of 2017, following a record survey for the first quarter of this year. This can, however, be taken with a degree of perspective, given that, in 2009, the European economy experienced a recession which lasted a number of years.

Extended analysis of the ERA/IRN RentalTracker will be available in the November/December issue of IRN.