The European construction equipment market enjoyed a fourth consecutive year of growth in 2016, with sales rising 10% to almost 141,000 units. This was the highest level the market has achieved since the global financial crisis of the late 2000s.

Most countries in Europe saw an increase in equipment sales last year, the exceptions being Ireland, the Netherlands and the UK. Of these declines, the 6 % fall in the UK was most significant in terms of pulling down the overall result for Europe.

On the positive side, strong growth in the three other major markets of France, Germany and Italy more than offset these losses. There was also support from several smaller European markets, most notably Finland, Spain and Sweden, which enjoyed double-digit sales growth. The resurgence in Germany saw it overtake the UK once again as Europe’s largest equipment market – a position it should generally hold, given its larger population and land area.

In fact, the German market positively boomed in 2016, with equipment sales exceeding 37,000 units for only the second time in the country’s history. The last time this occurred was 2007, at the pre-crisis peak.

Elsewhere in northern Europe, Finland, Norway and Sweden also had strong years and demand in Norway and Sweden was higher than the pre-crisis peaks seen in 2007 and 2008. The fact that in 2007 the European market peaked at just over 210,000 units, compared with the 140,963 sold last year, illustrates how strongly the Nordic region is currently performing. 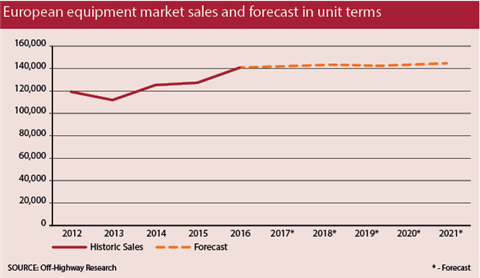 But the picture of relative health in northern and mid-Europe is in stark contrast to the southern countries. The ‘least worst’ market is Italy, where strong growth over the last two years in particular has pushed volumes up. However, the 24% rise in 2015 and a further 25% last year is not yet enough to repair the damage done when the market fell in the immediate aftermath of the global crisis.

Elsewhere in the south, Spain remains extremely weak. In the pre-crisis years the market stood at around 20,000 units per year and accounted for 10% of European demand. Now, despite strong growth in percentage terms over the last two years, it still only accounts for 2% of the European total and is only about 15% of its former size.

In terms of equipment types, the most significant growth sector last year was mini excavators. Sales increased by 16% and these machines continued to be by far the most popular type of equipment in Europe, accounting for 39% of sales in unit terms. Meanwhile, the boom in Germany was very positive for wheeled excavator and compact wheeled loader sales.

On the negative side, the backhoe loader continues to decline in popularity in Europe, replaced by compact excavators and telescopic handlers. Last year backhoes accounted for just 2% of sales in unit terms, compared to more than 7% a decade previously. Backhoe loaders have never been universally popular across Europe, but their star is waning even in stronghold markets such as the UK and France.

Overall the European market is expected to stagnate between 140,000 and 145,000 units per year over the next five years. There will be pockets of growth and decline in different countries and product types, rather than a uniform overall trend. Markets which are currently strong, such as Germany, France and the Nordic region, look to have more or less peaked, and could see moderate declines in the years to come. This should be offset by continued growth in southern Europe, but as relatively small markets, they will not provide enough additional volume to push up overall European equipment sales.