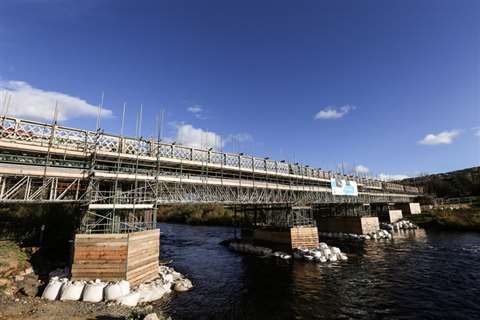 Scaffolding contractor Xervon Palmers is providing access for the UK£3m (US$4.6m) refurbishment of the historic Ovingham Bridge over the River Tyne, in the north east of England.

Scaffolding and access work began in March 2014 and the bridge closed to traffic in June – and will remain closed until June 2015, while work is carried out to prevent the spread of an invasive plant species on the riverbank which is damaging the structure.

In addition, the extensive bridge refurbishment consists of replacing the existing deck construction, cross girders, deck plates and fitting new kerbs, along with refurbishing the bridge metalwork and lattice trusses and waterproofing works.

The scaffolding on the 166 m-long bridge is mainly tube and fitting and scaffolding board construction. Xervon provided a special design with flood water protected scaffold towers around the bridge columns in a buttress structure, for the sections going under water. They protect the scaffold from the might of the River Tyne during winter high-water and flooding.

Xervon also provided its aluminium bridging panel beam system to minimise the amount of fittings required, thus reducing the amount of time required to erect and strike the job. This design kept the contract within the cost constraints of the Northumberland County Council and the UK Department for Transport (DfT) budget.

Ovingham bridge was opened in 1883, it operated as a toll bridge until 1944. At which point it was adopted by Northumberland County Council. It has operated with a 3 tonne weight restriction since 1944. Width restrictors were added in the 1970s to enforce this weight limit. It is situated between Ovingham and Prudhoe and carries 4000 vehicles a day over the River Tyne.

XERVON Palmers provided the scaffolding and access for Ovingham bridge for Northumberland County Council on time and on budget.