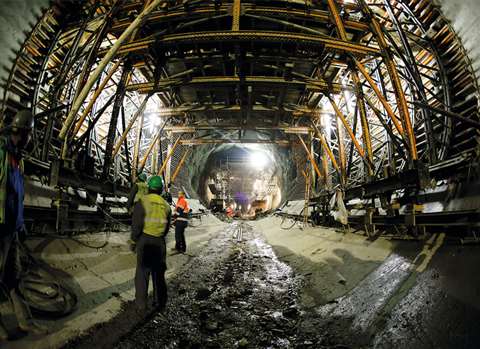 When admiring a finished construction project, it’s often easy to forget the manufacturers behind the innovations which were key parts of piecing the structure together, but which are not obvious in the final work.

And this could be said to be very much the case for companies working in falsework and formwork.

In fact, Jens Lutzow, marketing director of German-based manufacturer Meva, said that 2 to 3% of the cost on a construction job was in the formwork account.

“This may not sound like much,” he said, “but it affects 90% of the construction job, which is in concrete.”

He added that because of this, the company believed it was essential to make the best quality formwork, and that investing in top-of-the-range equipment for this 2% would have a positive effect on the rest of the job.

Such work on construction sites can also affect the time it takes to finish a job, with significant knock-on consequences for other building works.

One company which aimed to ensure time was not an issue was Peri. The company claimed to have provided significant jobsite time savings on the Farringdon Station Crossrail project in London, UK, thanks to its scaffolding solution for the tunnel works.

The project is aimed at providing a quicker and more direct travel route across the capital, and the new railway will be a high frequency, high capacity service linking 40 stations via 21km of new twin-bore tunnels under central London and the Docklands.

To construct the tunnels at Farringdon Station, mobile scaffolding with a diameter of more than 8m was required to enable both waterproofing and spray concrete lining. Additionally, the scaffolding design required access for trucks to enter the tunnel so concrete work could run simultaneously.

Peri said that one of its challenges was to use a castor-mounted scaffolding structure, which significantly restricted the weight available for Peri and the contractor to work with. Also, the requirement for the scaffolding to enable concrete spray lining meant the structure would be too wide for movement along the tunnel.

Peri’s was able to tailor the Peri UP system so it could fit detachable cantilevered console brackets on the edges of the structure to allow waterproofing construction to take place. Once waterproofing was completed, the brackets could also be used for the concrete spraying, which enabled the work to be completed in a shorter period of time for the client.

Another major challenge for Peri was to incorporate the requirement for truck access. The company had to ensure that its scaffolding structure was meticulously designed to ensure worker safety, while also ensuring that it could be supported on the castors. The scaffolding was therefore designed with a passageway through the middle of the structure, which was a UK first for Peri.

The 4.4m high by 3m wide opening enabled the trucks to pass through without disrupting the waterproofing works.

To construct such a huge power plant, Ulma had to mobilise more than 2,000 tonnes of material, for which distribution centres close to the site had to be established.

The project required formwork solutions inside 9km of subterranean galleries, so Ulma adapted standard systems for the varying geometries, with tunnel diameters from 8 to 20m.

To place the rebar and clad the tunnel walls, around 300 tonnes of Brio scaffolding, which also served as gantry falsework, was installed on an MK carriage, allowing it freedom of movement along the length of the tunnels.

For the walls of the plant’s mechanical systems, the tunnel sidewalls, and the lateral beam faces, ORMA modular formwork was chosen, while ATR self-climbing system was used to build the 358m-high surge tanks.

On a very different scale – and proving that formwork can be a truly creative tool – Doka used its Framax Xlife and Dokaflex systems to transform the monolithic Palác Národní building in the heart of Prague, Czech Republic.

Reliefs of hands, shoes, ropes, fabrics, tools and even entire trees – all to a precise specification – were set into the building’s ceilings and walls, from the basement levels, up to the top floor.

As well as its standard formwork, Doka used made-to-measure special formwork from its pre-assembly service to tackle the intricate work. In all, almost 31,000m² of Doka formwork was put into service.

In order to produce a specific pattern in the finished concrete, in certain places the Doka formwork sheeting is removed and replaced with OSB, cement excelsior boards or planed boards. The imprints are created by fixing actual objects as positives to the face of the formwork sheeting. The prepared formwork is sprayed with release agent and the objects are removed as soon as the formwork has been stripped.

The ceilings of the Palác Národní feature unique castings in relief. Doka claimed the fast, hand-set Dokaflex system was ideal for these jobsite parameters. The beams of the Dokaflex system telescope meant the formwork could be fitted neatly to columns and walls. The free choice of sheeting makes this system perfect for widely differing sets of requirements.

Working on another monolithic reinforced concrete structure, German formwork company Paschal put its climbing systems to use on a four-star hotel in Lörrach, southwest Germany.

On site visits, the Paschal technicians noted that almost all of the 75m x 49m construction site was occupied by buildings, with shell dimensions of 68m x 48m.

Consequently, the formwork units of the Paschal climbing system had to be specially designed for the area, as well as to ensure they could be lifted from one level to the next with the smallest number of crane lifts – to a maximum height of 63m.

The build was not without further challenges. For example, the Paschal engineers had to ensure the anchoring system for the climbing platforms did not collide with the attachment points of the façade construction.

To do this, the company said it made anchoring points for the climbing brackets in the reinforced concrete slab level without exception, and made the static calculations for them.

Also in Germany, Peri is working on Henninger Turm – a residential tower being built on the site of an iconic grain silo in Frankfurt.

With a height of around 140m, the new Henninger Turm is one of the tallest residential towers in Germany, with a total of 210 apartments.

In close co-ordination with the project team of construction firm Ed Züblin, Peri developed a workflow concept with formwork, scaffolding and related services.

At 40m high, the tower incorporates a barrel-like construction, positioned above the 30th floor, with an external diameter of around 25m. For the structural work of this very distinctive circular section, a working and scaffolding platform with a cantilever of up to 8m was formed at a height of 100m, on the basis of modular, rentable standard system components.

The Peri concept took into consideration, on the one hand, the required load distribution in the core and external walls for all construction stages and, on the other, provided the assembly and dismantling concept, ensuring maximum safety as a high proportion of the assembly work was carried out on the ground.

To ensure efficient and cost-effective use of materials, Peri said it opted for 3D planning with Peri CAD software, and made use of the project support provided on the jobsite by a project co-ordinator and the availability of an experienced supervisor for the formwork assembly.

As these examples show, the benefits of having not only high-quality formwork and falsework on a project, but also high-quality engineering expertise, cannot be overstated.

An integrated approach to the complex issues involved – including sharing up-to-date information on the formwork construction process and discussing necessary adaptations with colleagues – can have a significant positive impact on cost, construction time, safety and the quality of the end product.

Among new products on the market, Italian manufacturer Pilosio has launched new formwork for walls floors and ceilings, shoring for slabs and scaffolding in steel and aluminium, in addition to the new system for tunnels and viaducts.

In the formwork for walls series, a new lightweight aluminium formwork for the residential sector has been launched by the company, as well as formwork such as Minimag, P300, Magnum Evo in galvanised steel, the Maximix system in wood and Svelt M for curved walls.

The company has also launched a new guided climbing system. The new 240 climbing brackets, the new wind screen protection system and 150 support bracket have been added to its portfolio.

The Mammut XT is based on the Mammut 350 system, and is said to have a load capacity of 100kN/m².

There are no conversions, modifications or add-ons required in switching from one to two sided tying, said Meva, saving time and effort, as the number of parts is reduced by 50%.