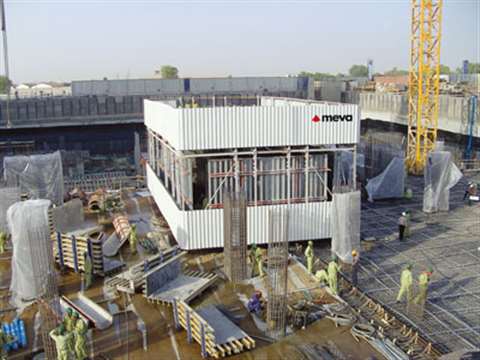 The death of one construction worker and the serious injures sustained by another in January this year after they fell from the 42nd storey of the Trump Soho Hotel, New York, has thrown the spotlight on safety in the high-rise construction sector.

While a safety net saved one man, the death of Yurly Vanchytskyy is the third since 2006 related to concrete operations on high-rise construction sites in New York, according to the New York City Department of Buildings (NYCDoB). Its latest Safety Report Card said that while construction-related fatalities decreased by -43%, from 14 to 8, between January 1 and October 31, 2007, and construction-related injuries stayed relatively constant, up just one to 105, accidents on high-rise construction sites increased, from 23 to 42.

In an effort to prevent fatalities and injuries the city, like many in the US, currently requires contractors to fit two types of net to projects over 23 m or six storeys high under construction. Both are primarily intended to prevent tools, concrete and other debris falling into the street below and injuring passers-by.

One is a vertical, bright orange net that wraps around the building, while the other is a horizontal net that protrudes 3 m around the perimeter of the high-rise structure. Situated no more than two floors below where concrete is being poured it must be raised as the building rises. It was this net that saved one of the men.

However, moving the nets is a cumbersome activity that takes up valuable time. US-based contractors, like others around the world, are therefore looking to find easier ways of protecting their workers and the general public, while at the same time speeding up operations and reducing costs.

"There's no doubt high-rise construction is a dangerous occupation," Jim Hughes, executive vice president, Doka USA, told iC at this year's World of Concrete Show in Las Vegas. "So protecting workers should be a contractor's major concern, one reason we're launching our Protection Screen in the US."

Used in combination with its Xclimb 60 climbing formwork system for "full multi story perimeter protection" on high-rise buildings, the screen protects not just the workers on the project but those below too as it covers three floors, said Mr Hughes.

"Besides which, it also stops falling objects landing on pedestrians on the sidewalk below," he added.

Mr Hughes told iC Doka's Protection Screen and Xclimb 60 climbing system, which were launched in Europe last year, are designed for "ultimate climbing safety". The guided Xclimb 60 system, he added, is always connected to the wall with a self-locking mechanism.

It climbs the exterior of a building with the protection screen allowing easy cycling of slab formwork. Aiding productivity it is offered with two types of trapezoidal metal sheeting - a perforated sheet for warm weather and a closed sheet for colder conditions.

While Doka's system is designed to improve safety and increase site efficiency the two concepts have not always gone hand in hand, according to Dugie Smith, technical director at Ischebeck Titan.

"It wasn't so long ago the mere mention of improving safety on site would have been interpreted more as a barrier to productivity than as a measure that might actually deliver real benefits in efficiency," he said.

However, the justification for the introduction of safety systems, he added, has been the "payback in terms of improved operational efficiency" - lower costs, shorter schedules, faster returns on investment.

Mr Smith explained that the introduction of full height safety screens, such as the company's Titan HV system, or Doka's Protection Screen, around the perimeter of a high-rise structure and track-based vertical climbing formwork, such as its Climbtrac system, have helped increase both site safety and efficiency.

"Our experience shows that a combination of full height screens and an erect/dismantle panel system can achieve production rates of around 700 m2 of slab every four days," said Mr Smith.

Of course safety and productivity are not just issues in the world's more developed construction markets. In the Middle East, where cost is often perceived to come before safety, the influx of foreign contractors is having a major impact on site safety.

"With the increasing number of international contractors working in the Middle East," said RMD Kwikform's engineering director for the Middle East, Russ McNeill, "the issue of health and safety has been raised.

"A lot of high profile sites are now run almost to UK standards, and these standards have gone up over the two years I've been in the region. However, it's going to become even more important as the ex-pat community continues to bring in its own standards," he added.

To this end RMD Kwikform is launching its own screen and climbing formwork system later this year, the Ascent. Available in Europe to start with it gets its global launch later in the year, said Mr McNeill.

"It's designed specifically for high-rise projects, is totally enclosed and acts as a wind barrier that protects workers on site while also stopping objects falling off a building and injuring those below," explained Mr McNeill.

The company has also recently opened a training facility in Dubai. It expects to take small numbers of workers from specific projects through the safe use and implementation of its formwork systems for use on their construction sites.

"It's about raising the profile of safety on site, increasing productivity and making sure those using our systems get the best value and productivity from using them," added Mr McNeill.

While Doka and RMD are in the process of rolling out their safety systems, Peri's Rail Climbing Protection (RCS) Panel has been used for the first time in North America during construction of the Block 24 tower at Toronto, Canada's Concord City Place. The RCS was used for complete wind protection while allowing the use of flying table forms for the decks.

According to Mike Jones, assistant superintendent for contractor PCL Constructors Canada, the combination of these features provided maximum safety without compromising the productivity normally inherent to using table forms for high-rise construction.

"Using the RCS System our workers don't realise how high they were, and with winds of 40 mph (65 km/h) or greater, they felt safe while working. In addition it prevented anything from falling down," said Mr Jones.

There are also other benefits to using such a system, he added. "Because of the system, the heat is well maintained within. Even with freezing temperatures outside, it didn't impact our work. Actually it speed it up, allowing us to be more productive and save on costs."

With a total height of 137 m, construction of the tower, which contains 47 floors and 529 apartments, also used Peri's SkyDeck slab form system for the three levels of underground parking. The SkyDeck system will also be used for the three "non-typical" mechanical levels.

At Block 24 the crane independent RCS system was designed to allow the upper working levels of the climbing protection panel to fold open. This allowed the slab forming tables to be moved out and lifted to the next level.

Like Doka and Peri's systems, Meva's new MAC automatic climbing system also comes with a fully clad and enclosed working area that provides "safe and comfortable working conditions, regardless of the weather."

MAC is an "open end" system that works crane free. It is "pushed" a maximum distance of 4 m by remote control hydraulic rams, which means moving from one level to the next takes about 30 minutes, according to the company.

There are also no guide or climbing rails and the system operates without intermediary anchoring, which, said a company spokesman, makes it easier and faster to use.

Independent structural members installed between the shear key beam and the gridwork support the entire structure, with no reliance on the most recently poured concrete section for support. In this way the jacking beams are supported by concrete that has already set and the structure can be lifted a day after pouring.

Adding to both the systems speed-of-use and flexibility is the fact that both the jacking beam and the shear key beam fit into the same pocket. These pre-moulded pockets, which are fixed onto each new section of a structure's central concrete core, provide the "support positions" for shear key and jacking beams.

They are removable after jacking and can be re-used. This means the top deck is free of jacking masts and other obstacles, while providing space for materials and easy access to the work area. Raising the system is also controlled from this deck.

The "heavy-duty" hydraulic rams, which are placed between the jacking beam and the gridwork, raise the entire superstructure as well as levelling it. The number of rams needed varies with the size and complexity of the central core´s design.

Again, safety plays a key role in the design, with a range of features built into the system, including non-return valves, a complete backup hydraulic system as well as non-return ratchet locks on each ram.

The health and safety of workers on high-rise construction sites around the world remains of paramount importance. An industry that can show it has a safer, healthier workforce is one that will continue to attract new people.

Formwork manufacturers are playing their part in delivering systems that not only help protect construction workers but also increase the speed, efficiency and ultimately productivity of job sites. Surely a win-win situation for contractors and workers alike.