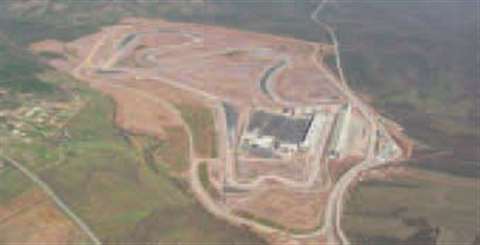 Formula One drivers who have visited the construction site in Istanbul think that they will be able to achieve speeds of up to 350 km/h on the circuit.

The frenetic activity of istanbul's city centre is normally a stark contrast to the slower pace of life in the surrounding countryside, but all that is about to change. Soon the hills to the east of the city will be buzzing to the sound of Formula One cars whizzing round Istanbul's new motor racing circuit following completion of the scheme's fast-tracked construction programme next month.

Turkish contractor Evren has been working almost round the clock since early 2004 on a € 100 million contract to build a new motor racing circuit – Istanbul Otodrom – on the Asian side of Istanbul. Work on the 2,22 million m2 site is now on the finishing straight but at its height Evren's 1450 staff, 27 engineers and 140 pieces of equipment were working two 10,5 hour shifts to complete the project on time.

Constructing this kind of facility in just over a year is a demanding job even in favourable conditions but more than two months were lost due to heavier than normal snowfalls. Evren has had to call on a number of subcontractors to deliver the work on time and this is evident from the wide variety of construction equipment brands and age of machines being used on the site. Alongside backhoes loaders from Turkey's native producer Hidromek are backhoes, wheeled excavators, dozers and graders from Cat, JCB, Volvo, Samsung, Hyundai, Komatsu, Kobelco and Daewoo.

Despite having lost time to bad weather, Evren is on schedule to finish the track in June. On 21 August more than 150000 spectators are expected to descend on the site to witness Turkey's first F1 Grand Prix. Construction of the track has been funded by a joint venture of the Istanbul Chamber of Commerce and the Union of Chambers and Commodity Exchanges of Turkey.

The circuit will be one of three on F1's 2005 calendar that runs anti-clockwise which, combined with the track's numerous bends and gradient.

The final wearing course will be laid on the track just before hand over in June but work is still underway on the service roads and construction of a kart track.

Changes, should make for an entertaining race. The track layout has been designed specifically for F1 use by German design agency Tilke and F1 boss Bernie Ecclestone has been involved at every stage. Nonetheless, the circuit has already been booked as a venue for Moto Grand Prix and the Le Mans Endurance Series as well as a number of domestic races.

But to create the height variation which is a key feature of the 5,33 km long course, Evren had to blast and move 7,5 million m3 of strong greywacke sandstone. “It took 80 separate blasts carried out over three months to excavate all the material but it has all been reused on site,”said Evren project manager Tarik Turan. “Material which was reused for sub base construction was taken to a nearby site for processing using a Nace crushing plant. The rest of the material was used to create banked areas around the outside of the track to provide ‘natural’ stands.”

According to Evren foreign relations coordinator Can Amuraben, most of the investment at the circuit has been in the design and construction of the track itself. “The track surfacing will be 640 mm thick and formed by four layers of asphalt to ensure that it meets the tight tolerances of less than 2 mm variation in level specified by Tilke. The final 40 mm thick wearing course will be laid in June, just before the track is handed over, and will be continuously paved using Vogele paving machines to achieve a joint-free finish,”he said.

The specification for the final layer of asphalt has been designed by Tilke but full details of the mix had not yet been released to Evren when CE visited the site. However, Mr Turan added that the wearing course has been specially design to cope with Istanbul's harsh winters and hot summers, as well as the enormous turning forces exerted by the F1 cars under cornering.

Evren's scope of work also includes construction of all the necessary race circuit infrastructure from grandstands, paddock buildings and helipads through to parking, temporary stands and utilities. “With up to 375000 spectators expected over the course of a race weekend, we have had to install water and sewerage systems which are on the same scale as a small city,”said Evren general manager Can Kalelioglu.

A 5,8 km dual carriageway access road to the track from the nearby Kurtkoy junction on the TEM motorway, which links Instanbul and Ankara, is currently being constructed under another contract. But Evren's contract also includes construction of more than 7,5 km of service roads to create inner and outer ring roads along with two underpasses providing access to the paddock area and three pedestrian overbridges.

The main structures on the site are the concrete framed paddock building and grandstand which sit on opposite sides of the 655 m long start-finish straight.

The 6800 m2 grandstand will have a seating capacity of 25000 when completed and, according to Mr Kalelioglu, nearly all of the seats in this stand for the grand prix have already been sold. The main structure has been cast in situ but the raked seating area has been formed using precast concrete beams which were craned into place. The building will be topped by a cantilevered steel framed canopy with fabric panel to provide protection from the elements.

The three storey paddock building has also been constructed using cast in situ techniques and covers an area of 12700 m2. At either end of the building will be two towers – one will house race control and the other the medical centre – at ground level are the team garages and on the upper floors, between the towers, there will be five hospitality suites.

Fitting out of both buildings is now underway and elsewhere on site there is still plenty of construction activity. Paving teams are currently putting the finishing touches to a kart circuit and a link track which will allow the configuration of the main circuit to be shortened. Gravel traps for the Moto GP, beyond the F1 asphalt run off areas are now being installed along with barriers formed by more than 120000 tyres.

“Istanabul Otodrom will be technically challenging – F1 drivers who have visited the track think that they will be able to achieve 350 km/h on the longest straight,” said Mr Amuraben. “But there is only 150 m between the fastest and slowest point on the track which should make the race an interesting one to watch.”ce