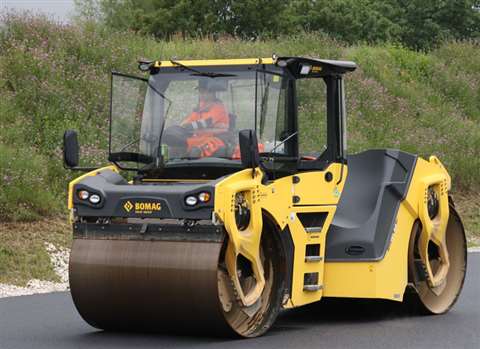 Marini will introduce a new asphalt mixer designed to handle large quantities of recycled aspahlt pavement (RAP) as well as more traditional mixes. A focus of the new six tonne per batch unit is the control of internal emissions, which can reduce the quality of the finished aspahlt, and maintaining rpodcution rates, even though it traditionally takes more mixing time to incorporate RAP.

Marini-Ermont will introduce the RF 160 Neo, the latest in a range of new-generation continuous mix asphalt plants, covering the 80 to 160 tonnes per hour production classes. It features a counterflow dryer drum mixer, which means up to 50% RAP can be incorporated into mixes, and the plant is also designed to be easy to transport.

Fayat’s SAE subsidiary meanwhile will introduce the Packliner Compact continuous asphalt plant for cold mixes. With an output range of 50 to 200 tonnes per hour, the standard unit comes with two feed bins, and a third can be added as an option.

All of the metering units, such as the water, emulsion or cement metering units, in addition to the control and management (automation) cabinet, are mounted on a single chassis. SAE says transportability was a key design consideration, and the plant can be moved on a trailer or in a standard container.

Fayat’s road building equipment subsidiary Bomag will have a variety of new machines on show. Its latest cold milling machine is the 2.2 m working width BM 2000/75. In fact the machine has a variable milling width from 2.0 m to 2.2 m, thanks to Bomag’s Powerdrum.

Tools can be change quickly thanks to Bomag’s BMS 15, which reduces downtime, as the picks can simply be knocked out from behind. The machine also has an integrated dust extraction system.

In terms of pavers, Bomag is introducing models to Europe that it added to its range when it acquired Terex’s road building equipment businesses. The new model at Intermat will be the BF 600-2, along with the BF 223 C und BF 300 P mini pavers.

Bomag’s new articulated tandem rollers are the BW 191 and BW 206, which extend the existing range upwards with a 12 and 16 tonne model. Designed for thick layers and static compaction of open-pore asphalt, the models are available with three exciter systems are available for both models, providing the choice of vibration or oscillation. Bomag’s Asphalt Manager system is a feature as is the Economizer software for measuring compaction progress.

Operators will appreciate the large cabs and movable seat & armrest unit. The cab is also well removed from the engine, which helps reduce the heat and noise for the operator.

The company will also have a new generation of pneumatic tyred rollers at Intermat, which covers the 4.5 to 11 tonne classes. The new BW 11RH-5 features a hydrostatic drive, with five front tyres and four rear ones which means there are no gaps left in the area being compacted.

Bomag’s light compaction range is also being updated for Intermat. The BPR 40/60D reversible plate is new, there will be a the BMP 8500 multi-purpose compactor, which now has the Economizer compaction measurement system on board and the company will also show the BT 60 G and BT 65 G petrol-powered tampers.

Perhaps of greatest interest is the BMP 8500, which weighs in at 1.6 tonnes and offers a working width of 610 – 850 mm. It is unusual to find a compaction measurement system like Bomag’s Economizer on this class of machine as a standard feature. The system helps the operator locate uncompacted areas through a simple system of lights, which also help to prevent unnecessary passes and over-consolidation.

Fayat Group’s foundations equipment subsidiary will feature new powerpacks for vibration applications, such as driving sheet piles. The units now feature an Eco mode, which automatically adjusts engine speed to only supply the power that is needed, based on soil conditions. This means the engine runs at the optimum speed without changing the flow and frequency of the vibrodrivers, meaning the contractor gets obtaining the same performance as usual using less fuel. PTC says fuel consumption can be anywhere from -10% to -35% lower using this system.