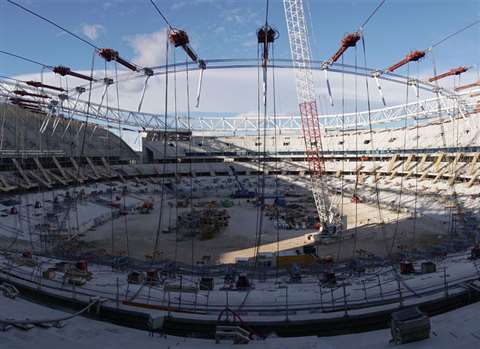 FCC elevating the roof of the Wanda Metropolitano in Madrid

Spanish-based contractor FCC has started elevating the roof of the Wanda Metropolitano, the new stadium of Atlético Madrid football club in the Spanish capital.

FCC said that it differed from other recent European sports facilities, as the modern roof design is formed of a steel structure weighing more than 5,700 tonnes.

It is tensioned with radial cables bound by a membrane that occupies a surface area of 83,053m2.

The roof is an open tensile structure comprising an exterior steel and double height compression ring, an interior traction ring and two sets of radial cables. The roof will shelter the stands, protecting 96% of seats from the rain.

The new stadium is being built by FCC and was designed by architects Antonio Cruz and Antonio Ortiz. It will take up a total surface area of 145,721m2 and will have a 67,000 seating capacity, distributed into stands, boxes and a VIP area. It will also offer more than 4,000 parking spaces.

The distribution of the new seating blocks will bring fans closer to the football pitch, with three new T-shape blocks. They are formed of a lower block made up of 28 floor stands and priority zones, a mid-level block of 13 stands for VIPs with direct outdoor access, and a high-level block supported on a wrap-around building comprising 32 stands. This is where the public enter, and VIP boxes and complementary services are located there as well. An area with 79 boxes has also been built at the lower part of the high-level block.