Fearon looks to the future at IRC 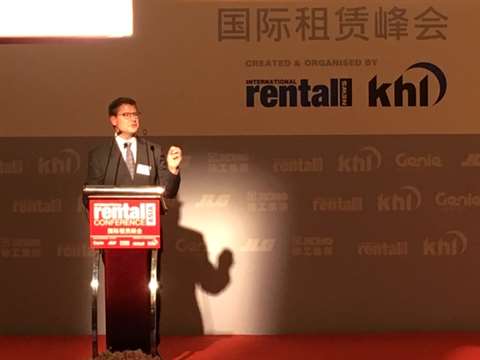 Matt Fearon, president of Genie, spoke about the future technology in the aerial platform industry at the International Rental Conference Asia (IRC), in Shanghai on Monday, and touched on potential MEWP numbers and tariffs.

Last year the manufacturer produced its 50,000th MEWP at its factory in China. Over the next 10 years Genie will produce more than 500,000 machines across its global production plants.

Mr Fearon said, with such high volumes, it is important to produce sustainable equipment. “We should not see machines as disposable.

“We need to extend the life of machines. At some point they will come to the end of their life and they will need to be melted down and turned into something else. As an industry we really need to think about that.”

There are two major drivers when it comes to future equipement, he added, those being safety and productivity.

Safety not only includes factory conditions and working at height but environmental impact too. In the factory safety is driven by anything from improved ergonomics for workers to robotics. As far as working at height is concerned, we will see accessories like secondary guarding devices fitted as standard and a major increase in hybrid and electric equipment. “We will see  an acceleration in the development of these machines,” he said.

For productivity, MEWPs must become telematics enabled, Mr Fearon said, with one of the outcomes being predictive maintenance. “We must use technology to add value. The challenge is in taking information from a machine and making it useful and actionable. What is the real use that will drive productivity in a rental fleet.”

“But there is a lot of data out there and people have difficulty distilling it into valuable data. Some rental companies are doing a fantastic job, but it is not the case for others and, I would say, most in the industry.”

On the subject of MEWP numbers in China. It had been suggested earlier in the conference that the population of working machines could reach one million in 10 years. Mr Fearon said, “the outlook is very positive. Although we are not planning on that level of capacity, it will be very positive for a long time.

Concerning the well-documented trade tariffs that have been placed between China and US, Fearon said, “As a global manufacturer I feel we are in the middle of the those dynamics on tarrifs. 70% of manufacturing is in the US and the impact of tariffs in 2018 have been enormous.

“The team here in China have responded quickly to see how they can mitigate that. We are looking at our global footprint…and overall footprint and our supply chain, although we are not changing our strategy in China.”