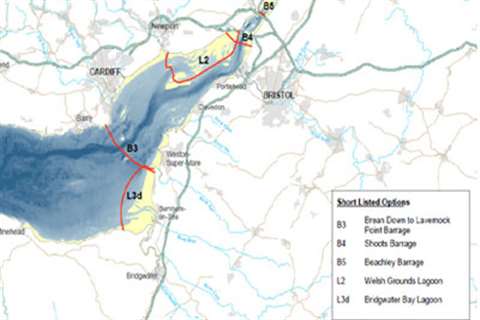 A two-year feasibility study by the UK government's Department of Energy and Climate Change (DECC) has come down against the mooted UK£ 34.3 billion (€ 38.8 billion) Severn estuary tidal energy scheme. The project was fell fowl of environmental concerns and its cost effectiveness compared to other sources of renewable energy.

At 14 m, the Severn estuary's tidal range is one of the highest in the world, and its potential as a predictable source of renewable energy has long been seen. Indeed, it is estimated that a tidal barrage could supply up to 5% of the UK's electricity needs.

Of the five schemes considered, the largest, a UK£ 34.3 billion (€ 38.8 billion) barrage between Weston-Super-mare in England and the Welsh capital, Cardiff was considered the most cost-effective. The smaller UK£ 7 billion (€ 7.9 billion) Shoots barrage further upstream was also considered feasible, as was the creation of a UK£ 17.7 billion (€20 billion) tidal lagoon in Bridgwater bay.

However, after considering the five most feasible schemes, the DECC concluded there was too much cost and risk to the public sector, although it added that based on a 120 year lifetime tidal power schemes in the Severn could be cost-effective. It also said that the barrage could not be completed before 2020, a date the government has set to generate 15% of the UK's energy from renewable sources. As such, the case to build the barrage to help meet this target was undermined.

Environmental concerns centred on the salt- and mudflats that would be destroyed by the barrage, threatening the habitats of 30 bird species. Fish populations were also expected to suffer if the barrage were to go ahead.

Although the report means the Severn Barrage has been put on hold for now, it did leave the door open for the scheme to be revisited in the future, perhaps in light of the target of cutting UK greenhouse gas emissions by -80% by 2050. "The government recognises that factors which will determine the feasibility of Severn tidal power could change over time," said the report.