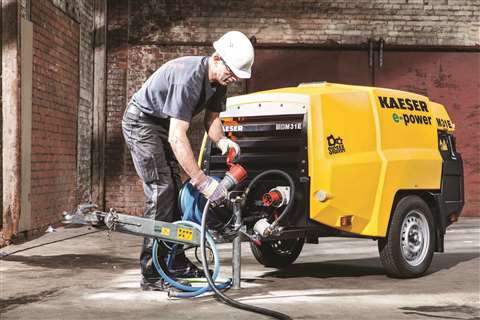 The UK and France are the most mature rental markets in Europe, according to Alex Persyn, product marketing and service director at Doosan Portable Power, who said the company supplied portable compressors to many rental companies across the region.

“The rental concept itself is nowadays common across Europe – the rental account customer base as such is very diverse, a mixture of large and small direct accounts and rental operations through dedicated dealers,” he explained.

“There is no one-to-one relation between a specific compressor model and an application. There are a multitude of potential applications, with small or large size projects requiring different size compressors. However, what all users look for is simplicity in usage, reliability in operation and accessible in service,” he explained, adding that Doosan worked hard to produce units that retained their residual value too.

“The introduction of the various engine emission Stages through the full range, requires major efforts and as a responsible manufacturer we are in the forefront of the drive toward a clean environment,” Mr Persyn said.

“Currently, there are new planning restrictions in certain cities, implementing use of newest compliant machines but little or no incentives to support customers to invest in the latest technology. While clean machines contribute to a greener world, they do come at a substantially higher cost.

“Electronics are not always popular but with the arrival of new engine technology, an inevitable step, which we turned to advantage helping the customers to control the machines more efficiently.

"The introduction of AdBlue on the larger compressors as part of the emissions clean-up, is a positive fact. However, while urea has been used for years in the transport sector, it is still fairly new for a construction site, adding to the logistical challenges of our customers," he explained.

“Looking to the future, the last planned step in engine development to Stage V will bring the cleanest engines. More than a 100-fold decrease in particle and chemical emissions over several stages, which will be applied to an even wider range of products, including smaller compressors (variable speed) and the complete range of generators (fixed speed machines).”

Mr Persyn explained that feedback from rental operations does inspire the latest designs. For instance, he highlighted the dual-mode models – offering increased availability and opportunity to match the right model to the right place, and potentially reducing the number of transports between depots; boosting utilisation rates. He also highlighted its new proprietary airends – key components that the company can now ensure are offered at its high quality standards.

The initial product offering consists of the DSN275, DSN686 and HR350 airends. The HR350, for example, will be available in the new Stage IV -compliant 25/330 (XHP1170-T4F) air compressor and as a drop-in replacement for the previous HR2.5 airend fitted in the older compressor models and drill rigs.

“Volume and pressure are the two most important attributes of any air compressor or drill rig, and the Doosan HR350 airend offers a highly efficient rotor profile that produces greater cfm output with less horsepower, resulting in lower fuel consumption compared to previous airends.

“In addition to lower fuel costs, the HR350 also reduces the potential for downtime with strengthened internal castings that eliminate cracking and flexing, ultimately ensuring a longer machine life.”

As well as being sturdily built internally, compressors on construction sites, like generators, need to have tough frames.

The new Doosan range of high ambient portable compressors are built to withstand hard knocks, and also come with the option of a bunded base, ensuring all operating fluids stay within the compressor.

The company said these small compressors are designed for a range of applications, including powering breakers and tools in road repair, demolition and refurbishment.

The 7/53 HA portable compressor is the latest addition to the range, in the Stage IIIA category. It supplies 5.0m3 and is powered by a four-cylinder mechanical turbo-charged Yanmar liquid-cooled engine, producing 36kW of power.

The compressor comes with a range of running gear options, or a permanent metal support, if equipment is to be truck mounted.

All the Doosan compressors in the high ambient range include free air deliveries and have a rated operating pressure of 7 bar. Each also has the option of an integral 6kVA generator, which increases the machine’s flexibility by supplying electrical output in addition to compressed air.

Fuel efficiency is another important consideration when choosing a compressor and Atlas Copco’s XAS 185 features a fully automatic regulator that constantly varies the engine speed according to air demand, which minimizes fuel consumption.

With its 90 litre fuel tank, the compressor can keep running throughout a full eight-hour shift without the need for refuelling.

As well as Atlas Copco’s HardHat canopy, made from durable weather-resistant polyethylene (see box story), the XAS 185’s exterior parts are made of a powder-coated steel for corrosion resistance. Michael Sagermann, Atlas Copco vice president, business lines manager, portable energy, said, “We strive to develop equipment that is among the most efficient in the industry, from the engine to maintenance. This not only makes the XAS 185 ideal for contractors, but also rental centres, where high utilisation and fast ROI are key.”

Atlas Copco bought the company through its Quincy Compressor business, also based in the US, and said that it would be integrated into this division following the deal.

Scales Industrial Technologies is located in Carle Place, New York, and operates in the Northeastern region of the US.

The company has about 180 employees and its business is focused on distribution, service and rental of compressors and air treatment systems for use in such areas as manufacturing and construction.

Meanwhile, safety is another priority for equipment such as compressors, and the US firm Jenny Products has been awarded the Underwriter Laboratories (UL) designation for safety standards across its full range of electric motor piston air compressors.

“It takes significant investment and effort to be UL Listed, and receiving approval from both UL and CSA is a proud milestone that speaks to the inherent safety of Jenny air compressors,” said

Daniel Leiss, president of Jenny Products. “This pushes Jenny to a safety standard not found with most compressor manufacturers.”
Jenny offers two compressor/generator combination models, providing both portable air and a power source in one versatile machine for a variety of industrial, construction and do-it-yourself applications.

Each model also includes a 3000W, 115V/230V generator, providing a convenient solution for powering electric tools, lighting or other jobsite equipment, or as a backup power source during instances of power failure.

The compressor/generator units are offered with 17 gallon (64.3 liter) air tanks and boast lifting handles integrated into opposite ends of the compressors’ frames, as well as pneumatic tyres.

The compressors are belt-driven with a large flywheel for easy start-ups and extra cooling, and a directional air shroud helps further reduce pump temperatures. Special unloading valves on the compressors also assist in engine starting.

Also new on the market is the M125 portable compressor from Kaeser Kompressoren, which is smaller and lighter than the popular M130, but has a new variable pressure feature, allowing it to be operated between 7 and 14 bar at any time.

The compressor features a diesel particulate filter as standard and a low emission Deutz engine, making it a solid choice in low emission zones.

With stationary and mobile models in the range, the M125 is also available with a 13kVA or a 23kVA generator. When combined, the compressor’s integrated Sigma Control offers dynamic delivery control, automatically adjusting maximum compressed air delivery, according to how much electrical power is required.

And Kaeser also introduced three ‘e-power’ electric drive compressors this year – the M27E, M31E and M50E models, which provides flow rates of between 2 and 5m3/min for pressures between 7 and 14 bar. Kaeser said the new units are quieter than the diesel equivalents and cheaper to operate, because energy and maintenance costs “are generally lower”.

The e-power compressors – available in both stationary and road-going versions – are said to be well-suited for use in city centres where reduced noise is important, and for work within buildings without emissions. The three new models add to the existing, small, electrically powered unit, the M13E, which has been available for some time.

Meanwhile, Sullair said it would soon be introducing its new 185 International portable air compressor to customers in Canada, Mexico, most of Central and South America, the Middle East, Africa, and Eastern Europe.

Featuring a 49hp (36kW) 2.4L Tier 3 Kubota engine, the company said the redesigned compressor will offer improved serviceability and efficiency. Most notably, the updated unit will feature a new direct-driven air end with no gear losses, which will improve fuel efficiency by 15-20%. Additionally, it will offer a larger fuel tank for longer runtime and galvannealed steel clam-shell canopy for increased durability and improved serviceability.

The company has also announced the availability of two updated Tier 4 Final emissions compliant portable air compressors. The Sullair 185 T4F is in full production and ready to order, and the company is currently taking preorders for the Sullair 375 T4F.

Over the past year, Sullair has put the 185 T4F through rigorous in-field testing and internal evaluation to ensure the final model meets the highest of standards.

The improved 375 T4F air compressor offers a more compact design, better serviceability, and a higher range of pressure (375 to 425 cfm air flow and 100 to 200 psi), allowing for more flexibility on job sites. It also features the Sullair air end and a larger fuel tank for longer usage.

“We listened to our customers’ wants and needs, incorporating a variety of valued feedback into the new design,” said Stefan Brosick, Sullair vp of marketing and sales. “We analysed every part of these machines to make them stand out as the best in the industry.”

This is a feature from the September/October 2016 issue of IRN. To read the full article, with extra images and information, subscribe to the magazine: http://www.khl.com/subscriptions/magazines/international-rental-news/