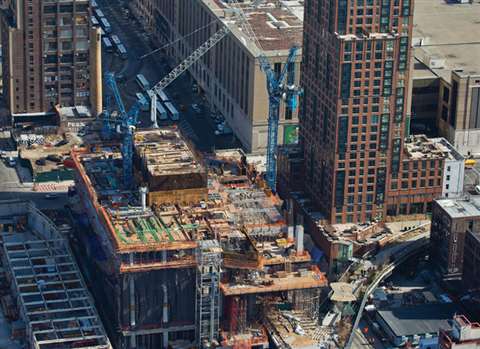 The Hudson’s Yard project in New York uses Ulma formwork. It is one of the largest schemes of its kind in the US.

The improving picture in many areas of the global construction market has seen ever-more complex schemes get underway.
So ensuring the delivery of these projects to precise specifications, agreed budgets and timelines has influenced the range of falsework and formwork solutions being offered.

Advances in modular formwork panelling systems featuring pre-assembled elements have been designed to aid workflow for project site managers are one response.

This is in addition to developments such as computer-based management of formwork, warehouse supplies and building materials, which are increasingly being used on projects and make difference to the financial viability of schemes.

As Ian Hayes, division operations director of RMD Kwikform said, there is now a greater sense of positivity from many companies in, “A market that has been changing as economic recovery begins.”
So far this year, RMD Kwikform has been tasked with supplying a number of large projects.

This includes providing material for a joint venture between Leighton-John Holland and Nishimatsu Construction working on an extension to Hong Kong’s MTR metro railway line.
The HK$ 1.8 billion (US$ 232 million) South Island railway scheme is being built to improve transport links to the southern end of Hong Kong, which does not have any rail service.

As part of the project, Leighton-Holland is working on the Lei Tung and South Horizon stations and its associated tunnels, while Nishimatsu Construction is building the railway tunnels between the Admiralty and Aberdeen stations.

Rory O’Gara, senior project engineer from RMD Kwikform, described it as among the company’s most challenging projects.
He said, “This is the first time ever we have used our Ascent climbing formwork in a tunnel application. Previously it has been used in high-rise commercial or residential buildings so this project was a global first for the product.

“Having looked at the job itself, which was to construct a shaft lining in the tunnel section, we liaised with our global design teams for a solution that was both inherently safe and capable of improving cycle times on the site.

“We would not have initially thought of the Ascent system for this project, but because it can be pre-assembled in our yard, we were not only able to offer an innovative new solution to the challenge, we were also able to reduce labour costs significantly.”

In the Middle East, RMD Kwikform has found its services equally in demand. One of its biggest projects has involved working with Besix Orascom on the 162,500 m2 Mall of Egypt in Dubai, UAE.
Described by its developers as a “five-star supermall,” it includes plans for an indoor ski park – which proved a particularly demanding construction task.

Engineers on the project decided against using traditional timber wedges and steel slope slab for the skiing facilities.
Instead, they used a rapidshore tilt head, which gave the precise support required for the commission.

For the building’s 12.4 m tall inverted pyramidal piers, which started at 2 m x 2 m and then grew to more than twice that level, engineers designed a special corner arrangement, joined to the standard primary “superslim soldier” beam.

The company’s regional sales manager, Mohamed El Gammal, believed the project had been a considerable success. He said,

“For a large scale project of this type it is all about safety, speed and simplicity.

“By working with the Besix Orascom joint venture team at the early stages of planning, we were able to identify and source the right amount of equipment needed for the project, in addition to engineering safe and timesaving solutions.

“On any project of this scale, we also recognise the benefit of providing onsite support and guidance, which in our experience dramatically improves efficiency and safety onsite.”

One company that has been especially proactive in streamlining its processes is Paschal, which has been working on how digital technology can enhance its services.

Among its most successful products has been the development of its planning and warehouse management computer software Plan-light (PPL).

This allows contractors to create complete formwork plans that can monitor the entire process of installing formwork. With the latest version of its Plan Pro AutoCAD design software, the placement of individual formwork panels can be pre-determined to assess potential challenges of any given project.

Such computer-based techniques, in combination with new products such as a dismantling inside corner post for use with its Logo steel-based wall formwork, has, says the company, been well-received by the construction industry for its time-saving during the dismantling phase of a scheme.

Underlining its commitment to advanced research and development, the company has just finished a new feasibility study on advanced formwork in Denmark. The work, which was done with a group of 14 partner organisations, examined the potential use of robot-assisted construction methods.

It was demonstrated through creating a striking 24 m long, 6 m high sculptural installation in the city of Aarhus.

As part of the study, a robot supplied with CAD computer design milled the upper mould of the polystyrene blocks for the sculpture. The structure was then supported by Logo formwork, proving successfully that robots could work accurately on designs off-site alongside construction teams.

Dealing with the challenges of testing terrain is something Doka is particularly used to. One of its latest projects has seen it undertake the building a bridge for Estonia’s second largest city,

Tartu, as part of the area’s major road infrastructure upgrade.
For the first time in a Baltic state, the company used a cantilever forming traveller to place the 55 m mid-section of the 400 m bridge of the city approach road requiring a crossing at the Emajogi river. It was not possible for the river to be damned or diverted, hence the cantilever solution.

According to the company, its innovative construction approach had proved effective in delivering the project that was carried out by K-most contracting team under guidance from Doka formwork engineers. The project is expected to be completed next year.

With projects operating in a number of locations across Europe and further afield, Doka has had a particularly busy year.

It has acquired the Australian company Grocon and also the patent for Lubeca Jumpform automatic climbing formwork, which it is intending to be used in the rental sector for a range of construction projects in emerging countries.

The use of climbing formwork has also played a key part in the building of one of New York’s largest developments of the past two decades, known as Tower C.

Formwork supplier Ulma was appointed the contract by American contractor Tutor Perini for assistance with a US$ 600 million 157,935m2 skyscraper project.

It is part of the Hudson Yards regeneration scheme, which its developers claim is among the largest project of its kind ever undertaken in the US.

The major task of developing 17 million ft2 (1.6 million m2) of commercial space will include creating five office towers, a total of more than 100 shops and restaurants and 500 properties.

Tower C has four lift shafts that require the use of an ATR self climbing wall formwork system with MK Structures and Megaform formwork during the 20 month construction period.

According to the contractor, the lightweight design of the formwork enables manual assembly of large structures.

Consequently, this ensures that cranes are used more sparingly for lifting of structure sets previously assembled on the ground, which can bring about benefits in productivity and flexibility.

Another company making a strong name for itself in supplying formwork for challenging sites with unusual designs is Alsina. It has completed one of its most striking projects to date, working on the BBVA headquarters in Madrid.

The Barcelona-based business took on the project designed by architects Jacques Herzog and Pierre de Meuron, which is known as “La Vela” (The Sail).

It is designed to accommodate 6,000 employees and has received an investment of € 900 million (US$ 1.17 billion).
It consists of a series of buildings, streets and linear gardens that unfold like a carpet that fits the existing topography, and has been executed in two phases.

The first phase included the implementation of two horizontal office buildings, with basements. Tackling the curved wall of the building was solved through using Alsina’s T1C climbing system.

This one-sided climbing formwork equipment has been developed to ensure a safe working environment in handling unconventionally-shaped buildings.

As well as dealing with complex designs, many construction projects are assigned with tight deadlines for completion.
This was case with one of Peri’s most challenging schemes this year – providing scaffolding solutions for a new university campus in Lima, Peru.

Located in the southern district of Barranco, the new site for Universidad de Ingeniería y Tecnología (UTEC) has been designed with 10 upper lecture floors.

Its design is based on a large arena, with the north end of the building having a reverse-inclined outer façade with the effect of a steep cliff. The south side was also a complex construction with a height of nearly 50 m cascading down to a series of steps.

According to the company, this kept crane usage to a minimum for shuttering walls, and also enabled fast forming times.
For areas of the building with reinforced concrete walls, the team used Vario GT 24 girder wall formwork and a climbing formwork system.

Multiflex girder slab formwork was also used to create grandstand-style staggered floor slabs, which were a key part of the design. These high loads were transferred over several storeys using Peri-Up scaffolding techniques to complete the job.

Providing cost effective and creative construction solutions is at the heart of TMS formwork’s approach to its business.

The company has supplied a number of complex structures (including the Al Rajhi Bank in Riyadh), as well as key building, tunnel and bridge projects in Iraq, Russia, Libya and Brazil.

TMS has worked closely as a distributor for Upm/Schauman, Sah and Kaufmann for plywood, tie-rod, rebar couplers and timber beams. Its steel-based formwork components are manufactured at its facilities in Izmit, Turkey.

With companies such as this and many others across the global construction market registering an upturn in their workload, the construction sector is showing strong signs of improving.

This has prompted valuable innovations from formwork and falsework supply companies, which have risen to the challenge of incorporating key technology advances into their product designs.