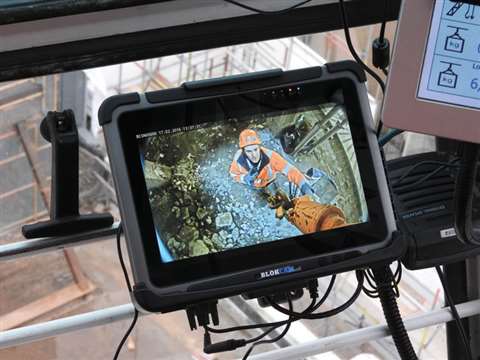 The view on screen from a hook-mounted camera

Major advances in crane load view cameras and vision systems technology over the last couple of years open up a whole new range of possibilities for the safety and efficiency of crane operations and integration with the wider job site. Katherine Weir reports.

Using cameras on cranes can extend an operator’s field of view to allow them to see what is happening to a load in a position that is otherwise impossible from the cabin or other control station.

Whether the view presented on a screen to the operator is a close up from the hook or a wider image of the entire job site, the safety and efficiency benefits can be considerable.

USA-based Netarus names its most popular load view camera models as the HC140 low profile HoistCam and the HC180 armoured dome HoistCam. They can both be mounted on a wide range of cranes and have applications in construction, marine and industrial worksites.

Chris Machut, chief technology officer at Netarus (the company that manufactures and sells HoistCam), says, “Blind lifts are no longer blind to the operator, improving safety and efficiency on any worksite. The HC180, with its armoured dome, can withstand shock up to 20 times the force of gravity and is ideal for providing durability and reliability - even in remote areas.

“For locations where the more popular HC180 may not fit, the HC120 mini wireless camera provides vision for blind lifts on tower cranes, telescopic boom cranes and overhead cranes.”

Netarus also describes its products as “industrial-grade, making them among the most rugged unmanned monitoring devices on the market.”

Camera system manufacturer Orlaco, based in the Netherlands, has developed a new high definition product line that allows for a higher resolution image. The company explains that even the smallest details are clearly shown on the monitor. Orlaco also offers tthernet technology with its cameras to give wireless connection for transmission of the image.

Linda van Dijk at Orlaco says, “We have cameras to fit different jobsite applications as well as crane types. The CornerEye system delivers a field of vision of 270 degrees, ideal for mobile cranes with the camera mounted on the blind side of the truck - also for crawlers for a complete rear view.

“For cranes operating in the offshore industry or in explosion risk areas, we have explosion proof cameras. Certified to be installed in danger zones 1 and 2, and 21 and 22, the cameras are resistant to extreme temperatures from -40 to +75 degrees Celsius (°C) and are completely watertight with no maintenance.”

The latest camera from Orlaco is the shock-resistant ethernet camera with 100 megabytes per second (Mb/s) connection. EMOS is suitable for use in extreme conditions on trucks, cranes, heavy construction and mining equipment, the manufacturer says.

Wireless crane camera system manufacturer BlokCam in the United Kingdom has been adapting its designs to become lighter, smaller and more compact overall on the hook block. The company said that it is also focusing on the lorry loader crane sector with a new range of systems following requests from original equipment manufacturers (OEMs) in this sector.

In terms of acting as more than just visual aids for operators, manufacturers are finding that these devices offer a variation of applications.

Peter Hird, BlokCam co-founder and joint managing director, says, “Apart from this being a visual aid for the crane operators, we are now using all the data from the systems to investigate accidents, near misses, create 3D-imaging of the site and so on. We are now streaming live images through our office link antennas direct onto office screens and, in some case our systems are working alongside the site security systems, where they recorded all the footage from the BlokCam.”

Netarus explains that developments in software and analytical systems is demonstrating how companies can harness the collective capacity to not only provide a monitor, but also to run a business or site operation safely and more efficiently.

“With the advancements in camera sensitivity, it is possible to keep eyes on a job site, to quickly and remotely identify important safety practices and even prevent unsafe activity from causing harm,” says Machut. “The ability to capture, evaluate and share data in near real time is increasingly becoming a better way to do business.

“Customers will increasingly be looking to use unmanned camera assist systems, complete with remote monitoring and analytics to integrate with other critical programs, such as occupational safety monitoring or tracking man hours,” Machut continues.

The i4507 was released earlier in 2016 by crane monitoring systems equipment company Rayco-Wylie. It is part of the company’s i4500 range designed for tower cranes. Using a high definition colour screen, the system displays load, safe working load (SWL), slew angle, trolley radius, hook height, hook speed, wind speed and the views from up to four cameras.

The system can also interface with the crane’s remote control system and an anti-collision device. Manon Huard at Rayco-Wylie says, “Cameras are not just a trend but also an integral part of the safe load indicators offered, improving safety and productivity.”

The company says that the system is compatible with the main camera manufacturers on the market. In case of incidents, Rayco-Wylie’s i4500 data logger (combined with camera information) is an “indispensable tool” for evidence in the event of accidents or other incidents.

Speaking about the EMOS camera system, Orlaco asserts that the camera can be used for various applications, including object detection, remote vision and control, image recognition and image stitching (joining images together to create a large scene or panorama). It also states that this camera could be vital in achieving an ultimate goal of driverless crane operations. The camera is available with angles of view at 180°, 120° and 90°. Models with 60° and 30° angles of view will be introduced to the market later in 2016.

Crane manufacturer Liebherr’s crawlers have a rear facing camera to show the counterweight and a there is a camera to the right of the cabin to cover the swing radius. In addition, there are a couple of optional cameras, for example, the camera at the boom head (motor zoom camera) and a camera showing the winches.

USA-based Link-Belt has winch cameras, swing cameras and rear-view cameras as standard and offers product-specific cameras, including the right side turning camera on Link-Belt truck cranes and all terrains.

Pat Collins, Link-Belt director of product marketing, says, “When in a tight jobsite and with the cab tilted, for example, being able to see in obstructed spots, is important for everyone and provides the operator more time dedicated to ‘eyes on load’. Difficulties aren’t much of an issue as long as you do your homework in setting the specification for your camera and monitor; identifying technical performance issues like low light resolution, environmental effects and monitor performance.”

Sennebogen offers a standard camera package of a rear camera, a right side camera and a seven inch colour screen to give a better overview and higher safety, the German manufacturer says. It says that one of the difficulties of using these cameras is appropriate lighting but it offers LED lights to try to help this issue.

Hoist cameras that replace the rear view mirrors that were once used, plus reversing cameras and boom head cameras (including zoom types) are used by Manitowoc, as are “any other specially designed camera requested by the customer” the company says.

The latest development in this field for Manitowoc was introduced at April’s Bauma exhibition in Germany. “Our 270 degree bird view camera system offers a clear top view around the crane,” says Andreas Cremer, Manitowoc global product director for all terrain cranes. “It’s also a good indication of when to steer when manoeuvring on site.”

Tower crane manufacturer Wolffkran uses BlokCam and describes the experience as very positive so far. Dave Holder, HTC Wolffkran director and general manager, discusses the difference between what customers are saying they want versus what they are actually ordering for their cranes. “After initial activity, where everyone said they needed a camera, we are currently deploying around a dozen or so,” he says, “However, we have yet to see the uptake that was first anticipated.”

Drum cameras to allow observation of rope spooling, hook load cameras (attached to show the load from the top) and rear and blind spot cameras on the carrier are offered by Terex.

Klaus Meissner, director of product strategy at Terex, says, “Benefits of using cameras include improved safety - as long as the number of screens to be observed is feasible - avoidance of costly rope changes (as any issue with spooling would become visible immediately), and the ability to easily monitor the area behind the crane even without a supervisor present.”