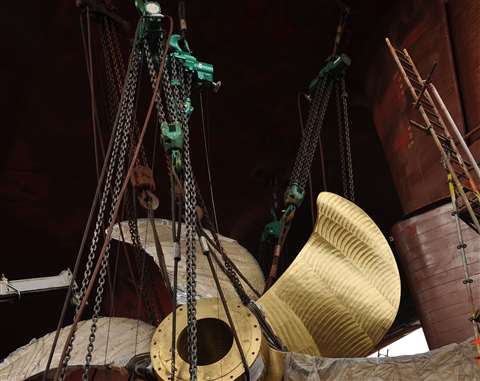 For the first time in Europe LGH Hijsmaterieel BV (LGH) in the Netherlands is offering two 100 tonne capacity pneumatic chain hoists for rent. The hoists, which boast a lifting height of 18 metres, were acquired at the end of 2015.

LGH said that they are the only hoists with this combination of capacity and lifting height available for rent on the European mainland, with LGH being the first company in the world to possess more than one hoist of this power.

The company said it purchased the hoists, made by JDN in Germany, in response to rapidly growing demand for heavy lifting gear, especially in the offshore industry and in shipbuilding and maintenance.

In addition to the new heavy hoists, LGH has also acquired two additional 60 tonne hoists and upgraded two of its existing 50 tonne units to 60 tonnes capacity.

The 100 tonne hoists weigh 2 tonnes without the chain. Components such as rudders, screws and anchors are growing in both weight and size. Assembly and maintenance of ships often cannot go without the heaviest classes of lifting gear.

Ben Vermeer, managing director at LGH in the Netherlands, said, “We decided upon this purchase when a number of French shipping companies came to us looking for 100 tonne hoists.” After a search Vermeer concluded that almost no company in the world possessed such hoists.

Vermeer continued, “Since heavy gear is very expensive, it is often not profitable for businesses to purchase it themselves. Hiring such gear is usually a cheaper solution for them.”