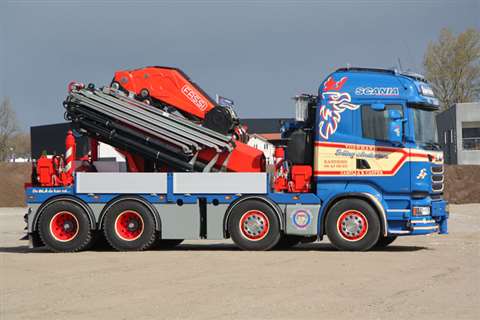 Erling Andersen’s Fassi F1950RAL articulated crane is fitted on a R490 8x4 Scania truck. It has a work angle of up to 80 degrees

Erling Andersen has taken delivery of a Fassi F1950RAL articulated crane. The model is the first one to be delivered to Denmark.

The F1950RAL has a rating 137.6 tonne-metres and a secondary boom with a reach of 41 metres. With additional attachments, the maximum reach is 50 m. The crane is fitted on a R490 8x4 Scania truck and has a work angle of up to 80 degrees.

“It is also fitted with a stability control function which uses sensors to monitor the angle of tilting and, based on outrigger set-up and load on the hook, automatically stops the crane before it can move into an overload situation,” the manufacturer added.

The F1950RAL is in the 32 tonne type-approval category, allowing it to drive on roads without restrictions. In total, around sixty F1950 cranes have now been delivered around the world, Fassi said.

Casper Anderson, part owner of Erling Andersen, said, “We operate all over Denmark with our cranes. Buying this vehicle was a major investment for our company, but it is quickly paying for itself because of the speed at which we can carry out jobs.

“The equipped vehicle has a total weight of 31 tonnes but thanks to the limited weight of the crane I was able to fit a comfortable and spacious cab,” Andersen added. “But it is the compact assembly that allows me to reach practically anywhere, even the historic city centres. I think that the Scania R490 8x4 that I chose is ideal for pairing with the Fassi crane: it has a pitch of 4,300 mm, a six-cylinder 13-litre engine and 490 hp. This Scania is ideal to team with the Fassi F1950RAL and, in particular, with the integrated sub frame on which the crane is mounted.

“This base was made entirely by Fassi at its Italian factories but its configuration was an integral part of the crane supply contract. This allowed us to customise it for our own needs, to have every single detail where I wanted it to be. This sub frame assembly is completely independent from the vehicle frame, thus guaranteeing that no abnormal tensions or stresses are transferred to the vehicle that could compromise its service life or efficiency. It is a solution that makes it possible to use normal production vehicles with no special equipment.”

One of its first jobs was in Aarhus, a town on the eastern coast of the Danish peninsula of Jutland. The crane was used to install balconies in an inner courtyard. In less than half an hour the first of the two balconies was installed, a spokesperson said.

“The speed of operation is one of the greatest advantages of this crane,” Andersen said, “and this allows me to operate without causing too much interference to traffic, without creating problems for the residents of the building and without having to apply for special permits.”

The crane was supplied to Erling Andersen by distributor Fassi Kranes Aps, based in Denmark. Gert Rasmussen, owner of Fassi Kranes Aps, said, “The supply of the Fassi F1950RAL to Erling Andersen is an excellent example of how we like to operate. We gave the customer the freedom to choose the truck they liked the best, since no particular characteristics were required. With other options they might have had to focus more on the construction to get the weight down, fitting a smaller cab and several light alloy details. The F1950RAL crane is also notable for its smaller dimensions in the transport position, a result of the particular geometry that allows a reduction of the overall size. This gives more space for equipment and accessories around the subframe. All of this has helped us to best meet Casper Andersen’s needs. He is very satisfied and we are even more so!”