First in, last out: skid steer loaders for the demolition sector 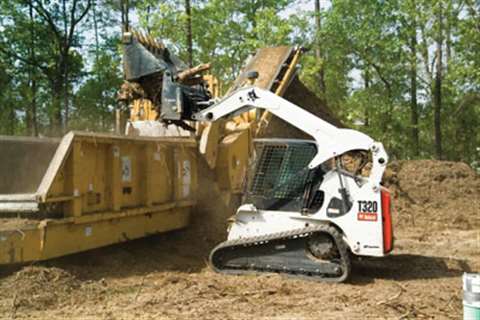 The new T320 compact tracked loader launched by Bobcat is designed for increased productivity and greater attachment performance, according to the company.

In 2007, the total worldwide market for skid steer loaders reached just under 90,000 units but according to the latest figures from Off Highway Research, equipment sales will not be as high this year. Despite the current slowdown in the USA, equipment manufacturers have said they expect the overall market to be flat in 2008 rather than experience any major decline.

Todd Dohnal, international sales manager for Mustang Manufacturing and Gehl Company, said the compact equipment market is increasing ‘dramatically’ in Asia, South America and the Middle East. He said the growth rate of compact equipment has increased in the last 12 months in South America, including countries such as Argentina, Chile, Colombia and Venezuela, and currently stands at 23% compared to the same period last year, with skid steers seeing the most explosive growth.

He added that the company expects to continue to see these markets increase over the next few years. The Mustang brand has been well received in Australia, and in South Africa preparations for the 2010 Football World Cup is also providing good business.

Jim Hughes, brand marketing manager for Case in North America said 2008 is going to be challenging for skid steers with industry numbers projected to be down. “We (Case) are projecting our market share to grow … but the industry volumes are projected to fall,” he added.

He said the compact tracked loader market has grown at a more rapid pace than the skid steer market because they are relatively new machines.

“People are only just finding out what that machine can do for them and so there has been some significant growth over the last few years.”

Todd Lynnes, supervisor for Caterpillar commercial marketing, echoed these sentiments. He said during the last five years one of the trends in the US market has been the growth of compact tracked loaders.

“This is because of the versatility these models offer. They are able to work in soft underfoot conditions and the amount of traction and stability you are able to get with these machines allows for more control, more digging performance and more up-time,” Mr Lynnes said.

But it is not just North America that is seeing the benefits of tracked versions. JCB’s Paul Hoptross product marketing manager – compact equipment, told D&Ri: “One trend we are seeing in Europe is the advent of the tracked machines that are gaining a bigger share of the market as people come to realise that they are a better solution in some applications.”

He went on to say that in general, the skid steer is being viewed in a somewhat different light: “People are beginning to recognise these machines as being skid steer tool carriers rather than just loaders. The manufacturers have done a good job in producing a wide range of attachments for these machines.”

Heavier skid steers in the US market are another trend, Mr Lynnes added. “People want more performance, more horsepower and higher rated operator capacity because they want machines that can do more with more power to run big hydraulic tools,” he said.

The heavier end may also become a target for JCB in the future. According to Mr Hoptross: “The largest machine we currently produce weighs 11,500 kg (25,300 lb). In North America, there is a propensity for big machines, so there is a possible opportunity for us there.”

The slowdown in the US market has affected everybody in the sector, according to Mr Lynnes. “But I think there are still growth opportunities for Cat’s products in this market – especially when you look at the versatility of the machines - people are still finding new uses for these machines because of their work tools and attachments.”

Marty Miller, global product manager for Bobcat compact excavators, said tracked skid steer loaders are ideal for working on varied ground conditions and where extra floatation of the tracks is needed. “The weight of the machine with its tracks on the ground allows for more pushing power and more digging performance - and, if you are using a bucket, - more loading performance,” he said.

Mr Dohnal said, “Mustang has stayed fairly small over the years - the 614 to 748 kg range has primarily been our dominant size class for our company’s skid steers. Now we are just starting to see that market get a little bit bigger - the 900 and 1200 kg class is getting a little stronger. It seems as if the knowledge of what these machines can do is getting out there.”

Mr Hughes said skid steer loaders are very popular in the US residential and commercial construction markets, the agricultural and landscaping sectors as well as for road and bridge construction and utility work.

“The diversity of the attachments is what really what makes these machines so popular on all jobsites, Mr Hughes said. “They are versatile, have a small footprint and therefore great maneuverability.”

Meanwhile, he said compact tracked loaders are mainly used for landscaping, residential construction and utility work as well as being popular in the rental market.

In a move that is part of JCB’s move to cover the demolition sector, the company has introduced what it claims to be the only skid steer available from an OEM that has been specified for the sector, the Series II Robot 160 XD. Under development for the last 12 months, and the result of considerable customer input, the new machine boosts a number of features that tailor it for the demolition role,

According to general manager - waste, recycling and demolition, Jonathan Garnham: “we have got much closer to the demolition market and our understanding of that market has improved considerably. We see the Robot skid steer design, with its single arm and side entry, as being a very safe and very useful product for this market. With that in mind, we have been working on is to produce a machine that is specifically aimed at demolition.

Paul Hoptroff said: “Typically what will happen is a demolition contractor will buy the best machine he can get and start to build in his own guards, protection etc. However, we recognised the potential of being able to offer a skid steer with all that done at manufacture – things like wide core radiators are easy to do in the factory, but changing a radiator can be very expensive in the field. A hinged bumper to provide rear protection is also very useful. We also install FOPs, front protection, axle cutters, four lifting hooks on the roof, light guards, heavy duty air cleaners and solid puncture proof tyres. So we cover the whole gamut and it is there in a standard XD package. Other options are available – the XD specification includes those features that JCB has identified as being those most commonly fitted.”

Mr Garnham amplified this: “It is much more economical to have these things fitted by an OEM than it is as a aftermarket exercise. The customer is able to start work on day one – he does not have to put it into his workshop. All the guards are naturally JCB approved, it has been fully tested by us and the dealers have all the parts.”

Initially, one JCB Series II Robot model will be available with the XD specification, the Robot 160 XD. Mr Garnham said: “The Robot 160 is dimensionally the smallest and the lightest of the machines we produce. This means it can easily be used inside and outside buildings. It offers the lowest floor loading and its lightness also means it can easily be lifted to upper floors. We will enter the market with this model and see what happens.”

Mr Garnham told D&Ri that the new demolition-specific machine is available through any JCB dealer in any part of the world.