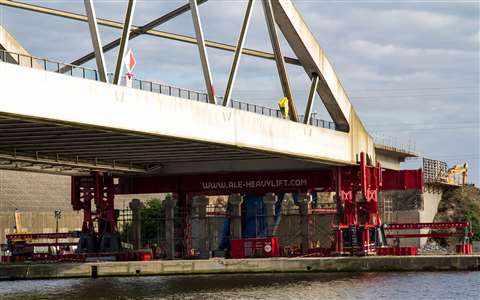 International heavy lift and transport company ALE has used the Mega Jack system for the first time in Europe as part of the Albert Kanaal Project in Belgium.

The Mega Jack system, said by the company to be engineered to push structures of staggering weights and sizes, was used to jack up the main bridge as part of a project to raise its height in Genk, Belgium.

The main bridge, with a span of 180 metres and a weight of 4,500 tonnes, along with the two side bridges, weighing 536 tonnes each, were jacked up 2.9 m in three consecutive days, the company said. The client then adjusted the foundations and finished other civil works over the following three weeks, before ALE jacked down the main and the two side bridges on the adjusted foundations.

The height allowance of the bridge for ships to pass under was increased by 2.4 m.

Jos Baelemans, project engineer, said, “One of the challenges was to use a computerised jacking system with a jacking accuracy of +/- 0.3 millimetres and a read out accuracy of +/- 0.01 mm. Furthermore, as the bridge foundations were located close to the quayside, a system was required with a high jacking capacity and a small footprint.

“Given the extreme weight of the bridge, we believe the optimum solution would be to use our Mega Jack system. This jacking system comprised eight jacks, each with 1,300 tonnes capacity, thus creating a total lifting capacity of 10,400 tonnes. By using the Mega Jack, we could complete the jack up quickly and safely within the space available.

“For both side bridges, a computerised jacking system with a total of 2,000 tonne capacity and oversized steel beams was used, which allowed for the bridge to be jacked up on all 14 bearing points simultaneously.”

The bridge heightening is part of the Albert Kanaal Project, in which over 50 bridges will eventually have a free passing height of 9.1 m to allow ships with four courses of containers to pass through the channel. Some bridges need to be completely replaced, other bridges only need to be heightened and some bridges already have the sufficient height, the company said.

ALE has also been awarded the contract to launch the new bridge at Zolder, weighing approximately 1,200 tonnes. This bridge is also part of Albert Kanaal project and will be launching later in 2016.