A new hoist from Geda has been used for the first time in Helsinki, Finland.

The new generation Multilift P18 person and material hoist, first shown at bauma 2019, is based on the orginal version introduced in 2007 and has a completely updated design. It offers two platform lengths, 3.2m and 3.7m, allowing easy transport for bulky construction materials. 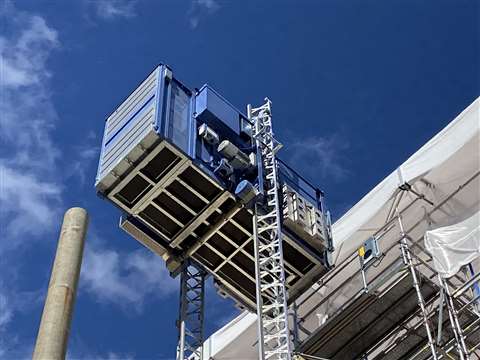 The 3.7m version, with a load capacity of 2,000kg is used at the Finnish construction site, where loft space in a major residential building in the heart of Helsinki is being turned into apartments. The metal roof will also be fully refurbished.

Construction company Skanska Rakennuskone is carrying out the work on the building, which has an installed height of 21m, and chose the Multilift P18 for the job.

As part of the redesign of the car interior, the control unit of the switch box and assembly guard have been recessed and integrated to ensure there are no protrusions. The extension has been placed on the A-side of the car. To keep wear on the gear rack and pinion as low as possible, the model is equipped with a new lubrication pump, which is included as standard. 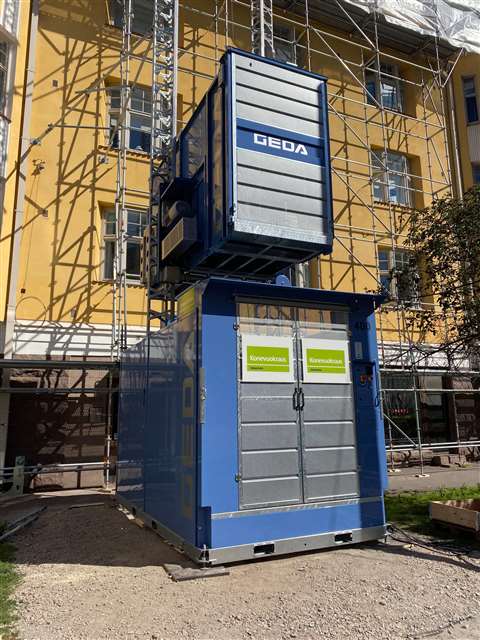 Depending on the construction site conditions or customer requirements, power consumption can be influenced by reducing the load and/or speed so that a 32 A connection will be sufficient instead of the standard 63 A connection. This opens up a significantly broader range of applications for the hoist.

Instead of two car switch boxes previously, one large box is now used, while a completely revised innovative control system ensures greater ease of operation. In addition to this the much wider assembly plank allows improved accessibility during assembly. All wear parts are quickly and easily accessible.

Lifting speed of the new model is 40 m/min, while the Uni-X-Mast is used as the mast system, which was also presented at bauma 2019 for the first time and replaces the Uni-Mast system.

The new P18 has successfully passed its first test at the Helsinki construction site. Florian Draxler, Geda regional sales manager for Scandinavia, said, “The positive feedback from our customer Skanska Rakennuskone shows that the second generation of the Geda Multilift P18 meets the demands of the market, allowing us to create customised solutions for our partners worldwide.”