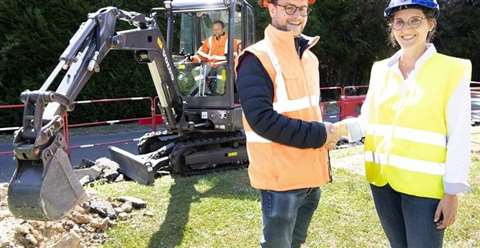 The machine, an ECR25 Electric, is a compact excavator in the 2.5 tonne range and has been provided to the firm as part of a customer trial phase.

The ECR25 Electric was unveiled at Bauma 2019 where Melker Jernberg, president of Volvo CE, said that Volvo was looking to create the electric market. “We really believe in this,” he said. “We believe that the technology is now mature enough.”

With zero exhaust emissions and quiet operation, the Volvo ECR25 Electric has been selected for digging trenches at the Saint-Nom-la Bretèche golf course, just outside of Paris, France. 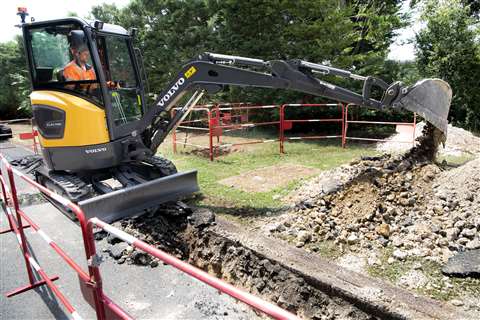 “It’s in a very quiet and peaceful area where residents want that quietness and peacefulness to be respected, so it’s crucial to have a machine that meets this need.”

Benjamin Silvent, site manager for Spac said, “For residents and cities in general, it makes our worksites more acceptable because it limits carbon emissions and noise disturbance.”

Communication when using the machine is also easier between workers. Alexandre Birot, a machine operator for Spac said, “When we talk to the guy in the trench we don’t have to yell, we talk normally and he can hear everything. With a traditional excavator we first have to turn the engine off for him to be able to hear.

“What’s more, when we spend the whole day in the trench, usually he would inhale a lot of fumes but now there’s no exhaust gas for him to inhale. If there were only electric machines in the company that would be amazing.” 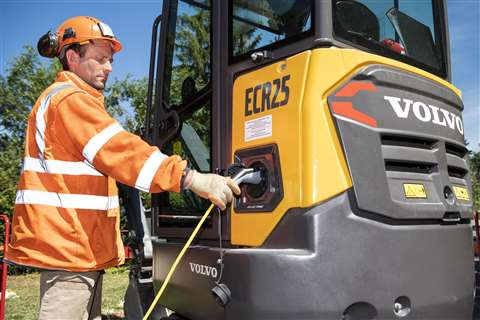 The Volvo ECR25 Electric replaces the combustion engine with 48-volt lithium-ion batteries and an electric motor in order to power the hydraulics and move the machine.

According to the company, the batteries store enough energy to power the machine for eight hours in typical applications, such as utility work.

An onboard charger enables overnight charging via a regular household plug socket. A fast charging option, requiring more powerful grid access, will be made available in the future.

Increasing numbers of construction equipment manufacturers are now producing – or in the process of producing – electric equipment.