Flourishing in the southeast 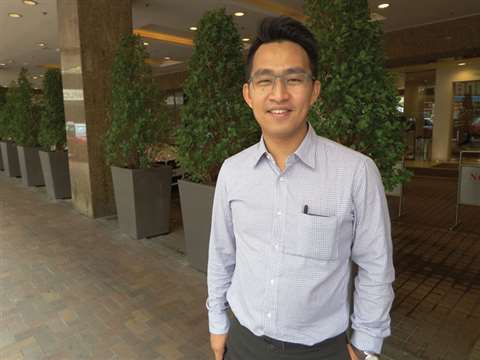 Malaysia is a fascinating market when it comes to AWPs, with truck mounts dominant in the country for now, but booms are starting to show their metal. AI spoke to two representatives from the industry there.

In one respect, Malaysia sums up the South East Asian market for AWPs, in that it is predominantly a used market. In another respect it bucks the trend of most other countries thanks to its reliance on truck mounts over self propelled booms, a cultural phenomenon that seems likely to continue in the short term but it may find it hard to resist the more mainstream boom in the future. AI spoke to two pioneers of the AWP sector, Johnson Lai, with a truck mount background and Alex Tan, who has boom and scissors experience.

Johnson Lai is the assistant manager at truck mount specialist Keng Guan Skylift, based in Malaysia. The business was started by his father, originally as a crane rental and repair company, then some 20 years ago he saw an opportunity for aerial work platform in the country. “Nobody was providing lifts for rental, instead a lot of people were modifying cranes with a bucket and sending that out for rental,” explains Mr Lai, “but if you got caught doing that you wold get a fine.”

Keng Guan Skylift started with a 20 m Aichi truck mount, and then moved up to a 39 m working height machine, which was the biggest truck mount in the country at the time. Now the company has a 72 m Bronto Skylift S72 HLA, with a majority of the fleet being from Aichi, Tadano, Bronto Skylift and South Korean brand Horyong. The latter produces a comprehensive range of telescopic truck mounts up to 70 m and is dominant in the South Korean market but exports very few, particularly outside of Asia.

According to Mr Lai, there are many small truck mount rental companies with one or two machines, but less than 10 larger rental companies and less than five with up to 30 units. Mr Lai says the country’s government Department of Occupational Safety and Health (DOSH), calculated in June 2014 there was 5322 MEWPS registered in Malaysia. This includes truck mounts, scissor lifts and booms. At a guess Mr Lai puts the number of truck mounts in the country at roughly 3000 units.

Up to 99% of those machines, across all types, are brought into the country as used equipment, with many of the truck mounts being 15 years old. “This is one of the opportunities for our company. Three years ago we brought in the first brand new truck mount in Malaysia for the rental industry. So we have the advantage over other companies because we are the first to offer brand new,” says Mr Lai - that being a 27 m Aichi SKY27A introduced in 2012. “Now we are increasing our fleet of brand new equipment as there is more demand, as regulation is getting tight.”

Keng Guan Skylift now has 10 new units in its fleet, those being 27 m machines from Aichi and 45 m units from Horyong, and plans to increase that number in the near future. “Some projects, particularly government projects, now require machines less than 10 years old. Private projects can be less strict but it depends on the company; if they are from Japan or South Korea, for example, they have very strict safety regulations, so require a newer machine,” explains Mr Lai.

A major project, requiring many truck mounts, is the 40 km Mass Rapid Transit (MRT) system being built in the capital city of Kuala Lumpur.

There are a number of reasons why the truck mount is dominant in Malaysia, says Mr Lai. Firstly, there are relatively great distances between the cities, accompanied by high transportation costs, along with the fact a culture has grown up over the years meaning customers have got used to using them.

Mr Lai does see increased competition from other forms of AWP, namely boom lifts but doesn’t feel too much pressure. “I think the number of booms and scissors are increasing. Before, no companies were bringing in these machines, and they did not know about them. But now we have the choice, but I feel that people will still choose the truck mount. “We are finding competition with the boom lift but we still have the advantage because of the culture of this country; it is used to truck mounts because it comes with an operator. With a boom lift they have to do it themselves and they are a bit scared of that.

Certainly the company has no plans to introduce boom lifts in the immediate future, although it could happen a little further off, says Mr Lai. “On the rental side we know that the truck mounted machine will be used safely because we supply an operator.”

As a whole the situation in Malaysia is positive with rental rates at a good level thanks to the MRT and light rail transit (LRT) projects underway at the moment. “The demand is very high and so the rates are good this year. The project will last for three years and is using a great number of our platforms. “When the work finishes it will be a major problem for all the rental companies. I think the rental rates will come down – I don’t want to think about it.” That said, it’s possible other MRT projects will follow in the country.

Nevertheless, investment is part of the company’s future, with the bigger truck mounts set to be introduced into the fleet. One of those will be a Bronto in the region of 90 or 100 m working, although it won’t be a new machine this time.

Alex Tan is also based in Malaysia but his experience is scissors and booms. Mr Tan has been in the industry since 1999, starting with a JLG distributor, before moving onto a Genie distributor, followed by Haulotte. In 2004 he founded PMB Access, which started as an aluminium scaffold manufacturer for local and overseas markets, then got involved with AWPs in 2008.

“We manufactured aluminium scaffolding in 2004 and expanded the sales network throughout South East Asia and in 2008 we started investing in powered access. After that we started with a rental fleet of 10 units increasing to about 115 units in four years to 2012.”

They were scissors to start with and at that time we were the only ones buying brand new machines for the fleet. Most of the players purchased used equipment from Europe. My opinion is a little different and I started with brand new machines.”

Mr Tan left the company last year at which point it had 115 new machines and an IPAF training centre set up by him in 2011. Concerning the rental market for booms and scissors in Malaysia, Mr Tan confirms it is a predominantly used market. “If you base it on statistics from USA customs, it shows that every year about 100-110 brand new units go into Malaysia. If you compare that to used units, there could be three to four times more.” Right now in the country there are a handful of big players with 300 to 350 units in their fleets. “But we have a lot of small companies with less than 100 units.”

The proportion of scissors in the market is about 85% to 90%, says Mr Tan, with the rest being booms. One of the reasons there are so few booms is that, as we have heard, Malaysia is a truck mount market.

How does Mr Tan see the future of booms in Malaysia? “I feel very positive about the growth of the boom lift, together with scissors as well.

“Between 2008 and 2014, the Malaysia scissors and booms rental industry has increased its rental fleet tremendously, and reached more than double figures since 2008.”

There are even some new players in the market which have diversified their business from general rental, including cranes, to truck mounted platforms. “Quality of the machine and service will become a major concern of the contractor and end user. Malaysia authorities will start taking precautions to reduce the accident rate on work sites, which will increase due to the rising number of scissors and booms in the market.”

Mr Tan adds the implementation of new rules and regulations in the country could take some time, he believes with the assistant from existing bodies and co-operation from all parties, the era of scissors and booms will begin relatively soon. “Right now in Malaysia there is an operator shortage generally and so it’s difficult to control or handle the operators because there is no training. Therefore Mr Tan adds, “Nowadays a lot of the players investing in booms are from crane companies. Singapore, the USA and Europe sell their fleets after six to seven years and they go to the Southeast Asia market and the crane companies are now turning their attention to AWPs because they want to cut down on operators.”

As we have learned, there is no requirement for training in Malaysia. The only regulation in existence is a government policy stating all lifting equipment must be inspected every 15 months. Having a used equipment market, adds Mr Tan, means the rates are naturally lower. “With used units from Europe and the USA they can provide cheaper rental, which does help increase demand due to the lower rate.” Projects for booms include Petronas BASF in Kuantan, Kuala Lumpur International Airport 2 in Sepang, the Hershey chocolate factory in Johor and a HINO Motors factory in Seremban, among others.

“If you look at data from the government it really shows that the quantity of booms are increasing because more and more local investors start to think about moving from cranes into the booms or scissor industry, to bring down the operator costs. For them it looks to be a good business.”

Mr Tan adds, “So, a lot of crane companies are starting to invest in 20 or 30 units of used AWPs. Also, when the numbers of boom lifts and scissors increases, the rates go down and this produces a very good environment for the end user to have more cost effective use of equipment. When this happens and the quantity increases in a short period of time, a lot of new players come in to the industry and a lot of new end users will have their first trial of booms and scissors. Now here comes the compromise: safety, because there are no trained operators of AWPs.”

Despite this, Mr Tan says safety has improved greatly in the last three to four years thanks to big government projects, like the ongoing MRT, which insist on a certain amount of safety criteria being met.”