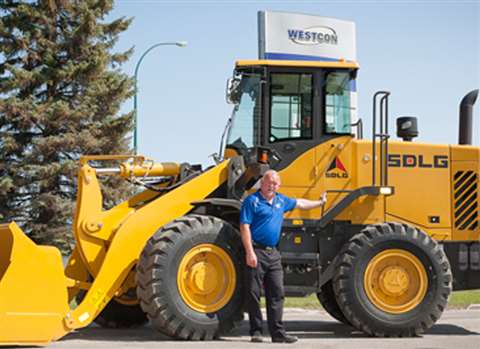 Todd Dokken, sales manager at Westcon Equipment and Rentals, with the SDLG LG938L.

It said the new locations were through Strongco dealership branches in Montreal and Calgary, and through dealer Westcon Equipment & Rentals in Winnipeg, with an Ontario location on the way.

SDLG said it had received a positive reception in the region since the first wheeled loader it sold in North America was purchased in Canada in early 2014.

Al Quinn, director of SDLG North America, said the addition of Strongco and Westcon would strengthen the company’s presence in Canada.

“The success of SDLG will only be as strong as the network of dealers we have selling the wheeled loaders,” Mr Quinn said.

“With Strongco and Westcon coming on board, we’re ensuring that Canada will have seasoned, expert dealers that will take great care in knowing both the product and its ideal customer base.”

“We feel that SDLG wheel loaders are a great value for the selling price,” he said.