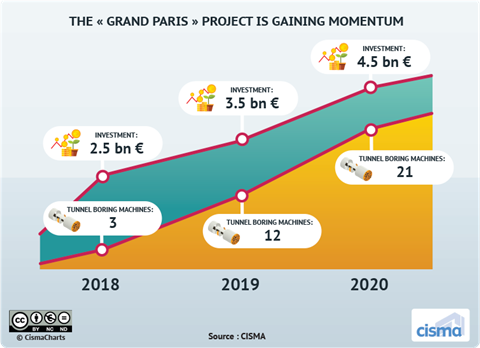 The uplift to what is already the largest public transportation and infrastructure project in Europe is set to continue into 2020, with some €4.5 billion investment forecast, amounting to a further 30% increase.

The transport link at the heart of the project, the Grand Paris Express, will comprise four new fully-automated metro lines, plus extensions to existing lines, as well as 68 new stations. In all, some 200km of new railway lines will be laid.

Currently, however, the project has just three tunnel boring machines (TBMs) in operation on the south track of line 15. The new investment will see that increasing to up to 12 machines in 2019, with a forecast 21 TBMs set to be in simultaneous operation by 2020.

The latest figures come from CISMA, the French association of equipment manufacturers within the construction, infrastructure, steel and handling equipment industries, whose graphic shows the extent of the forecast uplift to the project.