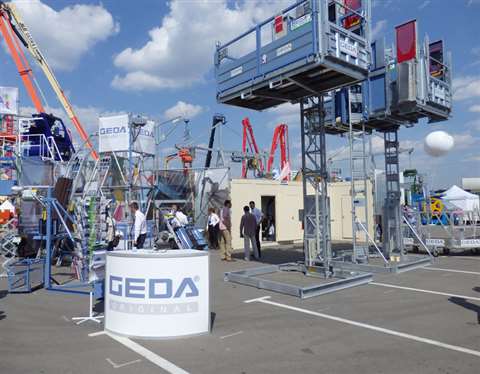 The Geda stand at the CTT show in Moscow.

Geda premiered a variant of its Era 1200 Z/ZP transport platform at the CTT show in Moscow, Russia.

To meet Russia national safety regulations, the new version of the Geda Era 1200 Z/ZP can be fitted with a roof and protection grid underneath the hoist car. As standard, the one-mast transport platform has a continuous 1.4 m x 3.2 m C platform and a 1500 kg capacity. It can be continuously opened and loaded on the C side, which the company said is a benefit when transporting bulky materials.

Concerning the exhibition, which took place 3-7 June, a Geda spokesperson said, “The international character of CTT makes it an ideal springboard for accessing the target markets of Russia and Eastern Europe and it also serves as a business platform for information exchanges and worldwide collaboration.

“Geda understands the importance of being close to its customers. The establishment of both Geda Major in Istanbul in Turkey at the end of 2012 and of the company's own subsidiary in Moscow in 2008 created the framework for the company to provide targeted services to these markets."