Gnat-modified Brokk at work in Leeds 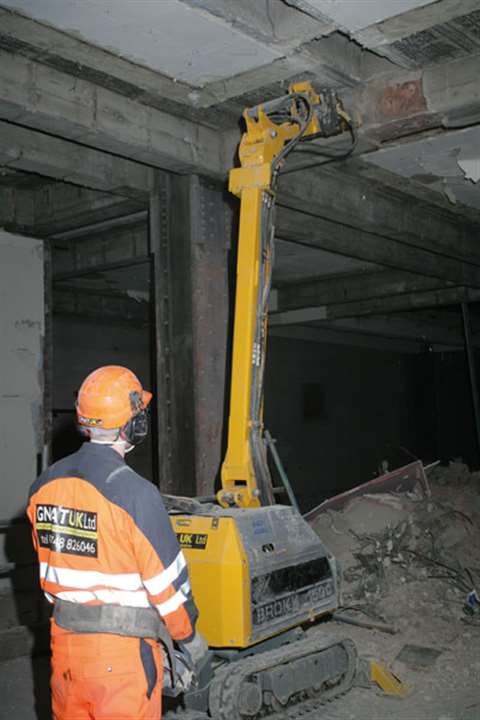 Innovative yet simple modifications to a small lightweight robotic demolition machine is offering the main contractor on a complex building refurbishment scheme in central Leeds, UK, a win-win solution. Using the robot to break out 70 year old concrete floor slabs, and form several thousand small steel beam connection pockets in the concrete, is claimed to be safer and twice as fast compared to any other method possible.

“This intricate demolition work is on the overall project’s critical path and we originally thought it would all have to be broken out by hand” explains Adam Knowles, project manager for main contractor Wates Construction. “But now I am a big fan of this clever little machine and we would certainly use it again on other difficult access jobs.”

Currently centre stage in the £40 million (US$78 million) Broad Gate retail and office development is a seemingly standard Swedish built Brokk 150C robot. But owner, robotic specialist Gnat UK, has customised it for the Leeds job by extending the boom with a 1 m (3.3 ft) insert and attaching to its end a lightweight, more powerful, breaker.

“We believe this is the only robotic machine in the UK capable of meeting this project’s weight restraints, long reach and cutting power demands” says Gnat project manager Mike Hill. It is a claim endorsed by his client, as Gnat’s contracted workload has now increased threefold from the original tender figure.

Last year Wates Construction took over the building, for client Capital and Counties, to totally strip out the interior, break out floor slabs and strengthen sections of the steel frame with new cross beams. To create four large retail units, plus four levels of office space, two new floors are being added, a large central full height atrium cut out and at least a dozen stair, escalator and lift shafts created.

On a number of occasions, using the customised Brokk, the 9 m (30 ft) square slab sections within the steel frame have been demolished from the immediate floor beneath. But these floors can take an overall machine loading of just 1.5 tonnes and, to reach the slab above, demands a cutting boom at least 5 m (16.4 ft) long.

Add to this brief a building still 75% enclosed, plus a construction workforce peaking to 150, and the sustained use of fume-belching diesel or petrol powered demolition machinery was a definite no–no.

Hand held breakers, with crews working from scaffolds or aerial work platforms, seemed the only practical option. But demolition would have been slow; while the volume of cutting needed raised both health and safety issues over the possibility of vibration white finger or falling debris.

Standard lightweight robotic machines had neither the reach nor strength until Gnat, already familiar with the project through earlier staircase removal enabling works, decided to build a suitable hybrid.

The North Yorkshire based specialist has one of the UK’s largest, most versatile, range of manual and robotic demolition machines. Its fleet is headed by a dozen Brokks, ranging from 0.5 tonnes to over 3 tonnes.

Company technicians took a couple of its 1.5 tonne Brokk 150Cs, welded in a 1m

(3.3 ft) boom extension, lengthened the appropriate hydraulics and added a lightweight, 80 kg (180 lb) breaker, uprated to offer 400 joules percussion power - near double the punch for a hammer of this size.

This solved weight, reach and power demands; while the ability for the operator to stand up to 10 m (33 ft) back from the machine - yet still offer precision concrete breaking - offered extra brownie points for safety.

Such accuracy is crucial when breaking out over 1,000 pockets in the concrete-encased steel beams. These 400 mm (16 in) square holes allow additional steel beams to be secured to existing joists, reconfiguring the steel frame to accommodate new slab openings.

“We can cut out over 40 pockets a day compared to around just six by hand” claims Mr. Hill. “And we can demolish an entire 9 m (30 ft) square slab section at least three times faster than manually.”

To change floor levels the versatile Brokk simply walks itself up the building’s existing old stairs - which the machine then later demolishes if needed. Tight manoeuvrability makes the robot ideal for accessing awkward stairwells and the contractor is programmed to remove some 10 staircase flights throughout the building.

Gnat’s recently extended 18 month contract is due for completion late this year. By then the two machines should have demolished over 3,000 tonnes of concrete flooring, beam protection and staircases.

“No other machine was capable of offering us such a safe and fast method for forming the exposure pockets” concludes Mr. Knowles. “This machine really has answered all our prayers.”