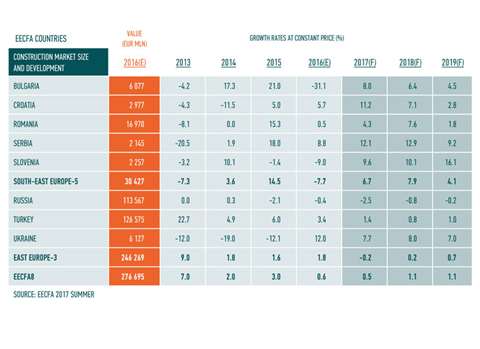 It said that the region was leaving behind a transitory 2016, when the absorption of funds available in the new EU programming period from 2014 to 2020 was still at a low level. The next few years are said to be characterised by expansion greater than GDP, with building construction predicted to outperform the total market, with a yearly average rise of 9%.

The small growth in the region’s total civil engineering market is being attributed to negative expectations in Romania.

The eight countries covered by EECFA are Bulgaria, Croatia, Romania, Russia, Serbia, Slovenia, Turkey and Ukraine, and its summer construction forecast was released on 16 June.

In the three Eastern European markets covered by EECFA, a scenario of no further market expansion is considered the most likely. Turkey and Russia, the two biggest markets by far covered by EECFA, are expected to show some similarities. In both countries, the forecasts are described as moderately optimistic in the civil engineering market. In the building construction market, the outlook is said to be clearly negative for Russia and neutral for Turkey.

In Ukraine, the recovery experienced in 2016 is expected to be sustained until 2019. Both building construction and civil engineering could expand further at a relatively good pace, EECFA said.

Looking at Serbia, predictions for the construction market have been revised upwards slightly against the 2016 winter forecast, confirming the trends in construction volumes.

EECFA said that the permit reform started in 2015, in particular, had been driving a new boom in building construction. This, combined with historically low interest rates, rising earnings and the improved financial conditions in the country, was making Serbia one of the main engines of economic growth in the West Balkans, it said.

Therefore, the outlook was the second most optimistic in the South Eastern Europe region with 11% annual average growth for the 2017 to 2019 period.

Expectations for the construction market in Croatia are now even better than in the winter 2016 forecast, with a projected 11.2% growth this year, a 7.1% rise next year and a smaller, 2.8% increase in the year after.

The bright spots were said to be that the country’s economic indicators were promising, and Croatia was getting better at applying for EU funds both at central and local governmental levels. Also, Croatia’s tourism sector is likely to keep expanding.

A negative factor hindering development might, however, be the ongoing Agrokor crisis – Croatia’s, and one of South East Europe’s largest conglomerates is facing bankruptcy – as EECFA felt that if it were to be mishandled, it could damage both the economy and the construction sector considerably.

The Slovenian construction industry was hit by bankruptcies of major construction firms and the deceleration of large-scale construction projects as a result of diminishing EU funds at the end of the EU financial period in 2014. It is expected to have registered a contraction of 9% in 2016. 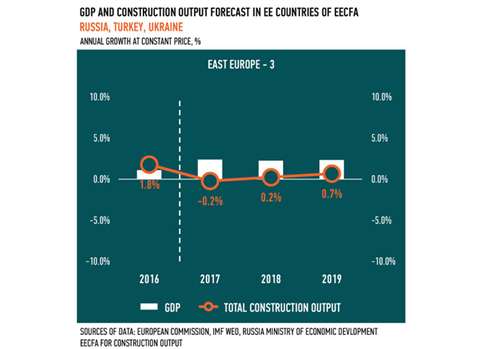 However, EU funds from the current financial period of 2014 to 2020 started to flow in by the end of 2016, and high-volume projects that were at a standstill are now gaining momentum through ownership restructuring. As these restructured projects will be initiated in the period from 2017 to 2018, construction in Slovenia is likely to see a hike of 9.6% this year, and even bigger rises in 2018 and in 2019 of 10.1% and 16.1%.

The Romanian construction sector is set to have posted a lower-than-expected expansion in 2016, said EECFA.

In comparison with the country’s whole year growth of 3.7% hoped for in the EECFA Winter 2016 Report, now only a 0.5% growth is estimated for last year. This is because of the underperformance of the civil engineering subsector thanks to a sluggish uptake of EU funds.

Nevertheless, EECFA said that the Romanian construction market might expand this year, at 4.3%, taking into account better-performing housing permits and state subsidies supporting the housing sector.

In 2018, a 7.6% increase should take place, it said, while in 2019, growth should decelerate to 1.8% given that the residential market expansion was expected to slow down.

Bulgaria seems to have registered a bigger slump in construction output in 2016 than the one predicted last winter.

Currently, a major decrease of 31.1% is estimated to have occurred in the sector in 2016, compared to the shrinkage of 18.5% expected at the end of the year. EECFA said the reason for the downward revision was a considerably greater drop in the civil engineering segment owing to slower-than-expected absorption of EU funds, and with virtually no big-league projects contracted last year.

In 2017, however, a rapid recovery is set to come, it said, with the return of EU funds in the civil segment, with the growth in the residential subsector backed by the low interest rate environment for mortgages, and by decreasing jobless rates.

In Eastern Europe, after eight years of an almost uninterrupted downward trend, 2016 was the first year for the Ukrainian construction sector to witness a revival. Output is expected to have recorded growth of 12% last year, higher than the 7.3% predicted in the winter 2016 EECFA report.

Non-residential construction and civil engineering fuelled the market last year, coming from extremely low levels between 2013 and 2015. This spring the Ukrainian parliament passed a series of acts to improve the country’s position in the World Bank’s Doing Business ranking, which is thought to have a stimulating effect on the construction industry as well. 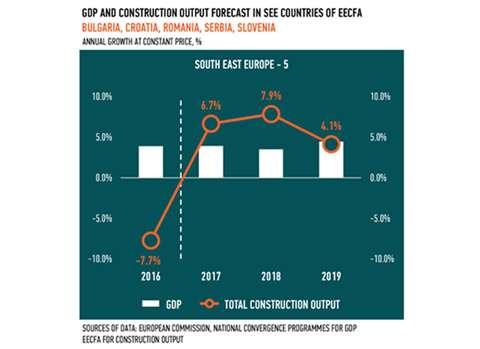 EECFA said the forecast period looked promising, with a probable increase of 7.7% this year, 8% next year and 7% in the year after.

In Turkey, a mixed picture has been caused by the historical revision of GDP figures – the GDP calculation method was changed at the end of 2016. As part of this, construction investment numbers have massively gone backwards after the revision, and consequently, the current market size is more than twice the size it was previously, said EECFA.

As for the outlook, Turkey’s construction is projected to register a 1.4% growth in 2017, while for 2018 and 2019, a 0.8% and 1.0% increase is forecast. The further expansion of the civil engineering market looks like being dragged down by the near-zero growth of building construction, said EECFA.

The ballpark figure for the decrease in Russia’s construction output in 2016 has been revised upwards – from the -1.1% expected in winter 2016 to -0.4% estimated in summer 2017 – as Russia’s economy looks to have come out of recession by the end of last year, with decelerating inflation and the strengthening of the rouble.

That said, building construction in 2017 is likely to be noticeably negative, according to EECFA, but in the years following, the drop will be mitigated by an expected gradual improvement in the economic climate of the country, as well as governmental programmes affecting residential construction.