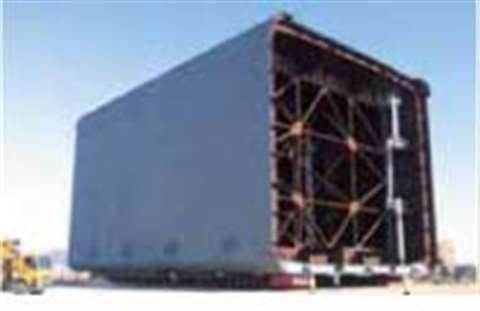 The concrete offshore LNG receiving and re-gasification terminal, known as the Adriatic LNG project, will be the first of its kind in the world and will be 180 m long, 88 m wide and 47 m deep.

Once the construction has been completed the casting basin will be flooded and the terminal transported by sea from Spain to Italy 15 km from the Po river. It will receive natural gas in liquid form from tanker vessels every three days for storage and re-gasification.

The Fagioli team unloaded six tank sections, weighing up to 1,600 tonnes each, from a marine vessel moored at the site's new quay. It then transported them to an intermediate storage area and subsequently inside the gravity base structure.

Since then the company has carried out a range of jobs on the project, including the following:

• Transportation of a 2,400 tonne power generator unit, using 108 axle lines of SPMT made up of six lines of 18 axles plus the final erection with three tower lifts.

• The load-in of a 1,600 tonne electrical instrument building with two, 30 line SPMTs, as well as storage and change of axle line configuration to perform the final erection.

• Final positioning of one of the two breasting structures – load out and load in using four SPMT lines with 14 axles each. Two lines of 32 and 24 axles were positioned inside the GBS basin before the breasting structure was transported close by.

• Two storage tanks, made up of six sections

• Beam and skid tracks with a 7,200 tonnes capacity